We had been growing tea for generations on our large plantation. We knew everything there was to know about the cultivation of the plants, the best time and method of harvesting the leaves and how to treat them to turn them into wonderfully aromatic tea, ready to be steeped and drunk. We even had ships waiting for our teas to take them out into the world. But for the moment, it was time to relax and enjoy a nice cup of Chai: Tea for 2 by Steeped Games. 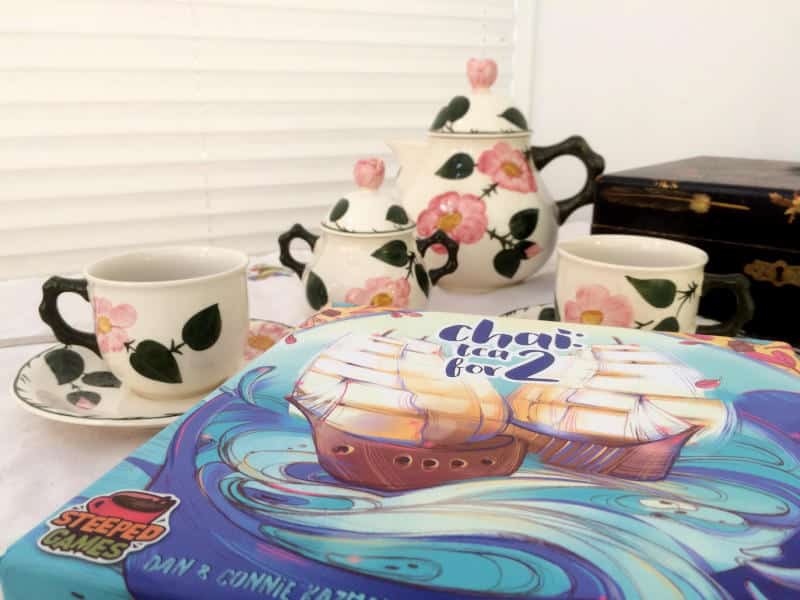 Set in the same wonderful world as the original Chai, the next game from the designers Connie and Dan Kazmaier is also all about tea, but this time players are tea producers who try to make the best tea and get it ready for large sailing ships to take them around the world. The game is also specifically either a solo game or for two players only.

The illustrations for Chai: Tea for 2 are just as wonderful as those for Chai, very vibrant and in a cartoon style that shows that this is another game that is supposed to be gentle and fun. In both games, you’re trying to fulfil orders, which in this game are represented by sailing ships that are waiting for a specific number and combination of teas. Yet, Chai and Chai: Tea for 2 are very different games and they’re aiming at different types of players.

Chai: Tea for 2 is in its core an engine-building game. You will buy so-called market cards, which you attach to sections of your plantation to improve the speed of the production of certain teas. What teas you improve will depend on the ships that have come in and the teas that they need. Every type of tea goes through slightly different processes to become ready for sale, which is represented in the game by the player boards, where the tea tokens move through different paths, some of which take longer than others. In turn, those teas that take longer to produce are also more valuable.

However, there is a lot of player interaction in the game. Everyone has a pool of dice, which represent your workers and all of which are rolled at the beginning of a round. Depending on the dice rolls you get, you can take certain actions. Some require a dice to be a certain minimum pip value, while others need a sequence of dice and others still need dice of the same pip value. There are also spaces where the pip value doesn’t matter, but most actions can only be occupied by one player, so you do have to think about what you want to do first, while also keeping an eye on your opponent’s dice results to see if they feasible can compete with you for a specific action.

As always, you can never do everything you want. Getting a high point value ship is, of course, important, but if you can’t efficiently produce the tea it requires, then those points are worthless. So maybe it’s better to get a market card that improves the production of that tea, but then the other player may sneak the ship from under your nose. There are plenty of decisions to be made and the order in which you take actions is paramount.

It becomes a bit more interesting, because certain action spaces can be “bid” on. For example, you need to place a sequence of dice to reserve a ship, a sequence of at least two dice. However, that doesn’t mean that ship is yours. Your opponent can knock you out by either playing a longer sequence using their dice, or a higher sequence. You can return the favour by adding more dice to your original bid, and this continues until someone can’t or doesn’t want to bid any further. Of course, the more dice you dedicate to a ship, the less you have available for other actions, so it is important to start with a low bid and keep some dice back, in case your opponent wants to compete with you in the bidding war.

You can also increase or decrease dice results by a number of pips, if you discard tea that’s already in your plantation – one pip per discarded tea. That’s sometimes a good idea, but sometimes it means you won’t have enough tea left to complete a ship’s requirements. So it’s another decision you have to make.

There are additional ways of scoring points in Chai: Tea for 2, other than fulfilling ship orders. Some market cards give you points and you also get bonus points for having cards with a specific type of tea. In fact, ship points alone won’t win you the game. Even though everyone tries to complete a certain number of ship orders to end the game, you don’t necessarily win with ship points alone. In fact, you might want to wait before completing another ship order, just so you can get some extra points from market cards.

That leaves one elephant in the room, of course: the history of tea production. The version of the rulebook I have has a section outlining the history of tea production in and export from China and also mentions the Opium Wars. The designers have researched the history intensively and also contacted experts and are hoping to include more detail about the topic in the final rulebook. However, Chai: Tea for 2 isn’t specifically set in a certain historic time and many of the elements are actually from different parts of history and even different tea producing regions of the world. I think the game clearly recognizes historic events and respects them, but it isn’t trying to represent those events in any way and focuses on tea production and distribution in a more generic way.

So let me finish by saying that I think that the game is a lot of fun. It introduces players to dice worker placement, engine building, resource management and objective completion, so is ideal to allow people new to the hobby to learn these mechanisms. The components are also wonderful. The game comes with custom wooden tea tokens, which feel really nice in your hand and the player and game boards are made from really thick cardboard. The card stock is also lovely and the dice are wonderful and chunky.

So if you like a good engine builder, but enjoy a slightly slower pace than some other games, and want to enjoy a cup of tea, or two, while playing it, then Chai: Tea for 2 will be for you.