It was time to build a better future and turn this city around. We knew we had to reduce our carbon output quickly. Our aim was to be carbon neutral. Yet, the road there would be difficult and tough decisions had to be made. Modernizing our housing stock, building wind farms, offering grants for solar panels and everything else would cost a lot of money. If we wanted to move quickly, we might have to accept a temporary increase in carbon output to build factories, that would help us finance the final goal – or we could go slowly and use our existing funds to improve things gradually. We were not alone though. There were a number of others who wanted to become the first Carbon City Zero by Possible. 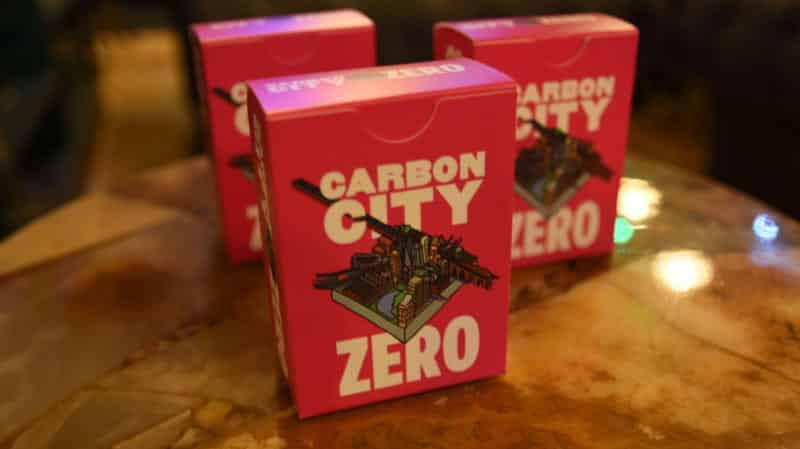 It seems like I’ve got into city building games, see my review of Quadropolis from last week, but Carbon City Zero is very different from that game. Here is a true deck building game. Everyone starts with the same deck of nine cards (not 10 as is usual) and everyone shuffles that deck and then draws five cards, which they play on their turn. Some cards give you special abilities for that turn and most cards give you income that you can spend on buying cards from a central pool. Cards you buy go into your discard pile, unless a special power allows you to do something different, and the central pool is immediately refilled. At the end of your turn, you count up the positive and negative carbon values and adjust your score accordingly.

It’s really all very traditional and exactly what you would expect from every other deck-building game. In fact, you can even have a unique ability by choosing one of the cities provided with the game, just like you might choose a faction in other deck builders. There are also cards that can affect the cost of new buildings or the number of buildings available in the central pool, which is also something you see in some other deck builders.

There is only one slight difference in Carbon City Zero that might confuse veteran deck builder players. Instead of life points or energy, everyone starts with a carbon level, which is fine, but rather than trying to increase your energy or maintaining it, in Carbon City Zero you’re trying to bring it down to, well, zero. So instead of attacking others to lower their energy, you’re kind of attacking yourself – but it’s a good thing.

The thing is, Carbon City Zero isn’t trying to reinvent the wheel or put a new spin of the very popular deck building mechanism. Instead, it’s all about the theme, reducing carbon output, and it’s really a teaching tool rather than just a game. The booklet that comes with the game explains the different cards and puts it all into context, helping you understand why certain cards are beneficial in carbon terms.

As you play, you do really have to think about your decisions and marry them up with your conscience. If you build a polluting factory, you do get more income, which allows you to build better carbon-reducing buildings and therefore reduce your carbon output to zero more quickly later on, but in the meantime those factories fill the air with smoke and push the carbon output needle to the limit.

Yet, if you don’t build factories, but instead focus on purely investing in carbon-reducing buildings, you might take longer to get to there, because it takes you longer to get the funds to get those buildings that really make an impact on your city’s carbon output.

The game is a race, so you do want to be the first to reduce your city’s carbon levels to zero, but like with every deck builder, the dilemma is whether you increase your income quickly and take a hit in the short term, in the hope that you catch up and overtake everyone later in the game, or if you can build enough of a lead early on to get you over the finish line first.

I think Carbon City Zero uses the deck-building mechanism to great effect. It’s really easy to teach anyone and really easy to learn, the game doesn’t take long to play, yet you do think about every choice you make and have to learn to live with the consequences. It might just be a card game, but you can really see how different strategies work differently.

I can really recommend this game to anyone who likes deck builders and is interested in our carbon future. The game is printed on FSC certified paper, all profits for the game will be used to make additional copies which will be sent to schools and community organisations – and you can even buy a print-and-play version of the game to print yourself – or play it online on Tabletopia.