“I think everyone agrees. We want to build the best metropolis in the world and we have a great opportunity to do so from scratch. We have a large plot of land that is ready to be built on. We can really create something special here that will make everyone happy. It will be magnificent.” The mayor looks around the room at all the happy and excited faces, until he spots the urbanist. “What’s wrong?” the mayor asks. “Well,” the urbanist replies, “we do have a few challenges. Depending on which architect builds what we can place new buildings only in certain columns or rows of the empty plot’s grid system, and we can only choose buildings from a specific row or column from the available ones. It’s going to be really tricky to build our Quadropolis by Days of Wonder.” 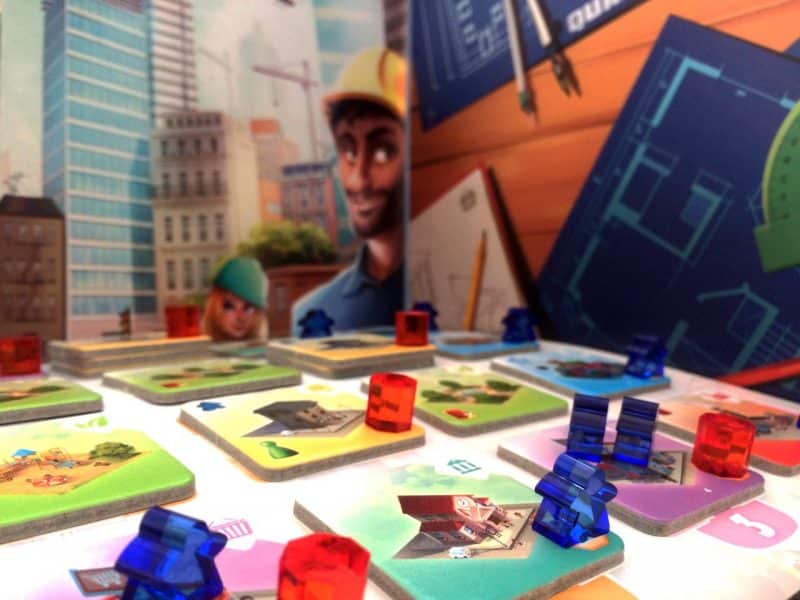 It sounds like a silly intro, but it’s true. Quadropolis is not just a simple worker and tile-placement game. You don’t just pick a tile and place it in any of a number of possible positions. It’s not just about placing it next to other tiles to get the most points and create super combos. It’s nothing like Carcassonne, even though you think it should be.

The first difference is that there is a five-by-five grid of face-up tiles that you can choose from. There are tower blocks, parks, shops, factories, harbours and public services, each scoring in different ways, usually based on what they’re next to.

The problem is, you don’t just pick a tile and place it into your five-by-five square city however you choose – that would be way too easy. Instead, you have four different architects (five in the expert mode), numbered 1 to 4. Depending on which one you choose and where you place them, you can only choose a specific building from the face-up tiles.

For example, if you choose architect 2, then you can only pick the building in position 2 of whatever row or column you place the architect. Now you have to place that building tile anywhere in row 2 or column 2 of your city. You can see how hard it is to get the right tile to fit in the perfect space of your city.

It really does your head in. Mind you, it’s surprising how often you are still able to get a building tile that will work in your city. There are usually two or three very similar tiles available, so even if you don’t get exactly the one you wanted, you will still get something very close to it.

The game does become very much about player interaction though. If you have the choice between two or three tiles, you will go for the row or column that will block your opponent from getting the tile they want. Quadropolis really encourages this way of playing, making it less of a happy family game and more of a strategic gamer’s game.

Even if you play nice, the game still requires a lot of thinking and planning ahead. It’s not the sort of game you want to get out for some quick, light fun, even if the illustrations seem to make you think it is. I would say, it’s very much at the level of Ticket to Ride, when it comes to brainpower needed, and definitely nowhere near Carcassonne‘s type of thinking.

It also doesn’t help that the rulebook isn’t very clear. We really didn’t understand how you could use four architects to get the building tile in row 5, column 5. It’s impossible to reach, unless you play the expert mode, where you have access to architect number 5.

However, the components are amazing, as you will see in my unboxing video. I think you come to expect this from Days of Wonder, but the acrylic meeples and energy tokens go beyond that. The cardboard tiles and other tokens are also really thick and will last a long time.

Having the option of an expert mode is great, adding to the replayability, but it also shows that the game is too complex and needs an introduction version to help you understand what’s going on.

So, if you like Ticket to Ride‘s level of thinking and planning, then Quadropolis is definitely worth a look. If you want just a light, fun game, then do give Carcassonne a go instead.