It is the 11th century AD and the Vikings regularly invade our lands, while my domestic rivals try to forcefully take territory from me, without much luck. My military prowess is well known and I prove myself again and again, while also forging political alliances by strategically arranging marriages between my family members and other important houses. I even have time to rebuild the many monasteries in my realm, bringing the Church and its wealth onto my side. My name is Brian Boru: High King of Ireland by Peer Sylvester from Osprey Games. 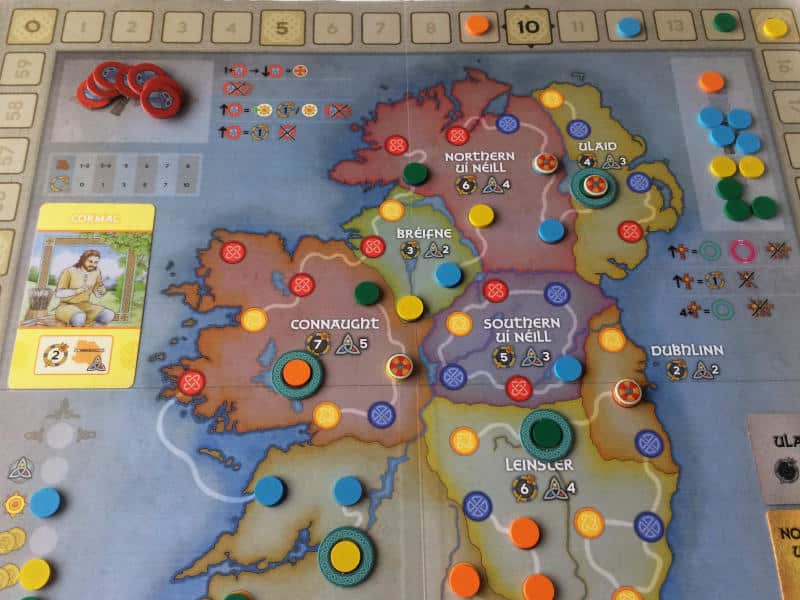 Here is a game that’s based on an important figure from Irish history who was accomplished in many things: repelling Viking invasions, winning battles with his fellow countrymen, creating political alliances through marriage and forging ties with the Church. The game clearly tries to emulate its namesake by attempting to excel in as many different skills as Brian himself did, combining trick-taking, area control, winning the majority in as many as three different categories and heaps of player interaction into one massive game with a playing time of an hour to an hour and a half. If that doesn’t sound impressive, then I don’t know.

Peer Sylvester is famous for many games and is a designer that I have come to love recently. I especially took a shine to The King is Dead (2nd Edition), which is such a clever little game – but you can check out my review for that yourself. So when I heard about Brian Boru and heard it was by Peer, I was getting rather excited. As I read more about the game, I was reminded of The King is Dead. My expectations went up even further.

Of course, the two are very different games. There are elements that feel similar, but that’s really only superficial and is possibly down to the fact that both games are about gaining control in regions, without necessarily having direct influence over them. Mind you, even that isn’t really true.

What really made me want to play Brian Boru was that it has a trick-taking element to it, without requiring players to know anything about what trump means, suits are, let alone what following suit actually means. That really got my attention, because it has now been a long-standing goal of mine to teach my games group trick-taking. I grew up with these games and it would be wonderful to get my friends into playing these with me.

I had previously hoped The Crew would be the game that is the way into trick-taking for my games group and even though I still think it’s one of the best games to achieve this, it eventually failed me when my friends just didn’t get on with it. Don’t worry, The Crew redeemed itself. My wife and I still enjoy playing it and I got to play it with my parents as well. So it’s still close to my heart.

My point is that I had set the bar for Brian Boru very high – even higher than the game set for itself by comparing itself to a historic figure who was successful in so many ways. The question is now, whether the game has met my expectations or if it fell terribly short and let not only me down, but also let itself down.

I think it’s really well implemented and really allows everyone to learn about trick-taking as they play the game. Someone in my games group was telling me after we had finished a game of Brian Boru how in one round they had had cards of mostly one colour in their hand, which allowed them to control the tricks. In another round, they had had high cards of all different colours, which also allowed them to win most of the tricks. These are all things that seasoned trick-taking players will know about. So it proves to me that this game will make trick-takers out of my games group yet.

Once a round of trick-taking is over, the next phase of the game gets rather complicated and feels a little cumbersome. We had to refer back to the rulebook several times throughout every game, even though there is iconography on the board that tries to help players get through this process more quickly. A lot of it is about having the most tokens of a certain type or being the highest on a track, but sometimes ties are broken in a certain way, while other times ties lead to nobody getting a benefit. It’s not easy to remember, but after a few rounds, you slowly get there and tend to remember what to do.

It’s this second phase that is crucial though, because winning tricks and claiming towns on the board isn’t the only way to victory. If you were able to gain enough Viking tokens, you can ransack other players’ towns and really cause havoc on the board. For the most influence with the Church, you can place monasteries in one of your towns, effectively doubling its influence. If you’re highest on the marriage track, you gain points and are able to claim control of a town in a specific region.

All of these things are really important, so you can’t just focus on one thing, but need to try and have your hands in several things at the same time: a bit of protection from Vikings, some influence in the Church, maybe get married from time to time and also get enough towns out onto the map.

It’s a really tricky balancing act, because you can’t do it all, but you need to do enough of everything and definitely avoid specializing in only one thing. It’s the trick-taking phase that makes all of this possible, so every time you play a card you have to check the situation on the board and make decisions accordingly, winning or losing tricks as appropriate.

It sounds like there is a lot to do in Brian Boru, and there is, but the game is over more quickly than you think. Games will last between an hour and an hour and half, unless you’re really taking your time. Yet, in that relatively short time, a lot of things happen and the map changes dramatically. Scores are also always tight, so it’s important to grab every single point you can get – it might give you the victory at the end.

Brian Boru: High King of Ireland is a really wonderful game that has not only done what it set out to do and met its own ambitious goals, but it also smashed through the bar that I had set for it. It’s the sort of game that I will keep in my collection for a long time to come.

One last thing, which I probably should have mentioned earlier, are the components. Apart from a few baggies, everything is either wood, cardboard, card or paper. There are wooden discs, cardboard tokens, as well as cardboard money, so I suggest using poker chips instead, some reference cards and a few decks of cards and the main game board. It all feels very high quality and even though none of it is spectacular, it’s perfectly appropriate for the game.

So, don’t be put off by trick-taking, but embrace the spirit of Brian Boru and excel in everything.