The following article was written by Laurie Trueblood of Adventures of Authenticity.

As a kid, family game night was a staple and we had that one closet that always seemed to overflow with board games. As I got older, I added tabletop RPGs like Dungeons & Dragons and video games. And while gaming has always been a part of my lifestyle, I never really saw it as beneficial beyond just something to do for fun. But according to scientific research, tabletop gaming is actually quite good for you.

Some of the most notable benefits are lessons learned through gaming. For example, a 2011 study on the transformational power of play found that players learn about consequences and decision-making while gaming. But this understanding extends beyond the game. It is carried over into the rest of their lives and decision-making processes. Other life lessons learned from gaming include patience, critical thinking, and resilience. 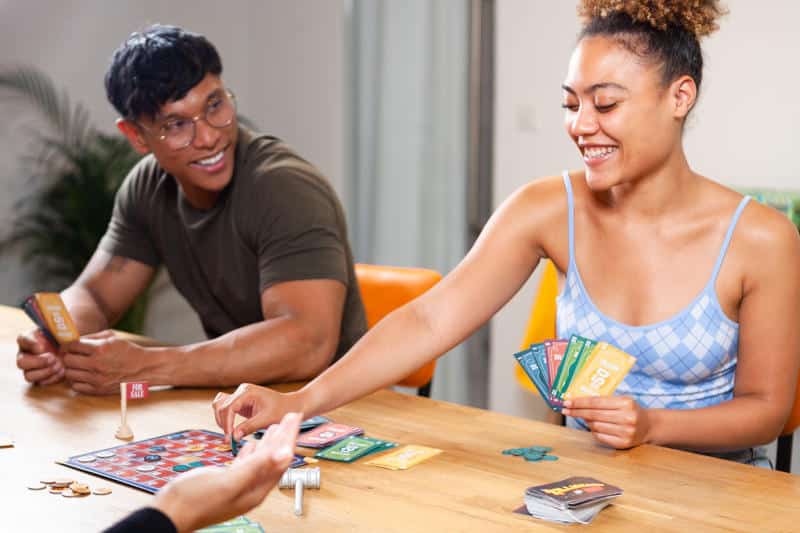 Gaming also teaches new skills and knowledge. There are numerous examples of game-specific educational benefits. These may range from learning geography in Ticket to Ride, ancient history in One Card Wonder or even bird habitats in Wingspan.

Doctors are also looking at the power of tabletop gaming as a teaching tool. When used to teach patients about specific health conditions as part of their overall therapeutic efforts, scientists saw significant improvements in patients’ health knowledge and attitudes. Additionally, participants had lower anxiety levels related to their diagnosis post gaming.

Beyond building knowledge and skills, gaming also has multiple brain-boosting benefits. For example, a 2014 Korean study found improved cognitive function and brain activity in tabletop gamers. And a study in Frontiers in Human Neuroscience found that the action of gaming actually changes our brains. Researchers found that as we move from a beginner to a more advanced player, there is a change in the volume of grey matter in our brains, particularly in the areas of cognitive function and decision making.

Gaming also increases our creativity. A study in 2021 on board games and their creative potential found that gaming improved divergent thinking capacity and, at least while playing, temporarily, improved originality of thought.

Tabletop roleplaying games have specifically been noted for giving players boosts to creativity. A study on Science Direct noted that TTRPGs players had higher scores on creativity versus non-players. Additionally, this study showed that these tabletop gamers had a higher level of divergent thinking, which is connected to creativity, than their digital gaming peers.

These brain benefits from gaming extend well beyond the tabletop. One hour of strategic board gaming can significantly enhance our prospective memory. And these benefits have lasting effects.

Tabletop gamers that regularly play non-digital games scored better on memory and thinking tasks well into their 70s and to a greater degree than their non-gaming peers. A French study in 2013 even noted that board gamers had a 15% lower risk of developing dementia than non-players.

All of these brain benefits are good for our overall mental health as well. Several studies have shown that gaming is good for stress relief. And there are many reports of the use of gaming as a way to help reduce symptoms of depression and anxiety.

Gaming has even been suggested for use in specific medical treatments. Two notable reports of medicinal use of gaming include a study where gaming resulted in improvements in the cognitive function of ADHD patients and another where Alzheimer’s patients had a significant decrease in the severity of their symptoms after adding gaming to their treatment plan.

In light of the many benefits, several organizations now use gaming as part of mental health treatments. Tabletop gaming is a valuable tool for therapists and counsellors, from Dungeons & Dragons groups for troubled teens to board games developed specifically for psychotherapeutic purposes.

Beyond the brain impacts, another significant mental health benefit from gaming is socialization. Few tabletop games are solo. The author of Eurogames even went as far as to suggest that socialization is the main reason that we enjoy playing tabletop games.

Playing games brings us together, from the outsider that finds acceptance to the timid individual that gains self-confidence through gaming. Tabletop games are a way to connect and feel safe to open up to others.

A study in the Journal of Personality and Social Psychology found that the cooperation and storytelling found in many tabletop games increase our understanding of one another. Their research found that players had significantly higher empathy levels than their non-player counterparts.

For many, this sense of inclusion and empathy extends beyond game night. A 2021 thesis found that players develop a sense of community with other players outside of the game. Just as the readers and listeners of Tabletop Games Blog have formed a community around their love of games here.

The concept of a local gaming community has become somewhat blurred over the last few years as many gaming groups had to move to digital formats during the pandemic, with favourites like Root, Wingspan and Gloomhaven all releasing digital formats since 2020.

Many of these gaming benefits do extend to online versions as well. But not all. There is a fundamental difference between playing online versus in-person, whether it’s physically rolling the dice, hand-painting miniatures, or just the nostalgic smell of paper and plastic that comes with opening a new game or deck of cards.

But the digital versions also lose out on some of the player engagement. A US study on board game development found that some of the “chore” like aspects of gaming are essential. Whether it be scorekeeping, physical moving pieces, or waiting for one’s turn, this functionality is often automated in digital formats. However, according to the research, they are critical for player engagement with one another.

In-person gaming also allows for a greater aspect of socialization than digital gaming. A Swedish report found that participants felt that digital gaming lacked the same feeling of connection-ness that they had in person. Digital games also had fewer side conversations or social engagement beyond strictly discussing gameplay. Overall, they reported a lower sense of camaraderie when playing digital versus in person. Given the major benefit of community and inclusion that tabletop gaming can provide, this loss when moving to a digital format is very notable.

From education and stress relief to literally growing our brains, tabletop games have many benefits to our health and with all the good that they do for us, it’s a great reason to introduce friends and colleagues to your favourite tabletop games this year.

What benefits have you found from your gaming experience? Is it the socialization, mental health, education or the experience itself? Do you think that tabletop gaming is good for your health? Please share your thoughts and experiences in the comments below. I’d love to hear what you have to say.