Nectar, when you think about it, is just a sugar-rich liquid, produced by plants, to attract pollinators. Depending on where in the world you are, pollinators could be humble insects, such as the highly adored, busy bees, or they could be magnificent hummingbirds or other birds, or they could even be bats. A free source of sugar is highly prized, as it will give a quick boost of energy, and possibly a little sugar rush too, which make for a valuable reward for all pollinators. So it’s no surprise that this source of food is one of the new resources in the Wingspan: Oceania Expansion by Stonemaier Games. 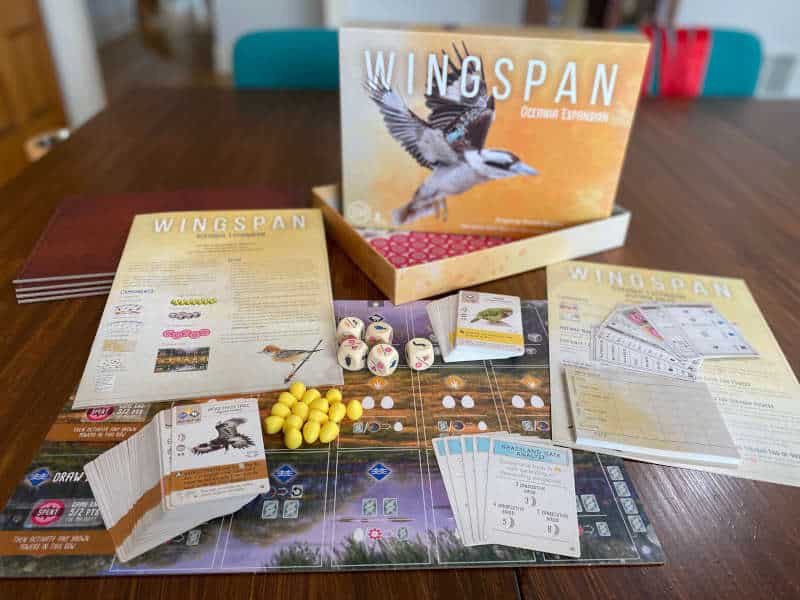 If you’ve read my reviews of the base game or the European Expansion, you will know how much my wife and I enjoy playing Wingspan. So it was a no-brainer for us to also get the Oceania Expansion when it came out. We’ve played it quite a bit since, but because this expansion does change quite a few things which affect how you play Wingspan, it took me a lot longer to get to a point where I felt ready to review this latest expansion – which I don’t think will be the last expansion either.

In this review, I assume that you have played Wingspan and know it fairly well. I only want to focus on the differences between the base game and this expansion. I think, there will be enough to talk about as it is, without going over what the base game already has to offer on its own.

Let me pick up on the introduction of this article and talk about the new food type: nectar. Having a new food type in itself seems quite innocuous, but the nectar in the Oceania Expansion has wide-reaching consequences.

First of all, there is a new set of food dice, replacing the existing ones completely. The food symbols have been re-arranged to make room for nectar, represented by a pink flower, which will have an effect on what food you will be able to gain.

The player mats have also been replaced by new ones. That in itself doesn’t feel like a necessary result of introducing nectar as a new type of food, but it was an opportunity to change how the game is played a little. I’ll get onto that in a bit. There are also new end of round goals, but none of them actually feature any points for nectar. The reason is, that nectar already scores in another way, which is why a new score pad was also added for the Oceania Expansion.

So, let me explain a bit more about the role of nectar. It functions as a wildcard food source. You can use it instead of any other food type in the game – at least for the most part. Some of the birds from the Oceania Expansion require you to pay nectar specifically to be able to play them, but other than that nectar is a really flexible food resource – except for one thing. Nectar is discarded at the end of each round. Any nectar you still have in your personal supply is taken away from you when you score the end of round goal, so you do have to ensure you have just the right amount of nectar. Use it, or lose it, as they say.

The expansion also comes with new eggs: yellow ones. They’re nice, but as with the European Expansion, the colour doesn’t have any function in the game and is purely visual. What does have a new function in the game are the 95 new bird cards, some of them have a new bird power, a yellow power, which happens at the end of the game. That’s a really interesting idea and does influence the last few rounds of the game, which previously were all about laying eggs.

In fact, it’s not just the yellow bird power that changes how the game plays. The new player mats’ egg laying action has changed. Whereas before you would be able to lay 2, 2, 3, 3, 4 and 4 eggs (from left to right) as you were improving that row, in the Oceania Expansion you are now only able to lay 1, 2, 2, 2, 3 and 4 eggs. So unless you’ve been able to play a lot of grassland birds in the game, your egg-laying ability is a lot lower in this expansion. That does really address what you do in the last few turns of the game. It’s no longer an obvious choice to lay eggs. More often than not, you’re focussing on getting more nectar out and playing birds with yellow, game-end powers.

There are more things in this expansion, of course. There are five new bonus cards and new Automa cards and rules.

The component quality of everything in the latest expansion is really outstanding. Stonemaier Games has set the bar high – not just for everyone else, but even more so for its own games. From the new cards to the new player mats and the nice dice, the quality of the expansion components is just as high as those from the original game.

Additionally, the new cards are really well colour-matched. Of course, if you’ve played Wingspan a lot, you will be able to tell the difference between the fresh, new cards from the expansion and the old, much-loved ones from the base game. However, colour-wise it’s very close and very hard to tell them apart.

It’s actually really nice to get a bit of a refresh from the Oceania Expansion. Our player mats started to look a little worn around the edges, so having a fresh set that replaces the original ones is a welcome bonus.

What is really nice is that you can mix the base game with all the expansions or just choose one or the other. You can be as flexible as you like. I suggest, you just play with the Oceania birds to start with, just so you can see how they work, but we felt we quickly wanted to mix in all the birds. It makes for a huge deck of bird cards, but it’s a lot of fun.

The next question is, if everything fits into the original box. The answer is: it depends. You can easily fit the base game and the Oceania Expansion in the box. Just bear in mind that you will remove the original dice, player mats and score pad. So, that’s fine.

The problem comes, when you want to have the base game, the European Expansion AND the Oceania Expansion in the same, original box. They won’t fit. In fact, the bird cards alone won’t all fit in the plastic card tray. You do have to be a bit “imaginative” here. However, you can fit the eggs and food tokens into the plastic boxes without any problem, which is nice.

Overall, I do think the Oceania Expansion is a worthwhile investment. If you love Wingspan and have played it a lot, then this expansion will shake things up and make you tweak your favourite strategy to accommodate the new food type and player mats. Where the European Expansion introduced some smaller tweaks, Oceania changes the game quite a bit – and for the better.