Building the Colossus was going to require a lot of resources. Some iron for the base, many carefully hewn and ornately dressed stones to create a strong structure that would represent our most revered sun-god Helios. Chares, the sculptor, oversaw the project from start to finish to ensure the Gods would smile on us and our country’s fortunes well into the future. We all knew it was going to be hard work, but it seemed that the Gods helped us along and building the whole structure was over more quickly than anyone expected. In fact, it was so quick that we couldn’t wait to build yet another One Card Wonder by Ape Games. 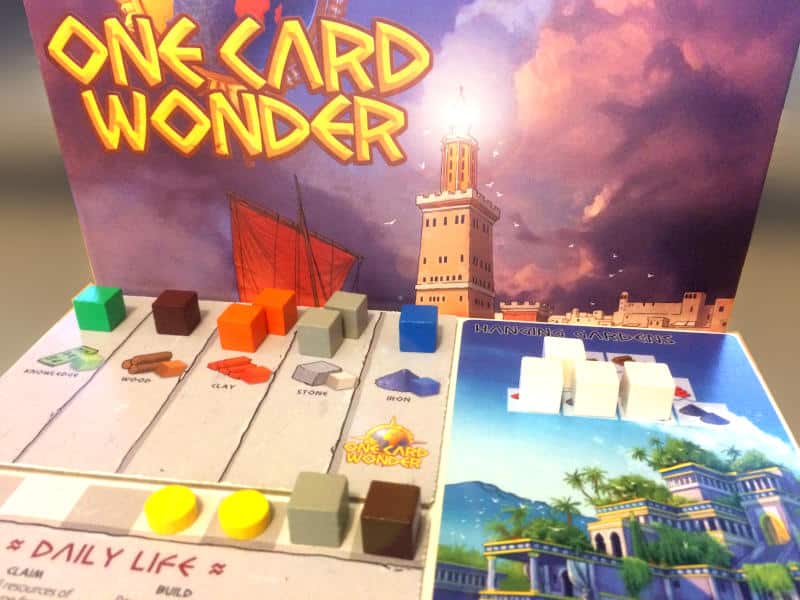 As the introduction says, One Card Wonder is a really quick game to play. The rules seem complicated to start with, but then most rules do. However, when you start to play, everything starts to flow really quickly and it’s a game that you can teach people as you play it, which I love.

Every player can carry out one of four possible actions: produce resources, claim all of one resource from a central market, sell pairs of resources for coins, which function like wildcard resources or build parts of their wonder and/or one building that will enhance one of the base actions. It’s pretty simple and at the beginning of the game you will mostly produce, then you might start building, later you might claim or possibly sell. That makes it ideal to teach each action as you go along.

However, at the moment, none of this probably makes much sense to you. So, let me start at the beginning. As indicated in the introduction, your aim in One Card Wonder is to build some sort of giant structure. The game comes with 14 of them, all of which you will recognize as famous monuments from ancient history, such as the Colossus of Rhodes, the Great Wall of China, the Pantheon and so on. The cards are beautifully illustrated and each structure is represented by a number of squares, arranged roughly to represent the shape of the monument and each square shows a number of resources that you have to spend to build that part of the wonder. Of course, like real structures, you do have to start at the bottom and work your way up.

One Card Wonder is a race game, where you have to take your actions as efficiently and effectively as possible to be the first to complete your structure and win the game. However, there is also a luck element, because you can’t just produce the resources you need when you need them, but you randomly draw from a bag filled with resource cubes – and each resource is limited, so it’s possible that two or more players vie for the same resources at the same time.

I feel the luck element in One Card Wonder is not too large though. Yes, you can have really bad draws and just not get the resources you need, but most of the time your structure needs a variety of resources, so there is usually something you can do. Also, you can trade pairs of resources for coins and those can be used in place of any resource you want.

Additionally, when you produce resources, you draw three cubes from the bag, keep two for yourself and put one into a central market. So that market will start to fill with resources that other players may need and on their turn they can take all cubes of one resource type, which can be really useful, once the market has started to fill up a bit more.

So, yes, there is luck, but I do think you can mitigate it pretty well. Yet, there have been games I played that ran to the wire. Everyone needed to build just one more section of their structure and it came down to whoever drew the resources they needed. The thing is, I actually really enjoyed those games. It felt exciting to see who would draw what they needed first and even though the winner was based on a lucky draw, I still felt I had achieved a lot and really didn’t mind losing at all.

In fact, seeing your structure grow is one of the most enjoyable parts of One Card Wonder. I love games where you feel like you’re achieving something and in this game you definitely get that feeling a lot. So even though you’re playing against other players, you’re also just focussed on your own monument a lot and get satisfaction from building another two or three sections on your turn.

Also, games last less than half an hour, so you can easily play it several times in a session to try and balance out the luck element. After all, nobody should have the same luck every game, so if you feel cheated by a bad draw, then you can just decide to play for best out of 5 games.

There is a bit more to One Card Wonder though, which will appeal to people who like engine building in games. When you take your build action, you don’t just build parts of your structure, but you can also build buildings – up to four of them. Those buildings will either give you an immediate benefit or they enhance one of your base actions. The buildings that you can build depend on which player mat you have chosen and there are 11 of those in the game, giving you plenty of choice. There are also buildings on each monument, creating even more variety.

It creates an asymmetric setup and means you have to change your strategy slightly depending on which player mat and monument you have chosen or rather, you should choose your player mat based on the monument you want to build and vice versa.

The buildings are another way of mitigating unlucky resource draws, as they will allow you to use your resources in more flexible ways, such as giving you the power to replace one resource for another when you build, or allowing you to sell one specific resource at a 1:1 exchange rate for coins. However, you don’t have to build any of your buildings to win the game. Sometimes you’re better off putting all your resources towards building your wonder, but if you just don’t draw what you need, then building buildings is the way forward.

So, if you’re fascinated by the Seven Wonders of the World and other famous monuments from ancient history, then you can try your hand at building them in this quick, fun, easy to teach and easy to learn resource management race game. One Card Wonder is a huge joy to play and very addictive indeed.