It was quiet in the deep, dark wood. Everything was still and nothing stirred – but everyone was ready. The cats had taken up their position in every clearing, six birds were waiting patiently by their roost in one corner of the forest, the racoon had taken cover deep in the woods and the crows were biding their time in a handful of clearings of their choice. The moment was near. It was time to decide who was the best animal in the woodland, who was the Root by Cole Wehrle from Leder Games. 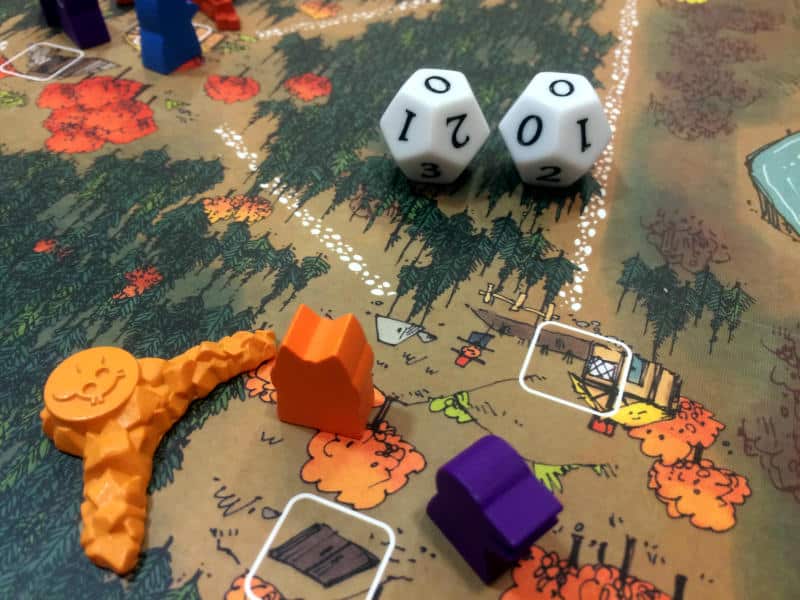 I previously reviewed Root in digital format, when my games group was unable to meet in person, but now I have finally been able to play the physical version of this game, thanks to a friend of mine who has bought the base game, plus pretty much every expansion you can get for this great asymmetrical, area control, hand management, set collection, programming kind of a game.

Yes, Root is very hard to put into a pigeon hole, not because pigeons aren’t currently a faction in the game, but due to the fact that every faction does things quite a bit different to every other faction. Sure, everyone plays on the same map, everyone tries to get to 30 points first, everyone draws from the same deck of cards and everyone has wooden and cardboard tokens to manage, but how all of these are used and what they can do is vastly different for everyone.

Learning Root can be a bit tricky, but consider downloading the digital version and playing its tutorials. That’s the best way to learn the game, in my view, if you have nobody to teach you. However, if you already know the rules, then introducing someone to Root isn’t too much of an issue, because every faction’s player board has the setup printed on its back, alongside an outline of what the faction does, and then the front of every faction board describes in enough detail what you can do and in what order. You basically read what it says and then do what you can do and what feels right. After a handful of turns and with a little help from the rules teacher, everything will make sense.

For someone who has played the digital version a lot, seeing all the rules for your faction clearly printed on your player mat is also a godsend, of course. It can be quite daunting trying to work out what you can and can’t do on your turn, if you’ve always relied on the computer to tell you your possible options, but there is nothing to worry about when you play the physical game. As I say, just read what it says on your board and you will be absolutely fine. It’s all there, from the different phases to how many cards you need to discard down to at the end of your turn and everything else.

Another reason that makes Root easier to learn for new players is that there are so many factions. The base game comes with four and there are plenty of expansions that add many more. So it shouldn’t be too much of a problem to find a faction that suits a player’s style, which makes it easier for them to learn how to play and which will make the whole playing experience a lot more enjoyable.

So, growing your Root fan club shouldn’t be too much of a problem.

The physical components in Root are absolutely wonderful, of course. All the components are high quality, from the super thick game board and player mats, the thick cardboard tokens, the wonderful stock for the cards, to the wooden custom animal warrior meeples and the super chunky dice. It looks great on the table and nothing feels fiddly or cumbersome. It’s a pleasure to plonk your warriors on the board and move them around. Holding the cards in your hand is really enjoyable too.

My friend, whose copy we played, also bought the card sleeves, which have a custom printed back, which makes them all look very appealing. Personally, I prefer to play without sleeves, but if you want to protect your financial investment in this game, then protecting the cards does make sense, of course.

Something that you don’t notice in the digital game, but that feels really horrid, is that the battle dice are rolled by the attacker. The defender will not get the satisfaction of rolling a dice, which makes sense, because the attacker gets the higher result, in most cases anyway, so they should roll both dice. It’s a little thing, but I think it’s so fitting that the defender just sits there, hoping that the attacker has bad dice rolling luck. Other than playing an ambush card, there isn’t really anything else you can do as the defender. It’s perfect!

Another thing I think is worth pointing out, and that’s not limited to the physical version of the game, is the fact that Root can feel like a multiplayer solitaire game, because everyone is occupied with working out what their faction has to do to win. It’s only halfway through a game that you start to look at others and then start to try and stop the faction in the lead from winning. Of course, once you’ve played your faction a few times, when it has become almost second nature, the meta of the game develops and you will focus more on what others are doing and how they’re scoring points.

However, even when you lose by a mile, which you usually don’t in Root, you don’t mind, as long as you feel you’ve done the best you can with your faction. The multiplayer solitaire feeling helps with this. You can focus on your faction and try and play it better than you did before and as long as you do that, you have a really good experience and will enjoy the game, irrespective of how many points you have gained.

Generally speaking though, Root is the sort of game that gets better, the more you play it and as so often with these types of games, I strongly advise you play the same faction a few times back-to-back, so you get used to it. Only then change to another and try and learn that. That way you can help anyone who plays your faction after you and give them tips. It’s a great way of learning the game together and exploring the factions.

Of course, if you do get bored with the base factions, which will probably be many dozens of plays later, there are many expansions that add a lot of interesting new animals to the woodlands which will keep your interest going for a very long time to come.