It was an outrage! The Eerie had invaded our peaceful clearing. They blatantly ignored our sympathy. Those feathered warriors would regret it. The next birdsong would be full of revolts and they would rue their decision. Using guerrilla tactics, we would show everyone not to mess with us. We weren’t as defenceless as we looked. We would solve the problem and get to its Root by Leder Games. 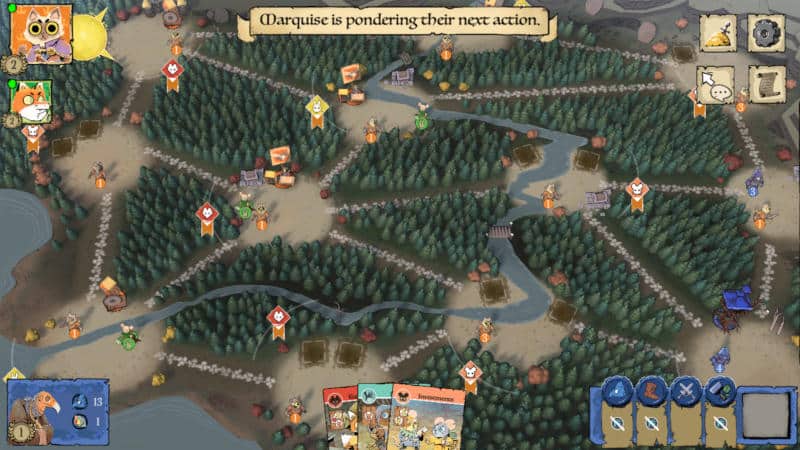 Root is another great game in Leder Games‘ series of four-letter games titles where the base rules are the same for everyone, yet every faction plays very differently. It’s almost as if everyone plays a different game, yet we all play on the same map and are pitted against each other. It shouldn’t work, but it does – and it does it very well. It’s very clever and hurts your brain when you try and work out how Cole Wehrle has done it again.

The game is set in a woodland, with a number of clearings, which are connected by paths and the factions are woodland creatures. It all looks very cute and cuddly, but these woodland creatures can be fierce fighters and happily backstab you, while at the same time giving you a big smile. Don’t trust any of them, because everyone is in it to win it.

In Root, you basically try and control as much area as possible, but that in itself doesn’t actually give you any points. Actually, unlike in other area control games, you can easily have your warriors in a clearing that is controlled by someone else, and in theory, you both can peacefully co-exist.

The thing is, one of the ways of getting points is by attacking other players and removing their tokens from the board in battle. So, even though you do actually happily share clearings with other factions for much of the game, you will also have a lot of fights with them so that you gain points.

The battles themselves are very simple. The two players taking part in the battle roll a twelve-sided dice, which will result in anything between 0 and 3 hits. The attacker will be allocated the higher result, the defender the lower – unless you’re the Woodland Alliance, who have the guerrilla war ability, giving them the higher roll in defence.

Your hits are then limited by the number of units in the clearing where you’re fighting, so if you only have two units, then rolling a 3 will still only result in 2 hits. You can also play certain cards to increase the hits you achieve as an attacker or defender. Then you remove the relevant number of units from the board and the battle is over.

Another way of gaining points is by “crafting” cards. Depending on which and how many clearings you control, you can craft certain cards from your hand. So area control is important for this, but again it’s not about sole control, but having a majority in a clearing.

You do have to decide which cards you want to craft, because many factions will want to use their cards for their faction-specific ability. Each card belongs to a suit, just like each clearing is allocated a specific suit, and it’s those suits that will decide some of the things you can or cannot do on your turn. As so often, you have to decide whether to craft a card for an immediate point, or keep the card for its suit. You also have a certain hand limit, which again will make it hard which cards to keep and for what purpose.

Overall, hand management is actually really important in Root. You want to keep certain cards to help you in battle or to craft for points, but those same cards can also be very useful for other actions, depending on the faction you play. The cards are almost the most critical part of everyone’s strategies.

Of course, there is a lot more to Root, because a lot of the gameplay results from the interactions of the different factions. Depending on which animals are in play, the game is very different. So even if you play the same faction every time, you will have to adapt your strategy based on which factions you’re up against.

The base game comes with 4 factions, which will keep you busy for quite some time, and there are a number of new factions available and more in the making, which will keep changing how you play Root. It’s one of those games that is likely to keep evolving over time, even though it will always remain the same game at its core – which is amazing.

Even though I can’t comment on the component quality, because I only played Root in digital format on Steam, I can say that the artwork by Kyle Ferrin is amazing again. His style is always so very recognizable, fits really well with the setting and nicely ties the various Leder Games games together.

Speaking of playing Root only digitally, it’s the way I suggest you learn to play the game. The Steam implementation comes with a really great tutorial mode that makes it really easy to learn the basic gameplay principles, as well as how to play each of the four factions.

I must say, I’ve never been a fan of Leder Games‘ rulebooks, as I find that they don’t teach me how to play very well. You have the rules, a “learning to play” guide and a walkthrough, each giving you some glimpses of what you need to do, but none of them working coherently to help you fully understand the game. So I do strongly recommend you learn from the digital tutorials, because playing Root is actually a lot easier than it might seem.

The complexity of the game doesn’t come from the rules, but how you need to play each faction in such a way that you win while stopping someone else running away with a huge lead. It’s that part that creates a lot of wonderful table talk, as players form temporary alliances to stop the leader from gaining any more points, until the time is right for the alliance to be broken and players trying to aim for victory for themselves.

So if you like a game where everyone is out for themselves, but chances are you do have to form some uncertain truces to stop someone else from winning before you, then Root is definitely worth a closer look.