The city-states of Venice, Florence and Genoa and their economy were doing extremely well. However, their military strength was extremely lacking not only in size, but also in experience and conviction. It was clear that strong soldiers with real battle experience were needed. So when the English soldiers returned from the Crusades, they were welcomed with open arms. Finally, the city-states would be able to extend their reach and influence, thanks to the wonderful Condottiere by Dominique Ehrhard, Duccio Vitale and Justin Kemppainen from Z-Man Games. 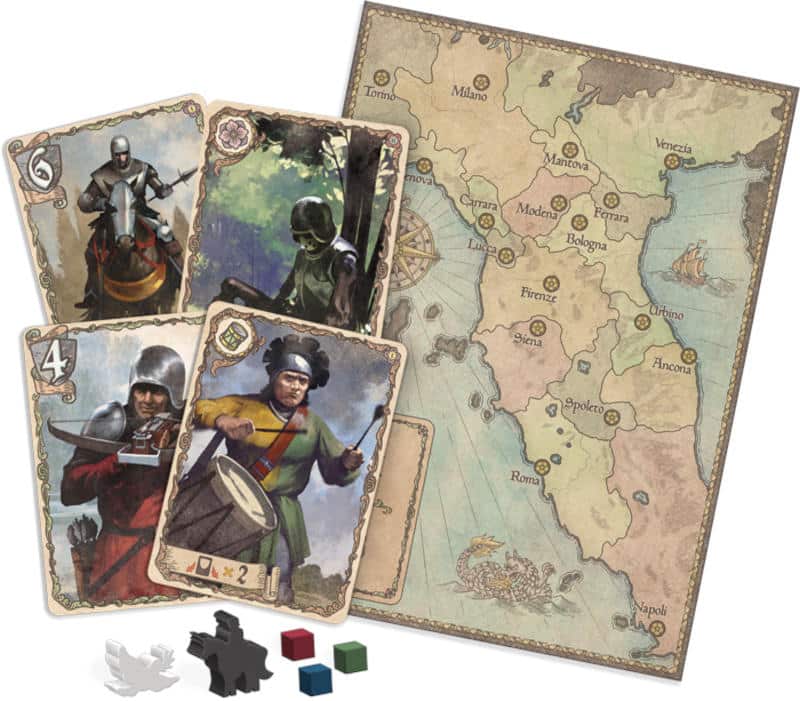 After having played The King is Dead (2nd Edition) many times and enjoying it a lot, a friend of mine came across Condottiere and thought it would be a wise investment. Both games have a lot of similarities, but there are also a few key differences that give each a unique feel.

In Condottiere, you represent a region in Italy and your aim is either to control three connected regions or five regions overall, irrespective of whether they’re next to each other or not. Everyone starts with a hand of 10 cards, but these cards are drawn from a shared deck of over 50 shuffled cards, most of which represent a condottiere, an English soldier, with a strength between 1 and 10. It’s mainly these cards that decide who wins control of a region. There are also a number of special cards that have different effects, some of which also add to your military strength, but are usually played for their action.

Similarly to The King is Dead (2nd Edition) everyone takes turns playing a single card from their hand or passing. When you pass, you can no longer play any more cards in the current round. So it’s up to you if you want to play a lot of cards now to ensure control of the currently contested region or if you keep cards back to give you a better chance of winning the next region.

Hand management is everything in this game. Your hand of cards only gets refilled when everyone, but one player, has no cards left. So it is possible that you end up having to sit out a round and watch helplessly how other players take control of a region you were hoping to control yourself.

Condottiere feels more like a game of poker, because you do want to bluff and pretend you don’t have a strong hand, so that you can win a round without having to play your high cards. At the same time, bluffing isn’t everything and a lot of the skill in this game is about making the most of the cards you were dealt, deciding which ones to play now and which ones to keep back, as well as passing at the right time or pushing for victory when you know you’re safe to do so.

It’s wonderful to see when someone suddenly pulls out an action card that doubles their points, after having played only strength 1 condottiere cards up to that point. So when you think you’ve got this round in the bag, someone can easily turn everything upside down and you end up having played great cards for no benefit, leaving you in an even weaker position for the next round. I think it’s these moments that make this game so much fun.

Despite their similarities, Condottiere and The King is Dead (2nd Edition) are very different games. While the latter feels almost like a game of chess, in a weird sort of way, the former is much lighter and much more tactical than strategic. You play the cards you have been dealt and have no idea what cards others might have, so you can’t make any decisions about how good or bad your hand might be, compared to others.

So while in The King is Dead (2nd Edition) you can build a decision tree, very much like you would in chess, in Condottiere you often have to make decisions with your heart and hope for the best, relying on your bluffing skills and the one or two action cards in your hand that have the potential to turn the table in your favour.

Condottiere is definitely a much lighter game and scratches a similar itch to The Kings is Dead (2nd Edition) without requiring a huge amount of brainpower. So, if you feel a little tired at the end of the day, then Condottiere is a perfect choice. It’s pretty easy to learn and relatively quick to play. You can easily play a couple of games back to back and probably still have time for a third, all in the same evening – and you will easily have the brain space for it too.

In fact, it’s the sort of game that benefits from playing several times with the same people, because you will develop your own meta of the game. You will start to predict what cards others are likely to play and how to react to that, until they change their approach and surprise you. The more you play the game, the more fun it becomes.