The following article was written by Joe Slack from the Board Game Design Course.

Hey there. It’s Joe Slack from the Board Game Design Course. Oliver was kind enough to let me write a guest post on his blog about victory conditions other than victory points to spark some new ideas and get you thinking about other new games to play. I hope you enjoy this article!

Victory points (VP) are so common in modern board games, along with the condition that the player at the end of the game with the most VP is declared the winner. Sometimes it is called influence, sometimes just points or it may be money or some other resource or currency. But it is all essentially the same thing. So, we’re going to dive into some other fun and interesting ways that players can win a game, along with examples of each. 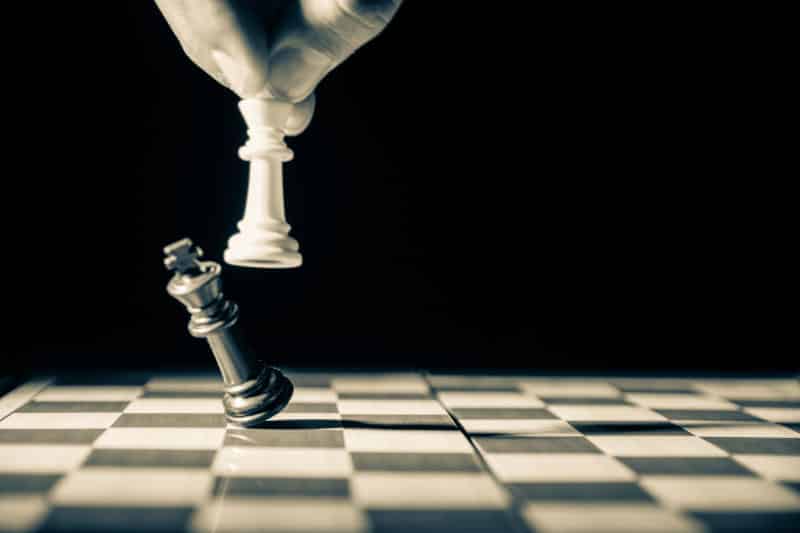 (Photo by GR Stocks on Unsplash)

I will touch on how some of these victory conditions relate to the end game conditions here as well.

So, let’s look at some alternatives to victory points.

1. First to the finish

A first to the finish win condition is often used in racing games or games meant to feel like a race. Often, the game will end as soon as one player crosses the finish line (or this will at least trigger the end game condition).

An example of this is Steam Punk Rally. Well, sort of. You see, once a player crosses the finish line, the last round is triggered, but another player may actually travel farther past the player who crossed the finish line to win the game. Although I haven’t played it myself, Flamme Rouge is another example of a game where you have to be first to cross the finish line to claim victory. Many other racing games are quite similar in this regard.

2. First to X number of points

Another win condition is the first player to amass a certain number of points. This could also be done using money or another resource as well.

A great example of this is Splendor. In Splendor, when a player gets 15 points, all other players who haven’t played yet this round get one more turn. The winner is the player with the most points. Port Royal and Century: Spice Road are very similar in that reaching a certain point value will trigger the end game, allowing any players who hadn’t played yet that round one last turn.

Most modern board games try to be fair and allow all players to have the exact same number of turns by the end of the game, as the first player may otherwise have an advantage. So, this is usually used more as an end game condition than a victory condition, as also seen in the examples above.

If a game is all about eliminating players, it will often leave one lone player left at the end of the game. This player will be declared the winner.

An excellent example of last one standing is Coup. In this game, all players have 2 identity cards. Once both of these cards have been eliminated, you’re out. So, the last player left with one or more cards remaining wins. Another example is a Texas Hold’em Poker tournament. The last player with chips remaining after all other players are eliminated is the winner (usually with a decent cash prize!). This list would be incomplete without mentioning Checkers, in which you win by being the only player with pieces remaining.

4. First to accomplish a goal

Quite often, a game will have an objective or several objectives that players must meet. In some games when a player meets the objective, this simply triggers the end of the game, whereas other times the first to accomplish the goal will be declared the winner.

One example of this is Machi Koro. It has many versions, and in the Bright Lights, Big City edition that I own, the first to obtain all 6 landmarks is declared the winner.

Many co-op and solo games also take the approach of including an objective that must be reached in order to win the game. In Pandemic, you must cure all 4 diseases. In Flashpoint: Fire Rescue, you must save 7 people/animals. In Crystallo, you must defeat the dragon. Conversely, many co-op games also have losing conditions (often multiple), such as running out of cards, using up all of one component, or a danger level that has increased too high.

5. Other victory conditions and variants

Quite often, a game will have an end game or victory condition that will be some variation of one of the above or with some other twist. One that is sometimes common in card games is the first to shed all cards. Uno, President and Zoo Year’s Eve are good examples of this.

Or rather than trying to attain the highest score, some games push you to get the lowest score among all players, such as Dominos or the sport of golf. Blokus also essentially does this, as you want to have the least remaining pieces.

Ending the game with the majority is a victory condition in some classic games like Go and Othello. And of course, there is the famous “capture/eliminate the King (or some other specific piece)” as made famous by Chess but also used in other games like Stratego. A better, more broad term for this would be “capture the flag”, which bears the same name as the outdoor game.

Another objective is to get a certain number of pieces in a row, as you do in Tic Tac Toe and Connect 4.

Some social deduction games give you the victory when you’re able to identify the spy or another character (or get away with being this character if you are the traitor), as is seen in The Resistance and Spyfall.

A party game like Telestrations doesn’t even have scoring! You just play as many rounds as you like before moving on to another game or some other activity.

One final victory condition that comes to mind is causing a stalemate. You are awarded the victory when your opponent can no longer make a legal move. This is another possible winning condition in Checkers (in addition to elimination), however, I’m at a loss to think of other games that use this as a victory condition.

Can you think of any victory conditions that I missed? Please leave a comment and share them here.

Do you have a board game idea? Maybe a game with one of the victory conditions I mentioned above? Wanna know how to turn your idea into a prototype quickly? Check out my 10 Minute Board Game Design Blueprint for free.

Thanks so much for letting me write this guest post for you, Oliver!