Sparkling jewels, shiny gems and precious stones lay in front of you – but only a handful and not necessarily the best example. Your hope was to sell some them for enough profit to be able to buy shares in a diamond mine and attract highly skilled craftspeople who would transform the slightly lacklustre gems into magnificent jewels and allow you to bask in Splendor by Space Cowboys. 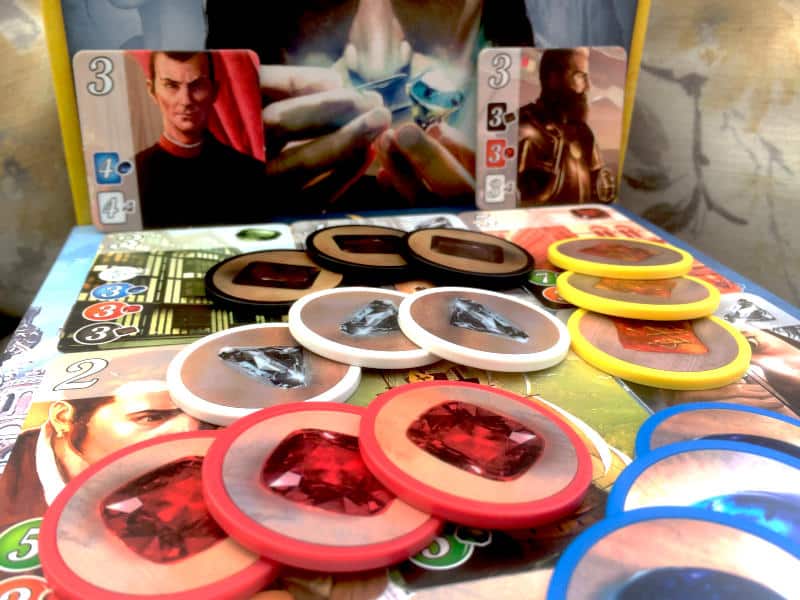 OK, so the theme is really only present in the illustrations, because Splendor really is very much a tableau builder where you buy cards that give you a bonus to afford better cards, which in turn will eventually give you victory points. As you play, you don’t really think about the jewels you’re trading and I often caught myself saying that I need one red, one green, one blue and one black to buy a card, instead of one ruby, one emerald, one sapphire and one onyx.

However, the illustrations are gorgeous and all the components are wonderful. The gem tokens are basically poker chips, really heavy and making the wonderful clunking sound as you stack them. It’s glorious and convinced me that poker chips are more or at least as much fun to have in a game as metal coins. You can see and hear for yourself in my unboxing video.

Playing the game reminds me a little bit of Jaipur, probably because of the similar theme, but also because you’re also doing a sort of set collection. The two games are quite different though. Splendor can be played with up to four players for a start and is much more about building your tableau of gems than just collecting sets.

Splendor is a lot more overwhelming when you first play it though, because you keep trying to plan ahead, but because there are so many cards available and so many different ways to be able to buy them, you don’t really know what you’re doing. Yet, after one or two games, things become clear and you start to understand what you’re trying to achieve and how.

However, when you play your third or fourth game, you will probably find that analysis paralysis sets in and you begin to freeze. Deciding whether to go for the ruby card that will eventually allow you to get the 1 victory point onyx which in turn will make it easier for you to buy the 5 victory point diamond, or whether you instead get a sapphire now to get you closer to getting the bonus points from a noble, whether you just get some more gem tokens, or whether you reserve the 5 victory point card now and get a gold that then lets you buy the sapphire card, is overwhelming. The decision tree seems to get too big for your brain.

Yet, once you have overcome that and relax into the game, making some decisions with your heart rather than your head, the game really starts to flow and six or seven games in, it all starts to feel natural, as if you’ve developed an instinct for what you should do and in which order. You even begin to see what other players might need and maybe block them by reserving a certain card or take the last gem token they might need.

There are many layers to Splendor and you play the game differently and with more skill each time you play it. The randomness of nobles and cards also changes how the game plays every time. Some games will have no diamonds until the end, making it very hard for you to get the noble you want and forcing you to go for other gems to begin with and then, near the end, everything suddenly speeds up, while another game may seem to flow nicely at the same pace from start to finish.

It’s also relatively quick to set up and play, so could be a great filler game. Even though it’s a little bit more involved, it’s actually quite easy to explain and will suit people of different age groups and experience levels. Splendor really is an all-rounder and a game that you will play again and again, maybe not all the time, but it certainly will come out a lot and will be a lot of fun every time you play it.