“Diamonds, gold, silver, cloth, spices, leather,” you shout from your stall into the hustle and bustle of the market. You are not the only trader vying for the many people wandering around the square, most of whom are tourists looking for a bargain. In fact, there is one other trader selling the same wares as you, and both of you pride yourselves on selling the finest goods. Neither of you wants to sell cheap, but if you’re not quick enough, prices will drop and you will end up with a stall full of unsold items. However, what you both want most, over everything else, is to attract the Maharajah’s eye and be granted one of his rare Seals of Excellence in the hope that you will become his personal trader in Jaipur by GameWorks. 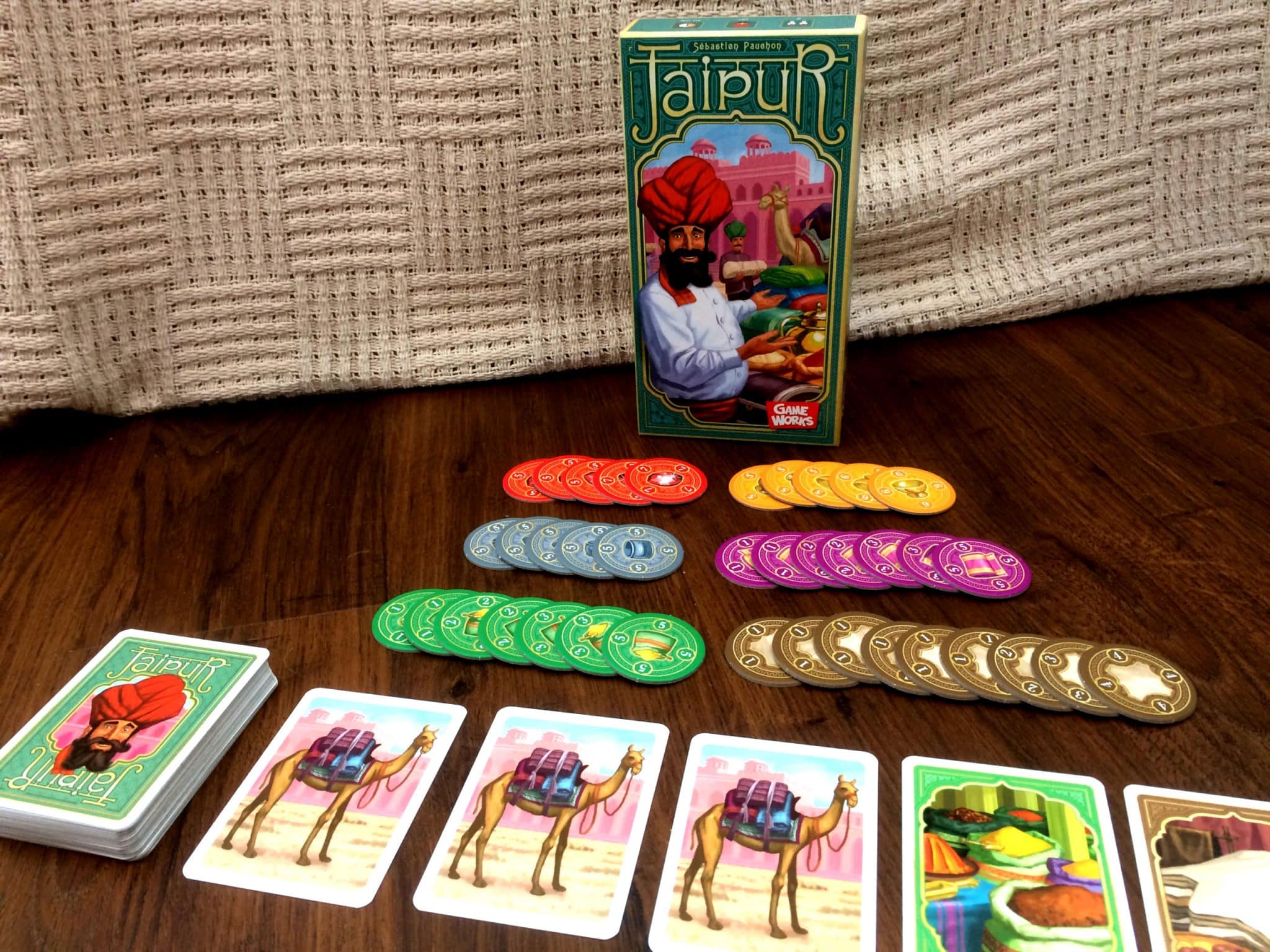 Here is a wonderful, two-player only, light card game, that is really easy to teach and learn, as well as very quick to play. I have played Jaipur dozens of times online at Yucata.de with people from around the world, before buying a physical copy to play with my wife at home.

I appreciate that set collection games aren’t for everyone, often because there is too much luck involved, but I do think that Jaipur handles itself really well in this context. Of course, if the luck of the draw goes against you, you will lose by a high margin. That is why you play the game as a best out of three, so that the randomness is balanced out a bit. However, you will also find that luck alone doesn’t win you the game.

There is a good amount of planning involved as well. A seasoned player f Jaipur is very likely to beat a new player, unless the cards really go against them. After all, you do need to think about whether it is worth you holding onto your set of goods a little longer, in the hope to be able to sell five of them in one go, which will give you a considerable point bonus.

New players may also fall into the trap of reaching their hand limit when the market is full of camels, except for a single card, forcing them to sell their goods to reduce their hand size, or draw all camels, which is likely to give their opponent the cards they need to complete or increase their sets of goods.

At the same time, the game really isn’t too taxing on your brain, and given it usually takes less than half an hour to play, it is the perfect filler game or game on the go. The box it comes in is relatively small, but it’s really just a deck of cards and a couple of stacks of tokens, which can easily fit into an even smaller box, if you want to make it even more portable.

There are also two main modes of play, either the classic version where you have to remember what cards your opponent drew or the open version where new cards are put face-up in front of players, allowing you to reduce the demands on your memory completely, if you don’t like the memory element in a game.

It’s really a very solid game as well. If you have two players of roughly equal experience with Jaipur, you will usually end up with very close points. In fact, it is often surprising how someone who sold their diamonds and gold at the highest prices can still lose against their opponent if they are able to sell five items together, because the bonus tiles you get for selling large sets of cards do really make a huge difference, the more cards you can sell at once.

So I can highly recommend Jaipur to anyone who wants a two-player only game, that is light and a great filler. Despite its age, the game really doesn’t feel old. The mechanisms still work really well and the game can easily compete with other, modern filler games.