Sending someone a letter seems to have become a thing of the past and sending people postcards is mostly restricted to when you’ve gone away on holiday – but it’s been ages since many of us have done that. However, many of us love sharing games with others, so it would be amazing if you could send someone a card that’s also a game and even add a little message. Well, that’s exactly what Six Greetings Card Games by Ellie Dix from The Dark Imp does. 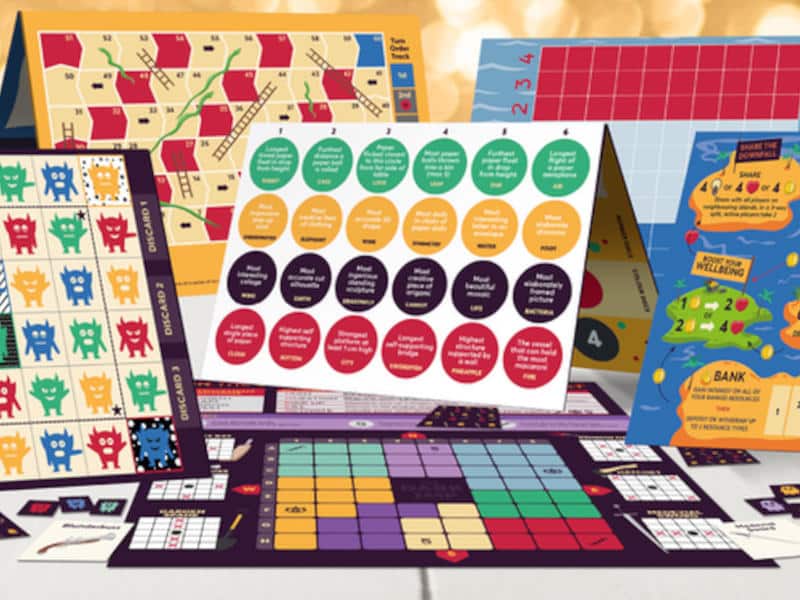 (Illustration courtesy of The Dark Imp)

If you have followed the blog for a while, you probably know that I love small box games, be they mint tins or wallet games. Anything you can take with you and play while you’re out and about is amazing, especially if it’s easy to teach and a lot of fun. The Dark Imp‘s latest Kickstarter ticks all the boxes for me and actually takes the idea a step further. Sure, greeting card games are bigger than wallet games, but you don’t actually take them with you. Instead, you write a short note, put the card in an envelope (supplied), add the recipient’s address, plus the required postage (not supplied) and post it. The recipient will receive one of the six different games and will have a great time.

There is a wide choice of games, so there should be something for pretty much anyone. They’re all aimed at the family, so they’re pretty easy to learn, light games and they’re all competitive, except one. All of the games require a little bit of cutting out and a couple of games require some extra bits, like a sheet of paper or a timer, but everything else is printed on the cards, including the rules. So, within a few minutes, you should be ready to play your game.

There is a co-operative legacy game, a programming game, a worker placement game, an action selection game and many more. Except for the co-operative game, which can be played solo, two of the games require at least two players, while the other three require three players at a minimum. As I say, there is a wide range of options, so you should be able to find the right game for your friends and family.

I really enjoyed playing Enemy Lines, which is a two-player only game, which I initially thought was a variant of Battleships, but which turned out to be a highly strategic game of trying to move your ships from your side of the board to the other, while your opponent would do the same. You have to be careful and plan ahead as well as try and predict what the other player might be doing, because larger ships can shunt smaller ships and sink them. It feels like a mix of chess and Battleships, in a weird sort of way, but is a lot of fun and once you’ve cut out the ships, is quickly set up and pretty quick to play.

In the Dining Room with the Hatchet immediately screams Cluedo, but it’s far from it. It’s much more Werewolf meets a zombie horror flick. Basically, players choose a weapon to kill other players with. Each weapon has a certain way of attacking, some having a farther reach than others, but none being a certain way of winning. It also doesn’t help that killed players continue playing as ghosts. Whoever comes out of this game alive is the winner. It’s the sort of game that is more fun with more players, even though you can play it with three players.

There is a variant of Snakes & Ladders, which uses worker placement rather than dice rolling, which is really interesting. Suddenly this game is no longer about dice luck, but much more about making sure you take the right action at the right time and making sure you retrieve your workers at the best opportune moment without making your turn too inefficient.

The collection of six games also includes Splinter, a resource management, paper-cutting party game for 3 to 8 players, Guess How, a cooperative legacy game for 1 to 4 players and Another Life, an economic action selection game for 2 to 4 players.

The cards are ideal for birthdays, anniversaries, Easter, Christmas and pretty much any other event – or you can just send them to a friend you’ve not been in touch with for a long time and give them a little surprise. There is certainly a wide choice of games and I’ve already started to work out which of my friends and family I will send which game for their birthday this year.

The Dark Imp is known for creating great games that appeal to the whole family, irrespective of their age or experience with modern board games and Six Greetings Card Games is no different. It’s nice to be able to send your friends a game for a change, rather than adding to your own collection. Mind you, there is no reason why you couldn’t buy two packs and keep one for yourself. I mean… there is nothing stopping you.