The Moon was big enough for all of us, but of course, we were still competing like any other business would. We had to invest a fair amount, 3 credits, to build new modules and expand our base. We needed to make sure everything was connected up correctly and functioning as expected. If we succeeded and outdid our competitors, we would be the first to either get 10 colonists safely homed, make 5 different scientific discoveries or gain a profit of at least 20 credits from our Lunar Base by Joosep Simm, Kaido Koort, Martin Paroll and Silver Türk from Plepic Games. 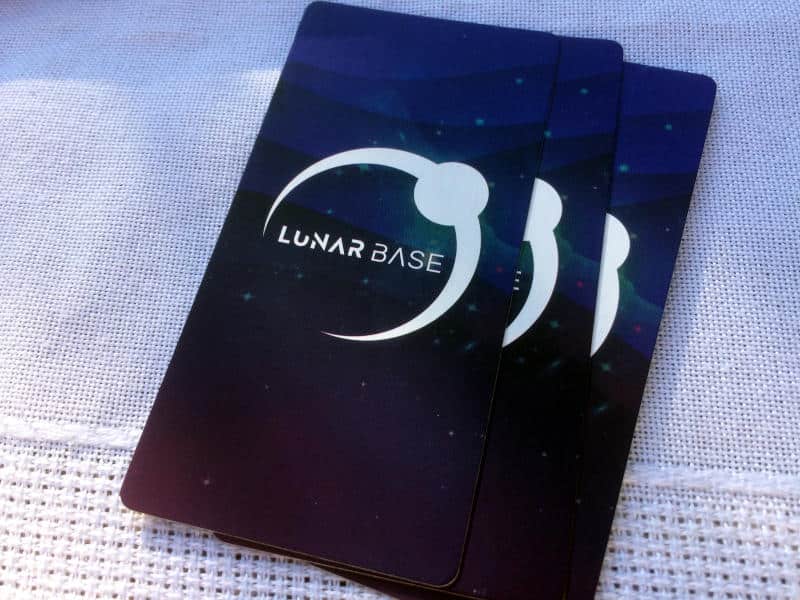 Dominoes you say. Well, that’s simplifying it quite a bit, but yes, in principle that’s what Lunar Base is. You’re playing cards and connecting the edges so they match, a bit like you would with dominoes, except that you’re not just creating a long snake of tiles, but a whole network of cards, many of which will actually lie directly side by side, butting up along one full edge. It’s more like Carcassonne than dominoes in that respect.

So, your mission is to create a base on the Moon, your Lunar Base, hence the name of the game. Everyone starts with the same outpost card, which gives you one of three actions to take on your turn. You’re mostly drawing cards from a central offer row to add to your hand, discarding cards from that offer row to gain credits or building cards by adding them to your base and paying their cost. The cost is represented by a certain amount of circles in a combination of three different colours.

You have to line up cards to match the coloured semi-circles of your existing base and as you do so, you complete circles of those colours. Those then allow you to pay for cards that you want to build. It’s a bit like Splendor in that respect. As you increase the number of coloured circles in your base, you can afford to build more expensive cards.

Also like in Splendor, if you don’t have enough coloured circles in your base, you can pay credits instead. That gives you a fair amount of flexibility, but also means that you have to try and gain credits, while you still need them, until your base is so big that you can afford pretty much any card you want.

Unlike Splendor though, being forced to line up the semi-circles on your cards with the same colour semi-circles on the other cards in your base means that you can build yourself into a corner. You really have to plan ahead and make sure that you have somewhere to attach the card you want to your base. Sometimes you have to build another card first to give you the connection points you need.

That in itself is a fun puzzle, but you also need to think about winning the game. Some cards give you extra colonists, scientific achievements or more income and you want to be the first to have 10 colonists in your base or 5 different achievements or reach 20 credits – or a combination of all three. So you do want to make sure you grab those cards that give you what you want before someone else does, even if you can’t necessarily build them straight away.

Many of the cards also offer you one-off effects as you build them, allowing you to build additional modules, steal cards from another player or otherwise give you some benefits that can have an impact on other players. Some cards also give you additional, so-called “main” actions, one of which you can carry out on your turn. One of these allows you to steal 2 credits from another player. All of this creates a large amount of direct player interaction and being able to steal 2 credits is huge.

In fact, being able to steal 2 credits is terrible, especially in a 2-player game. Everyone starts the game with 3 credits and you can usually only gain 2 credits on your turn. So if another player can steal that income from you, you can never get enough credits to build more modules, unless you’re lucky to have drawn cards that are free to build. I felt that it really breaks the game, if the stealing is available at the beginning, when players are just starting out. It’s not so much of an issue later in the game though. It’s so bad, that in a 2-player game, I suggest you remove the stealing credit cards altogether.

Generally though, Lunar Base is a really lovely little game. It comes in a small box, is fairly easy to learn, is pretty quick to set up and also very quick to play. It starts quite slow, but as you grow your base, it really speeds up and the game ends almost in the blink of an eye. It’s the sort of game that you want to play several times and is ideal for the beginning or end of a games night or similar. It plays up to 6 players, meaning you can play it while you wait for others to arrive or at the end, as people are leaving.

The components are also really high quality. The card stock is quite thick and every player gets a credit dial, which also doubles up as a small player aid, reminding people how to win. The only downside is that the dial doesn’t also show the 3 steps you take on your turn. Mind you, you can learn them quite quickly, but if they were printed on the dial, it would make getting into the game even quicker.

The rulebook is pretty exhaustive, with lots of illustrations and examples and there are the so-called “influence” cards that you leave out on your first couple of plays, but which add a really important part to the gameplay. I would suggest you never play without them, once you got used to how Lunar Base works.

So, all in all here is a really lovely little game that really works well as a filler. It gives you enough to do and think about, without being too taxing and it plays so quickly that it certainly doesn’t outstay its welcome. It’s one of the few games I own that plays up to 6 players as well, so it’s great for when you have a get together with friends or family, while not being a party game.