We were on Mars. Our colonization team had arrived. The mission of our corporation was to make this planet habitable and do so in the most economical and efficient way possible. There were many challenges ahead, but we had a great mix of engineers, researchers, technicians, managers and construction workers and everyone was fully committed to our goal. We were fully aware that this project would take us a number of generations and we were ready to begin Terraforming Mars by Stronghold Games. 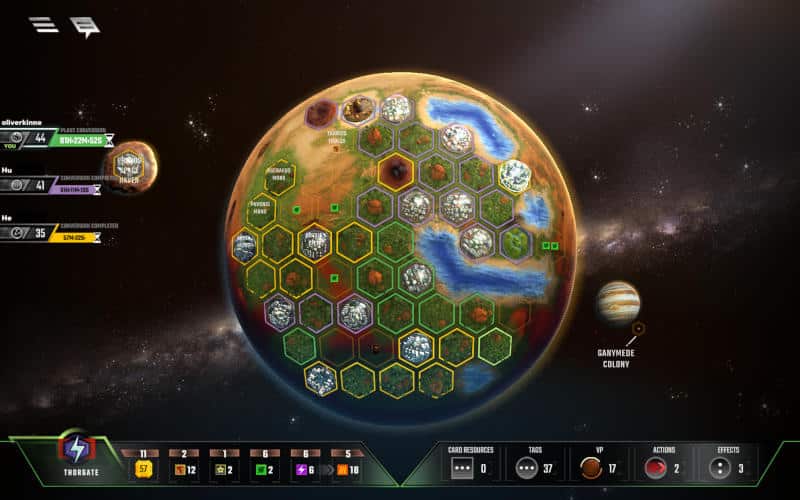 I know that this game has now entered the annals of being a classic game. So, I’m late to the party, but what a party this is.

Before we get too far into this review, I want to explain that I only ever played the Steam version of Terraforming Mars. So I’ve not had to worry about components flying across the table if someone accidentally nudges it. I also didn’t have to deal with housekeeping, such as the setup and breakdown or dealing with the production phase. I also didn’t have to consult the rulebook to ensure I placed my terrain tiles in the correct spaces or remember to take income for placing tiles next to water.

The digital version of the game is definitely beautiful to behold. It’s all very sci-fi-y in its presentation. It feels like you’re looking over the planet from your computer console inside your Mars habitat. The background music is also wonderfully atmospheric. I really want to have a copy of it to play all the time. It has a sort of calming effect, while also being quite mysterious. It’s hard to describe – you have to hear it to understand what I mean.

There are the odd blips and bugs with the Steam version, but it’s regularly updated, and anything we found a problem during our plays of Terraforming Mars had some sort of workaround – like when your hand of cards disappears, you click to display your played cards and then out again and it’s back. So, yes, it’s a bit annoying, but chances are, when you read this article, this bug will have been fixed.

What is nice in the digital version of Terraforming Mars is that you can play online with other people. You can either join someone else’s table, create your own to allow others to join you and you can even set up a private game, if you only want to play with specific people. It’s pretty straightforward, once you’ve created your online account, that is – and haven’t forgotten your password again.

Let me talk about the game itself though. Terraforming Mars is a great mix of resource management, a sort of hand management and area control. It is very much driven by the deck of cards, the “project cards”, that you can buy at the beginning of each round, called “generations” in the game. The project deck is shared, but there isn’t a shared offer row or anything. Instead, each round every player draws four cards, 10 at the beginning of the game, that they can choose from. Every project costs a fixed amount to buy, but to actually use it, you have to pay an additional amount.

Some cards you can’t play until later in the game, others you need to play early on, before the planet has been terraformed too much. So you need to decide how many cards you buy each round, weighing up an early investment for later in the game against having more cash on hand early on for other actions. That’s the hand management element I was talking about. Over-investing early can backfire, but some cards are really special and worth buying when you see them, because they will not come back again later.

It’s a tough call to make and will appeal to people who like a bit of gambling, like myself. Speaking of which, there are cards that will appeal to those players as well. One card, for example, is about finding microbes. You’re basically tasked with finding life on Mars. That is done by drawing a project card and if it has a certain symbol on it, then you get a victory point. It’s a pure gamble, and in one game I had the card right in the first round, but never found anything. So, as far as I’m concerned, there is definitely no life on Mars. Anyway, the point is, it’s nice to see a luck element like this in Terraforming Mars.

The rest of the game is then driven by what projects you decide to play on your turn. Most cards influence your resource production, allowing you to increase the production of one or two, or decreasing one to increase another. You have to balance what resources you want to produce more of to align with your strategy.

The game will also influence what resources you want more of, because you’re trying to increase the planet’s temperature and oxygen levels and create a certain number of bodies of water. Once they have reached their maximum, you won’t benefit in the same way for increasing them and to increase them, you need specific resources, meaning you may want to reduce the production of those resources at this stage in favour of others.

So it’s not just about building an engine that gets better and better all the time, but an engine that adapts to the state of the planet – and the main way of influencing that engine is through the project cards. There are other options, but these are quite costly, but sometimes they’re the only way for you to get ahead and catch up with the other players.

There is also a fair bit of player interaction in Terraforming Mars. Many of the project cards allow you to take resources from other players, but because there are so many of them, it doesn’t feel quite as bad to use them. After all, chances are that you taking from one player will prompt them to take things from you. I think that’s why this game is better with at least three players, otherwise it will feel a bit personal.

There is a problem with being so heavily reliant on your project cards though. If the cards just aren’t going your way, you just won’t be able to do much. You’ve almost lost from the start. It has happened to me in one game and one of my friends in another. It’s frustrating, because there is nothing you can do about it. It’s just bad luck. However, I would expect games to give you more options, so that you can change your strategy based on the cards. Unfortunately, in Terraforming Mars, it does sometimes feel like you have no control and the cards are just too unpredictable.

What is nice though, is that you can control when the game ends by influencing how quickly the oxygen levels and temperature increase and how many bodies of water are placed. You can sit on your cards that help with that, to slow down the process and give you more time to catch up with other players, or you can try and push for a quick end to the game when you’re in the lead.

It reminds me of Scythe in that way. It’s nice that the game doesn’t just end after a certain number of rounds. If you need more time, chances are you can buy yourself some – and if you time it just right, you can scrape into the lead and finish the game at the same moment. It’s a great tactical option that makes the game really exciting towards the end.

Overall, Terraforming Mars is really atmospheric and you do feel like you’re actually terraforming the planet. Plonking down forests or oceans or cities is just very satisfying. The project cards also add to this and allow you to create a unique story of how the planet went from a desert to a livable habitat. It’s really imaginative and the whole game immerses you in the setting and transports you to another planet.

So if you like a bit of area control, player interaction and planet building, then Terraforming Mars is a must buy – at least in its digital form.