Things had gone missing – food, to be precise. Someone was taking bits of food here and there and stashing it away somewhere, hiding it from the eyes of everyone, especially the keepers. It quickly became clear that it wasn’t any of the visitors to the zoo, but one of the animals – or a group of animals. The meerkats were acting suspiciously as well and were clearly involved. However, as security camera footage was closely monitored over the coming days, it came as a shock that the zoo had a group of Pilfering Pandas by Wren Games. 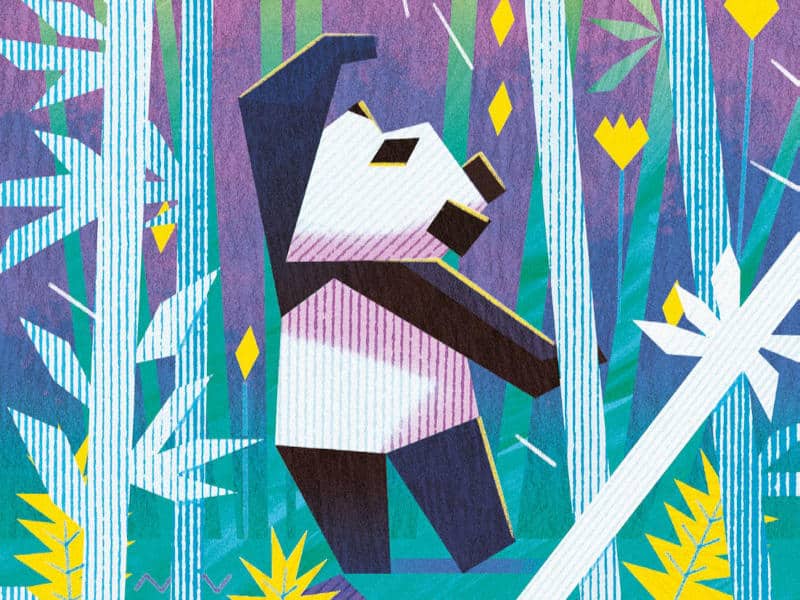 Here is the latest game from Wren Games, who have landed one hit after another, first with the addictive two-player co-op game Assembly, and then with the deeply thematic solo game Sensor Ghosts. So the expectations are high for Pilfering Pandas and the pressure is on.

The game is off to a great start, because it can be played solo, co-operatively as well as competitively. That’s something that’s very hard to achieve, especially so because this time Wren Games have gone for a set collection game. So, yes, here is another game based around playing cards, but set collection feels like a relatively big departure for the designer and self-publisher – and Pilfering Pandas takes set collection to another level.

But let me start at the beginning. In the game, you’re a group of pandas who are pilfering food from other animals as well as visitors to the zoo and are giving it to the meerkats who convert it into supplies, or tools, that you need to escape. I was immediately reminded of the penguins from Madagascar, who were always trying to be “cute and cuddly”, so that they wouldn’t draw any attention to themselves as they were executing their escape plan.

It seems, the pandas in Pilfering Pandas are taking the same approach. However, I must say, the theme in the game is really just a skin, than something integral to gameplay. Saying that, the illustrations by Gianfranco Giordano are absolutely gorgeous and perfectly pitched for the game. They are a little bit stylized, which lends itself to a deck of cards, while still retaining the cute and cuddly factor, making it hard to focus on playing your cards, because you just want to keep looking at the lovely animals on the cards.

However, at the end of the day, on your turn you draw one or more cards, which is where the “pilfering” comes in. If you take more than one card, you are starting to attract the attention of the keepers, and depending on whether you play solo, co-operatively or competitively, you either get closer to being discovered and losing the game or you can’t pilfer multiple cards again for a while.

You choose the cards in such a way as to give you either a set of cards with the same number or a sequence of numbers of the same suit. If you have at least three cards with the same number of three cards of the same suit in sequence, you can then play them either to a shared row or to your own, depending on the mode you play in. That represents giving your pilfered food to the meerkats who give you supplies in return.

So far, that’s just standard set collection, but Pilfering Pandas adds a twist. The very first set you play out to a row can be anything, but if you add more sets, your new set will have to either match the number or the suit of the existing set – and you can add a new set either to the left or the right to the already played cards. You can also extend an existing set, for which you will only need one card.

I think this twist makes the game very interesting and much trickier than other set collection games you may have previously played – and it doesn’t end there.

It’s trickier than you think, because as you play sets, you don’t automatically refill your hand – and you usually only draw one card at the beginning of your turn and you also have to play one card at the end of your turn. So to get more cards into your hand, you have to pilfer multiple cards from the offer row, but then you attract the attention of the zoo keepers, which means you can’t do it again for a few turns.

It becomes a real puzzle, but when you pull it off, it feels amazing. In fact, it’s what makes the competitive play really shine. Timing is important. You don’t want to end the game too early, if you’re not in the lead, but you also don’t want to end up with too few cards in your hand, or you’ll find it hard to play more sets. It’s a real balancing act.

The solo and co-operative mode turn things around slightly. There is still a central offer row, from which you can draw one or more cards, but there are now several meerkat rows that you can play sets to. Your aim is to reach a certain score, before you have attracted too much attention from the zoo keepers, which start to catch up with you whenever you take more than one card. You still have to have a certain number of cards in the meerkat rows, making timing really important again.

You also need to switch up your thinking, because now you need to play cards into the offer row to help the other players make sets, while in competitive mode you really don’t want to play any cards that your opponents might need. So the solo and co-operative modes are really different from competitive.

Yet, for me, Pilfering Pandas really shines in competitive mode. Maybe I’m not a true co-operative player at heart, but it just feels like the game really challenges you as you play against other human players. Timing becomes a lot more important and holding onto the right cards is often vital.

That is not to say that the solo and co-operative modes don’t work. In fact, when I play Pilfering Pandas with my wife, we always play co-operatively. It’s the mode that suits best when we play together, and I think for a lot of people it will be the same.

It’s also going to be attractive to solo players. I can’t really comment too much on this mode, because I rarely play solo games, but when I tried it, it felt really close and you do have to work hard to win the game and help your pandas escape the zoo. The keepers are always close on your heels and it will take a few attempts before you beat the game, and then you can keep playing and try to beat your score.

So, if you want a lovely set collection game, with wonderful illustrations and a lot of replayability, then Pilfering Pandas is definitely for you.