After the Kickstarter campaign for Assembly by Wren Games finished successfully back in June, the game is now close to being sent out to backers. So it is time to have a closer look at this fun, co-operative card game. The game can be played solo, which is also possible using an app, or in a two player co-operative setup. The aim is to manoeuvre a set of tokens along a randomly configured circle of locations into their correct slots by playing cards that allow you to rotate, swap and lock these tokens in place. To do this efficiently you need to play cards that your team mate can match with a card in their hand – but the problem is that you don’t know what cards they have. 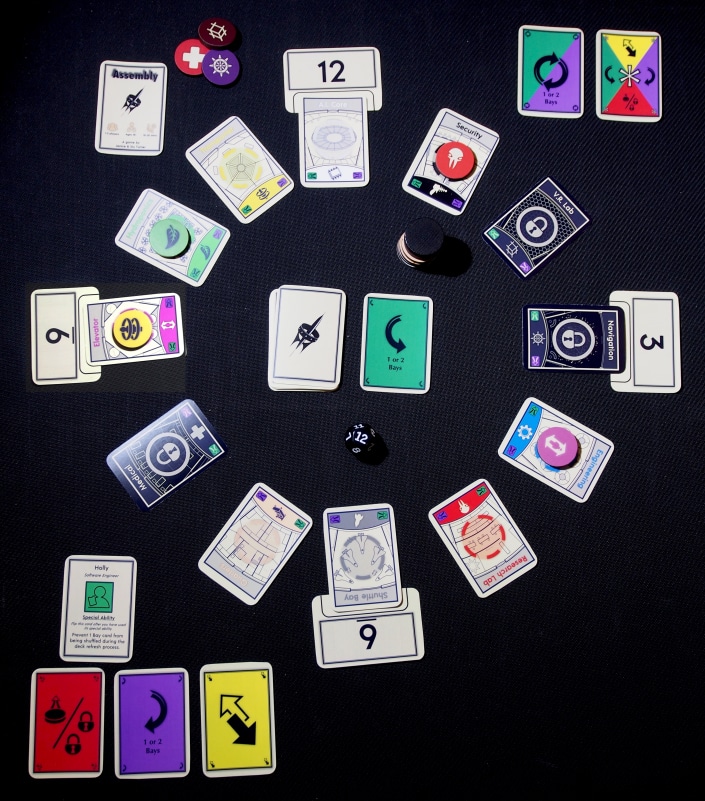 At first sight, Assembly seems really quite simple, but you very quickly realize how difficult it is to get every token into their corresponding location, because every time you play a rotate card, you have to rotate all tokens, unless they have been previously locked down – and you can only lock down tokens that are in their correct location – and you can only ever lock down a maximum of two tokens – and you only have so many cards to draw from the shared deck – and you can only reshuffle your discard pile twice, which creates a time limit – and… well, I think you can see that there are quite a few conditions that create a very tricky puzzle.

To top it all off, every time you play a card, your team mate has to discard a card if they don’t have a matching card in their hand. So while you really want to play a swap card this time, because it would get two tokens into their correct locations, you may risk cycling through the deck quicker than you want. Even if your team mate does have the right card and you are able to move two tokens into their correct locations, it is now up to your team mate to play a lock card to acutally lock them into place – and for you to also have a lock card, so that you are not forced to discard one of your precious cards.

At any point you can discard your whole hand as a joker, allowing you to choose any of the possible five actions: rotate all tokens clockwise, rotate all tokens anti-clockwise, swap two tokens, randomly deploy a new token, and lock down up to two tokens if they are in the right place. However, your hand limit is three cards, so the question is whether it is worth discarding your whole hand just to be able to carry out an action of your choice, while at the same time burning through your deck like there is no tomorrow.

The first few moves are quite easy, but very quickly it becomes harder, as more tokens enter the circle. Every card you play increases the pressure of completing the task of locking all tokens in their correct locations. Not only that, once your draw pile is empty and you are due to draw back up to your hand limit at the end of your turn, you shuffle the discard pile into a new draw deck, but you also have to shuffle the locations that haven’t been locked down yet, destroying all the hard work of getting tokens into place.

The game makes you feel really amazing when you are able to play one card and manoeuvre several tokens into their correct slots, while your team mate follows through with a lock down, followed by another lock card played by yourself. Suddenly you have four of the twelve tokens in the right place in three moves. You feel like jumping for joy, but you know that there is much more work to be done.

There is a really interesting pressure curve in the game. It starts quite simple, but within a few moves the pressure really ramps up. Yet, the more tokens you lock down, the easier it is to get the remaining ones into place, so the pressure goes down again. The thing is, the pressure ramps right back up again as you reach the end of the game when you have only a handful of moves left to get the last one or two tokens into place and locked down.

There is a lot of replayability in the game, because the circle of locations is dealt randomly every time, and every time you deploy a new token, it is also randomly chosen and placed. If you find the game a little too difficult, you give yourself and your team mate a special, one time ability to help you along – or if it feels too easy, you can add the mini-expansion that creates an extra level of complications.

Assembly is basically a deck of cards with a handful of tokens and a dice, so you can take it with you virtually anywhere, which I love. I really enjoyed playing it with my wife, and I loved playing it in solo mode on the app. I do prefer the two-player co-operative version though, because it feels so satisfying when you both can play the right cards to win the game.