Imagine the asteroid field scene from Star Wars: The Empire Strikes Back, where our heroes risk their lives to try to get away by entering an asteroid field, then add the AI HAL from 2001: A Space Odyssey, which has gone mad and taken over the spaceship, forcing the crew to try and outwit it – and you basically end up with the gameplay of Sensor Ghosts, the new game by Wren Games, due to launch on Kickstarter on 28 May. 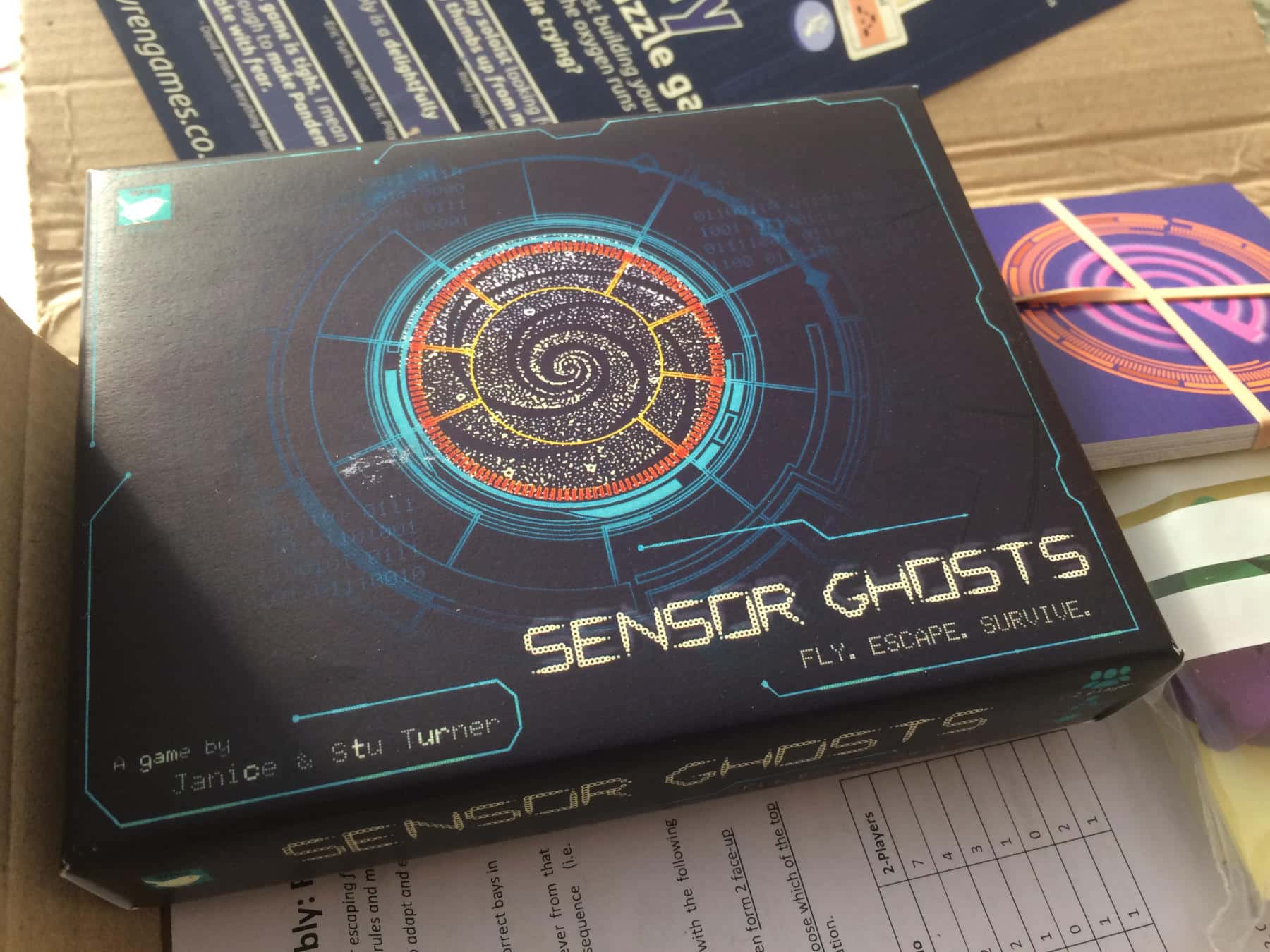 The game is described as “a moving maze sci-fi puzzle game where orientation and careful planning will determine if you survive or not.” In reality, you and your crewmate fight for your lives after barely escaping the Assembly space station, whose AI had gone mad and you had to outwit it to get out alive. Now you’re on your spaceship, headed for Earth, just to find that the crazy AI has made it on board and is messing with the ship’s sensors. Not only that, but you have just entered the asteroid belt between Mars and Jupiter when you discover your ship’s radar image has little to do with what’s actually ahead of you.

I won’t explain the full game here, but it basically consists of a 5 by 7 grid of tiles showing either an empty space, which is safe, an anomaly, which boosts your movement, a meteor, which causes damage, or a block tile or a gap in the grid, neither of which you can enter. You have a limited deck of command cards to play, that allow you to steer the ship, peek at the route ahead, run deep scans or charge your shields, and get from one corner of the grid to the other, where Earth is, without bumping into anything or falling off the edge. After every turn, the grid row ahead of you shifts along one tile and a couple of tiles flip over, potentially revealing meteors or blocks, or maybe empty spaces. There are also five wooden pieces strewn across the grid which represent virus samples and dead rock. It is up to you and your crewmate, if you play two player, or you alone, if you play solo, to remember what’s what, making Sensor Ghosts a mix of Memory and Magic Maze, where instead of picking up treasure, you try and pick up virus samples, discarding dead rock if you find it.

So, let’s get back to the plot. HAL is listening to you and your crewmate’s conversations, like a mad Alexa that hasn’t been trained to your voice and decides to order 50 rolls of toilet paper, when you only wanted 15. You are forced to say as little as possible, or say nothing at all, while trying to coordinate which commands to issue when and in what order, so that you can carefully steer your spaceship through the always shifting asteroid field. You manically try and power up your shields, but that is a slow process – imagine the scene where Han desperately tries to fix the hyperdrive. So in the meantime, you run deep scans of the area around you, in the hope that you can plan a safe route past the dangerous rocks that threaten to blow your ship to smithereens at any moment.

Along your way, you discover weird gravity wells, which catapult your ship an extra space forward. That can be a blessing, if you land on a safe space, or a curse, if you hit an asteroid, which will hopefully be absorbed by your shields – or it’s the death of you if you fall off the edge of space, hit a dwarf planet or fall into a black hole. Just like a jump to lightspeed, you have to get your calculations spot on or you end up embedded in a planet or star and die immediately.
As you approach Earth and make contact, you are told that you are banned from landing until you collect a virus sample, which will be used to create an antidote to the deadly plague that has befallen you. So now you can’t just head for home, you need to systematically search the asteroid field and pick up rock samples, in the hope that one of them has a viable virus culture on it that you can take with you. Just make sure you don’t get swallowed by an exogorth as you land on a space rock to get your sample, or it’s game over. Actually, there is no exogorth in Sensor Ghosts, but there might as well be, given how treacherous your journey back to Earth is.

Sensor Ghosts is set after Assembly, and both games have similar mechanisms, such as players having to coordinate actions without being able to communicate, or the flipping over and shifting of tiles. However, Sensor Ghosts has a completely different feel about it and a completely different gameplay. It gives you a real sense of flying through an asteroid field almost blind, trying your hardest to scan ahead and remember what part of the route is safe, while everything is shifting and changing all the time and the ship’s AI conspiring to kill you. It seems hopeless, but then you suddenly get everything lined up perfectly and you make your escape back to Earth.

I can really recommend this game if you are looking for a dedicated two player game. I haven’t yet tried the solo mode, but if Assembly is anything to go by, then Sensor Ghosts’ solo mode is going to be excellent. Check it out on Kickstarter when it launches on 28 May. It’s definitely worth have a closer look: https://ks.wrengames.co.uk/