My two best friends were here and we decided to go out into the yard and see who else was about. Chef and Prince were hanging around the street at the back of the house, while Smoke and Doc were playing tag. Blitz and Sweet Pea were up the ash tree in the neighbour’s garden. It was a motley crew, but we usually got up to some fun. Suddenly I had an idea. It would be cool if we had a little competition with all the other kids in the neighbourhood and see who could build the biggest and strongest Fort by Leder Games. 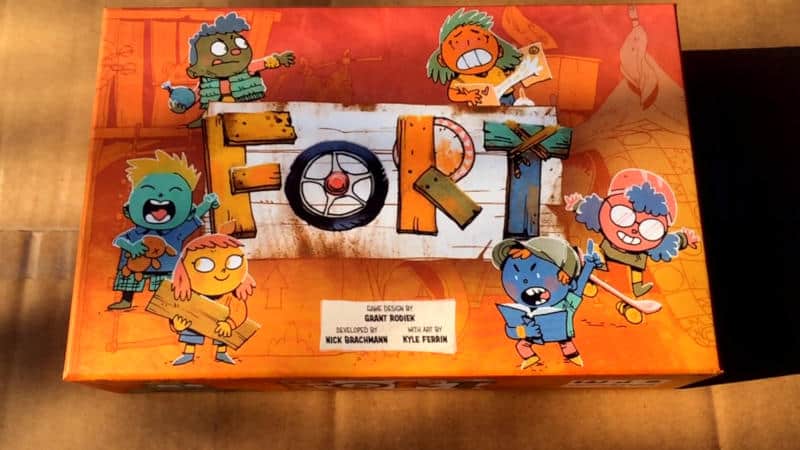 Yes, that’s basically what the game is about. However, I think the theme is pretty loose and Fort really is a great deck building game, but with a twist. So everyone starts with two best friend cards, that are the same for everyone, except their suit – but we get to that later. Everyone also gets 8 random friend cards to make their starting deck of 10 cards, which is shuffled, after which you draw 5 cards into your hand. So far, nothing much new.

However, when it comes to playing cards, things are a bit different. You can only play one card and then do the action or actions it offers. Some cards allow you to “improve” them, which basically means you can play additional cards not for their action, but their suit. For each matching suit, one or both of the originally played card’s actions can be carried out multiple time, basically multiplying the benefit by the number of matching cards you played. That is quite neat in itself, so having lots of cards of the same suit can be beneficial, but that’s not the only reason why you want to play as many cards as possible – but we’ll get to that in a moment.

The next difference is, that, once you have carried out one or both actions of the card you played, all the other players can now “follow” the public action of that card, but to do so they have to discard a card from their hand with a matching suit, and they can’t “improve” the action by discarding multiple cards. They get to do the action only once – at the most.

So the first decision you have to make when you play a card is if you are happy for others to follow the public action on it. That can be tough, because your main aim is to make your fort better, even though that’s not the only way of scoring points. However, there are more decisions that make this game so interesting and take the concept of deck building to another level.

Once everyone has decided to follow the public action, or not, you now get the opportunity to “recruit” a card, basically taking a face-up card from an offer-row, the so-called “park” or the top face-down card from the “park” deck – or you can take a card from another player’s “yard”. The “yard” is basically where all the kids hang out that you didn’t play with on your turn, which means all the cards that you still have in your hand and haven’t played as the main card or as cards to improve an action.

So when you decide which card to play and whether to improve the actions of the card, you do have to think about what cards you won’t be playing this turn, because they will end up in your yard and other players can freely take them off you. After all, if you didn’t play with those kids, they are open to offers of playing with someone else.

That’s a really neat mechanism, making the decision about which card to play from your hand almost excruciating. You usually have one card that you really want to play, because it really benefits you, but then all these other cards in your hand are pretty good too or might actually be ideal for other players and you don’t want to lose them. At the same time you’re thinking whether the public action of the card you want to play would benefit others.

Playing cards is probably the biggest part and the biggest decision in Fort. If you can get that right, the rest is relatively easy. Sure, you also have to think about which card to recruit to improve your deck, and there are cards in the game that allow you to trash cards, thereby thinning your deck to make it more efficient.

Yet, it’s the idea of the yard that really adds spice to what would otherwise be a relatively standard deck building game. It seems like a little thing, but it has huge implications and really takes this game to another level. At the same time though, the fact that you can take cards from other player’s yards doesn’t actually feel terribly mean. It is an element of player interaction for sure, but at the same time, there is always the chance that the same card will go back to the original player eventually, if you get it into your hand at the wrong time and have to offer it to your own yard on your turn.

It simulates the fact that friends come and go and one day play with you and the next day with someone else. Apart from your best friends, who will always stay with you, the rest of your friendship group is fluid and even though some friends will be with you for most of the game, others will come and go.

What’s also really good about Fort is that it plays really well at 2 players too. Often, deck building games can feel a bit weird at two players and are usually a lot more fun at higher player counts. Of course, Fort also benefits from more players, but it’s still great fun if there are only 2 of you.

It’s also really easy to learn, making it a great game to introduce to people. You can almost learn it as you play, as some things, like made-up rules or perks, play a part in the game later on. If you know deck building games, then Fort will be even easier to learn, of course. It will take a little while to learn how the different suits work and how to get victory points in the game, but it doesn’t take long. After a couple of games, you’ll have a good idea and the game really flows. It plays very quickly as well, so you can easily play it a couple of times in an evening.

The artwork by Kyle Ferrin is also wonderful, like all of his illustrations. His art style works perfectly with it and really adds to the playfulness of Fort. If you want to try out deck building, or if you want to take deck building to another level, then Fort is definitely worth taking a closer look.