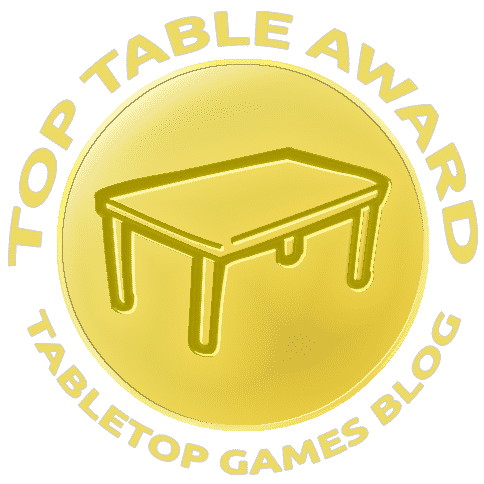 As is customary at the end of a calendar year, it’s time for my top 5 board games of this, rather odd, year and for me to announce the winner of the Top Table Award 2020.

Let me say that this year, I happily allowed games into the top 5 list that were published before 2020, as long as these games were new to me this year.

There is a clear winner for me, not just based on the number of plays, the amount of enjoyment the game brought and the nostalgia factor that the game has for me, but because this game took a well-established genre and took it to the next step, making it more accessible to a wider range of people.

However, let me not spoil it for you, but start at number 5 and work my way to the top slot.

No, it’s not a civilization builder in the traditional sense, but thematically you do see your people live through generations and discover new technologies, explore new parts of the world and spread across the land. However, those discoveries can be quite random, allowing for your civilization to still have not developed a written language, but already use electricity. So don’t go into Tapestry expecting to recreate an alternative history of a fictional race that makes logical sense, but instead just enjoy the journey and accept that winning can be down, at least in some part, to the luck of the draw or the luck of your dice rolls.

As you will see in my review, I do really enjoy the game and have played it now many times and it’s really only once you have played it a dozen or so times that it clicks a bit more and that imbalances of some of the factions become more obvious, even though I still don’t think all of them are as over- or underpowered as some might say.

Remakes of classic films aren’t always better than the original. In fact, they’re often worse. Board game adaptions of great IPs have also often failed to deliver, focussing on visual appeal and setting rather than gameplay. However, Jaws has achieved where others have failed – and then some. As my review shows, here is a game that’s partly co-operative, partly competitive, as one player takes on the role of the man-eating great white shark, while the others take on the roles of the human team trying to put an end to the animal’s killing-frenzy. Mixing hidden movement of the shark with open discussion of the human characters and intentionally dividing the game into two acts, create an intense game where nobody quite knows who is having the upper hand.

A great story as the backdrop for a board game is always a good start. Add to that intrigue, asymmetrical player powers, alliances and betrayal, area control, combat and a lot more, then you end up with an amazing game that you want to play again and again, but also want to savour and enjoy – like a fine wine, even though I’m not a huge fan of wine. Dune does it all amazingly well. My review will tell you more, but if you know the books or have seen the film, or if you’re eagerly awaiting the remake of the original film, and you like board games with direct player interaction, a large map to keep an eye on and lots of surprises and constantly changing alliances, just like the sand dunes on the planet Arrakis, then this game will be for you.

#2 – Back to the Future: Dice Through Time

No, the game doesn’t do anything to prevent one player from taking over everything, and yes, you do have to have spare brain capacity to think through the best way to use the dice results everyone has got to allow you to achieve the optimum result as a team, but it’s one of those games where, at first, you can’t believe that it’s ever possible to win. Then you play it a few more times, you learn new tricks and you get closer and closer to winning, but never quite get there, until you finally do and it feels so great – and if you’re a Back to the Future fan, then it feels even more amazing.

If you have read my review of the game, you will know how much I love this game and why. For one, I grew up with trick-taking games, so seeing this ancient genre of games being reinvigorated by a new contender, which turns trick-taking into a fully co-operative idea, is amazing. It gets even better when the game makes trick-taking much more accessible to people, so it’s easier to teach and easier to learn. Here is a game that ends up being played again and again and again, several times an evening, every evening a week, for several weeks and you just can’t stop. The pinnacle of any game, for me at least, is if it’s something my wife and I equally enjoy playing – and this one is all of that.

So Kosmos has done an amazing job with The Crew: The Quest for Planet Nine and very much deserves to win the Top Table Award 2020. Congratulations!