“So, let me illustrate. Imagine a line that represents time and at one point is 1985, to the left of it the past and to the right of it the future. If we travel back in time and make some small changes, the timeline skews off at an angle, creating an alternate 1985 – or rather, it’s an alternate to you, Einstein and me, but a complete reality for everyone else. It turns out that Biff took the Sports Almanac into the past and thereby created this new timeline. It’s now up to us to find a new way to get Back to the Future: Dice Through Time by Ravensburger.” 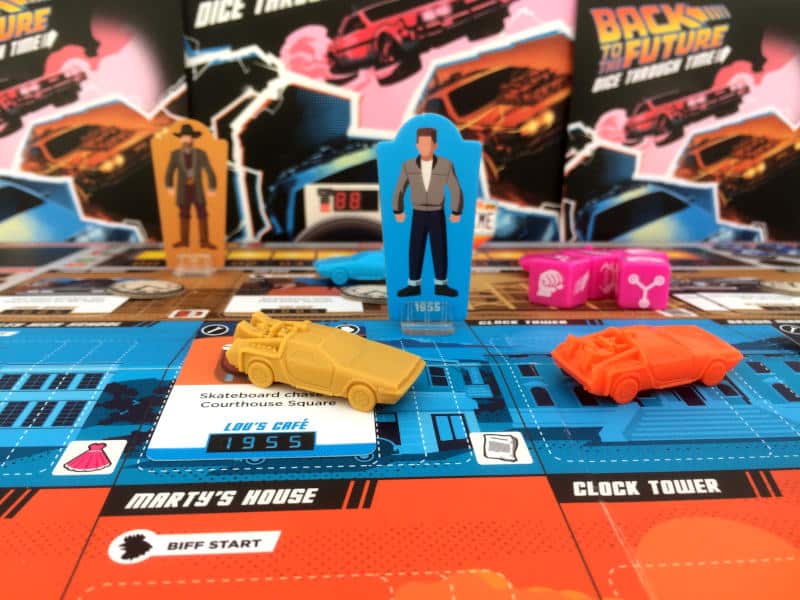 That explanation, that I loosely based on the explanation by Doc Brown in Back to the Future II, explains why up to four players can travel through time all at the same time using their own DeLorean each. Four independent timelines have been created by the various evil doings of Biff when he stole the time machine and travelled to the past in the film.

However, you can also play the game with two or three players, of course. Just imagine that some of the temporal paradoxes somehow resolved themselves in such a way that it’s impossible to tell whether the extraneous alternate time streams are actually different or not.

Time streams, temporal paradoxes, multiverses and alternate futures are all very complicated, so let’s not worry about them too much, but focus on the much more important, and seemingly much easier, action of time travel itself. Your and your other selves’ job, after all, you’re all Martys or Doc Browns, is to travel through time and “restore temporal balance, […] by ensuring certain events occur and restoring items to their proper place and time,” as the letter by Dr. E. Brown Enterprises tells you on the back of the game board.

Yes, this is a co-operative game where all of you can communicate with each other using some not yet understood temporal device, but none of you shall ever meet in the same place and time, or you “could destroy the entire universe,” as that same letter helpfully explains.

As I said, don’t think too much about the science behind all this, but give yourself over to the wonderful world of the Back to the Future franchise – and wonderful the game truly is. Everyone gets a real DeLorean – well, a real scale model, which is highly detailed and comes in the four possible player colours. There is nothing stopping you making it lift into the air and fly into the future – or the past, depending on where the next temporal event is that needs fixing. I just wish you could actually swivel the tires, like the “real” car does in the second film.

Anyway, so you’re all working together going to one of the five different locations in one of the four different timelines to fix temporal events, which you draw from a shuffled pile of cards at the beginning of each round, by rolling dice and hoping you get the right combination of symbols you need to fix things, pick up items and return them to their proper place and time.

I know, I’ve made this sound very boring, but it certainly isn’t. Yes, there is a lot of luck involved in this game and when you play for the first couple of times, you do get the feeling it’s impossible to win this game – because if you run out of time, you lose – and you feel like you all need an extra dice to have any chance of dealing with the ever-increasing amount of paradoxes.

However, there are a lot of ways to deal with the luck you’re dealt. The randomness can definitely be handled and shaped, and once you’ve played the game a couple more times, you have worked out what you need to do and how you need to go about things. You will also start to harness the power of rippling dice through time, so that the next player can deal with events that maybe you couldn’t have dealt with on your own.

Suddenly the game switches from something completely random and unsolvable to a tense hour of working together to find the best moves for everyone’s DeLorean and to decide who should biff Biff when and where to. You, as a team, develop strategies and tactics to finally beat the game.

Of course, all games of this ilk beat you more often than you beat them – but the odds do get better over time and you do feel more and more like you control your own luck. If it feels like it’s becoming too easy, you can, of course, make the game harder by choosing a higher difficulty level as shown in the rulebook.

If you like co-operative games, then you will like Back to the Future: Dice Through Time just as much. My wife is a testament to this. It’s one of only a handful of games that she kept asking me to play, which means a lot.

If you love the Back to the Future films, then you will love this game. I’m a great fan of all three films, having them all on DVD (I know, I’m showing my age), and the little DeLoreans are just wonderful. All of the components in the game are of great quality, as you can see in my unboxing video, so you should have a lot of fun.

Anyway, I have got to go. I’m almost outatime. Time for me to do a bit of time travelling…