It was time to find the next victim. The beaches were full of swimmers, so it was going to be easy pickings. Yet, the sea around the island was patrolled by the Orca, a 42-foot former lobster boat, that was launching barrels into the sea to flush me out. A little speedboat was also making its rounds and using its fish finder to see if it could spot me. So far, I hadn’t been found and already five people had lost their lives to my merciless attacks. I just needed four more victims to end up in my Jaws by Ravensburger. 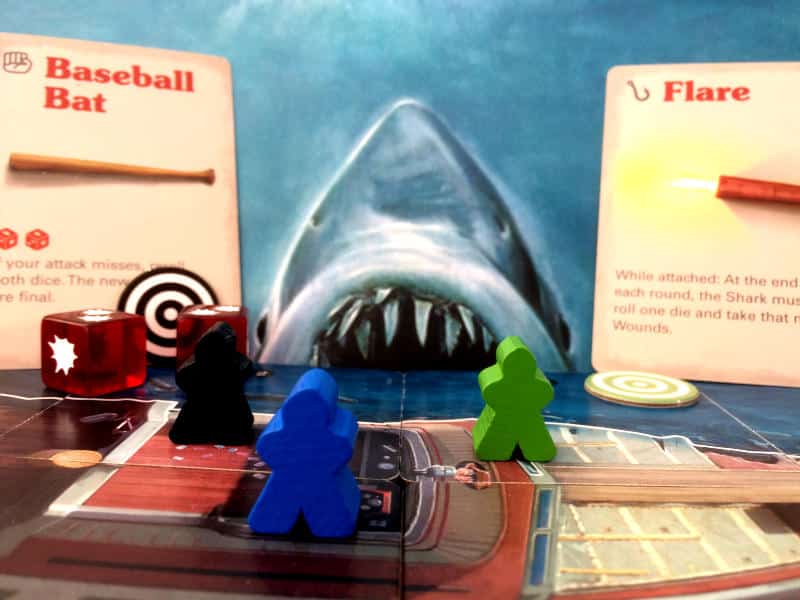 If you know the film, you’ll recognise the artwork, the characters and feel right at home when playing the game. Jaws is based on the famous horror film from 1975 and follows it pretty closely. In fact, the game is a really good adaption and not just a thin veneer on top of boring mechanisms.

It’s the first one-versus-many games I’ve played, making it a wonderful mix of co-operative and competitive play. So if one person in your games group doesn’t like co-operative games, they can take on the role of the shark who is pitted against the crew, whose roles can be played by the rest of you. It’s perfect.

Yes, the film is from a certain era where strong men pit their strength against a killer beast in a battle until death. It’s all very stereotypically macho and because the game replicates the film, the only characters in the game are the three men, Quint, Brody and Hooper, as well as the shark.

Yet, you never see the men’s faces nor do you hear anything about who they are, so when playing the game it never felt as if you were playing as a man. All you were doing was trying to use the actions available to you to try and find the shark and save the swimmers. You were playing as yourself, and speaking to my wife about it, she felt the same.

So for once, I think it’s a good thing that a game using a specific, well-known IP doesn’t represent the characters in any detail. It allows you to put yourself into the game rather than try and act out a role.

The other thing that I found interesting is the role of the shark. I’ve not yet played it myself, but the shark player has told me that it always feels like the crew are about to discover where you are and catch you, but having always played as one of the crew, I never felt that we ever knew exactly where the shark was. We often came close, but rarely got the shark before it ate its ninth swimmer, which marks the end of act 1.

I think the game is really well balanced in that respect and both parties, the shark and the crew, have an equal amount of opportunities to gain the advantage, even though it’s one against three. I’m sure if you were watching the shark player closely, you could probably tell what they were doing, but if you take the game in the right spirit, the shark is very hard to find.

It’s this hidden movement mechanism that I really like about the game. It’s what makes the first act so exciting for both sides, as nobody is sure what the other side might do. As the crew, you try and get some clues as to where the shark might be, but you can never narrow it down to just one space, and unlike in the film, in the game the shark player can cleverly respond to the crew’s actions and evade their attempts to catch it. Yet, as the shark you will end up in some close shaves that only your special ability cards can get you out of. You’re constantly skirting with danger, which keeps up the tension.

In act 2, you’re on the boat and depending on how well the shark did in act 1, you get a certain amount of gear to help you kill the shark, while the shark gets a number of cards to help it destroy the boat or kill the crew – or both. I like that the efforts from the first act are carried over into the second half of the game. It really pays off if you do well at the beginning of the game.

The only thing that might be a problem in the second act is that it becomes a lot more about luck. Yet, I never felt it was a problem. Deciding which one of the possible three locations the shark will attack is usually relatively straightforward, but of course the shark can bluff and double-bluff. A location that might be really advantageous for the shark may exactly not be the one that it attacks at for example, because it’s just too obvious – but then maybe because everyone thinks it’s too obvious, that’s where it will attack after all.

So even though I wouldn’t call Jaws a bluffing game as such, it certainly has a fair bit of bluffing in it – and not just in act 2. Even in the first half of the game, the shark may intentionally stay near the crew, because that’s clearly the worst place it could be, so the crew will never assume that’s where it is.

Then there are the dice rolls in act 2. Not many people are fans of dice rolls, but I really don’t think they’re problematic in Jaws. There is never a situation where the dice decide the outcome of the game, except, of course, the very last roll. However, until then dice rolls do add an element of luck, which increases the tension, but you never feel that you simply lost the game on the roll of a dice.

For the crew, it’s much more about deciding which gear to use when, and for the shark, which card to play. Even the worst (or the best) dice roll has less impact than choosing the wrong card at the wrong time.

What’s really nice in act 2, is that you can actually see the boat being destroyed by the shark. You flip over, then remove one of the eight tiles that represent the Orca. It’s a wonderful touch that really creates a sense of danger and it’s another way for the shark to play strategically, trying to favour attacks on the middle of the boat, which will either force the crew into the water or separate them, making it harder to attack you.

It’s another reason why the luck of the dice rolls doesn’t feel like a problem. Your choices and decisions are much more important.

So if you’re looking for a co-operative game that you can play with someone who prefers competitive games, where hidden movement dominates and creates suspense and which is based on a very famous horror film, then Jaws is definitely for you.