Living in the country is nice, but getting to work requires a car. In fact, getting anywhere needs a car: shopping, going out (unless it’s to the local at the edge of the village), seeing friends (because even though you pretend to, you don’t actually get on with your neighbours) and doing the school run. On the other hand, because it’s so hard to get around, we don’t actually spend as much on things, which is good. However, there is a lot we need to do if we want to make sure our household leaves only a Tiny Footprint by Gaard Games. 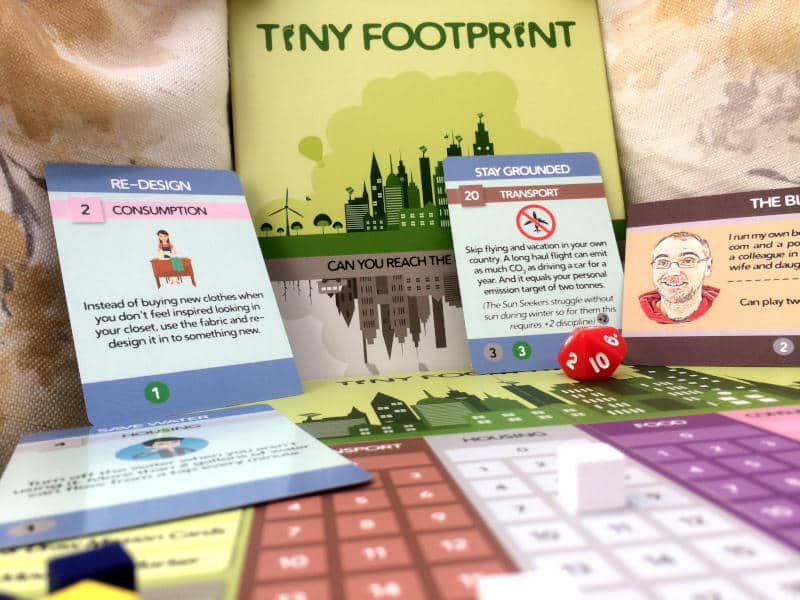 Yes, there seem to have been a couple of carbon-conscious games on Kickstarter not too long ago. There was Carbon City Zero, which I backed and reviewed, as well as Tipping Point, which is yet to fulfil and probably a few others that I missed. So there seems to be a market for games dealing with climate change and Tiny Footprint is tapping into this.

Everyone works together as one household and tries to reduce the carbon footprint that’s represented by four types of emission tracks: transport, housing, food and consumption. You get five rounds in which to lower all four tracks to zero emissions or you lose the game. During a round, everyone takes turns in clockwise order placing one or two of their personal or the shared pool of cubes to take an action and when nobody has any cubes left, the round ends.

Everyone also gets a hand of cards that represent one type of the three kinds of resources or that can be used as an action. There are also mission cards that require a certain combination of the resources to allow you to lower the emission rate of one track. Everyone can only complete their own missions and they can only use their own resources.

So far there isn’t really anything new. You have multi-use cards that force you to decide if you want to use them for their action or as a resource. The thing is, the decision is rarely a difficult one. For example, I can use one action cube to play a card for its action that then gives me more action cubes or I can use the action cube to fulfil a mission that uses the card as a resource, meaning I don’t get extra action cubes. Well, the obvious choice is that you play it for its action, so you get more cubes.

Other cards all you to draw more cards, which again seems like an obvious choice, especially because drawing a single card costs one action cube and to draw three cards costs two cubes. So playing one cube to use a card’s action to get three cards seems like a great deal.

That in itself might not be so bad, but unfortunately, it doesn’t end there. In games like Pandemic, you really have to work together. One of you might be able to find a cure, while the rest of you mop up infections or build research centres. Everyone has different tasks and these change from turn to turn.

However, in Tiny Footprint everyone ends up playing multiplayer solitaire. You draw your missions, decide which ones are most profitable in terms of converting resource cards into emission reductions and off you go. The game doesn’t offer the opportunity for different players to focus on different emission tracks, because which tracks you can reduce depends on the mission cards you draw and these come from a single shuffled deck. So if everyone has cards for the food track, then there is very little you can do about it.

The upshot of this multiplayer solitaire approach is that the solo game feels exactly the same as the two-player game or playing Tiny Footprint with more players. Not many games achieve that.

The thing is, the game is trying to encourage us to really work together though. There are cards that allow us to give some of our resource cards to someone else who might need them more and during the game, you can gain action cubes that are shared between all players and we all have to agree if someone is allowed to use them.

Yet, people never need to give any of their resource cards to someone else, because everyone can draw the cards they need on their own, and the shared action cubes are basically needed when someone has run out of their own cubes while others still have some of theirs left. It’s never a question of whether to allow a player to use the shared cubes or not.

At the same time, Tiny Footprint is actually a really lovely game to play and probably a great introduction into resource management, hand management and multi-use card games. It’s relatively easy to teach and learn and doesn’t actually outstay its welcome. The setup is also always a little different, as you choose the type of household you are, which adjusts the starting emissions for the four tracks, and you can choose different difficulty levels.

Replayability is still an issue though, because some turns feel very mechanical, as the cards dictate what you should do and in what order – but that also means it’s not too taxing on your brain and a game that is challenging enough to play in the evening after work, but not too demanding to be overwhelming.

So Tiny Footprint is a game that I will always be happy to play, but not necessarily one that I’m itching to get to the table all the time.