It is with a sense of deja vu that you desperately type into the console in front of you in a frantic attempt to contact your colleague who, like yourself, has locked themselves into one of the bays on this vast manmade construct. It feels like you have been in this situation before, where both of you were trying to escape alive, as the station’s AI was watching your every move and interfering where it could. As if with the help from your previous self, you manage to switch some of the station’s functions to manual mode, making everything ten times harder. Now, every command you issue will have to be confirmed by your colleague, and the AI will be able to listen in. You know you have only so many commands before the AI will lock you in permanently, sealing your fate forever. Even though the situation feels very familiar, there is something very different. You notice robots on the station, and there is an additional safety mechanism that forces you to lock all bays in clockwise order. You are back on the Assembly space station, like you were before, but this time the Re-Sequence & Override expansion doubles the difficulty. 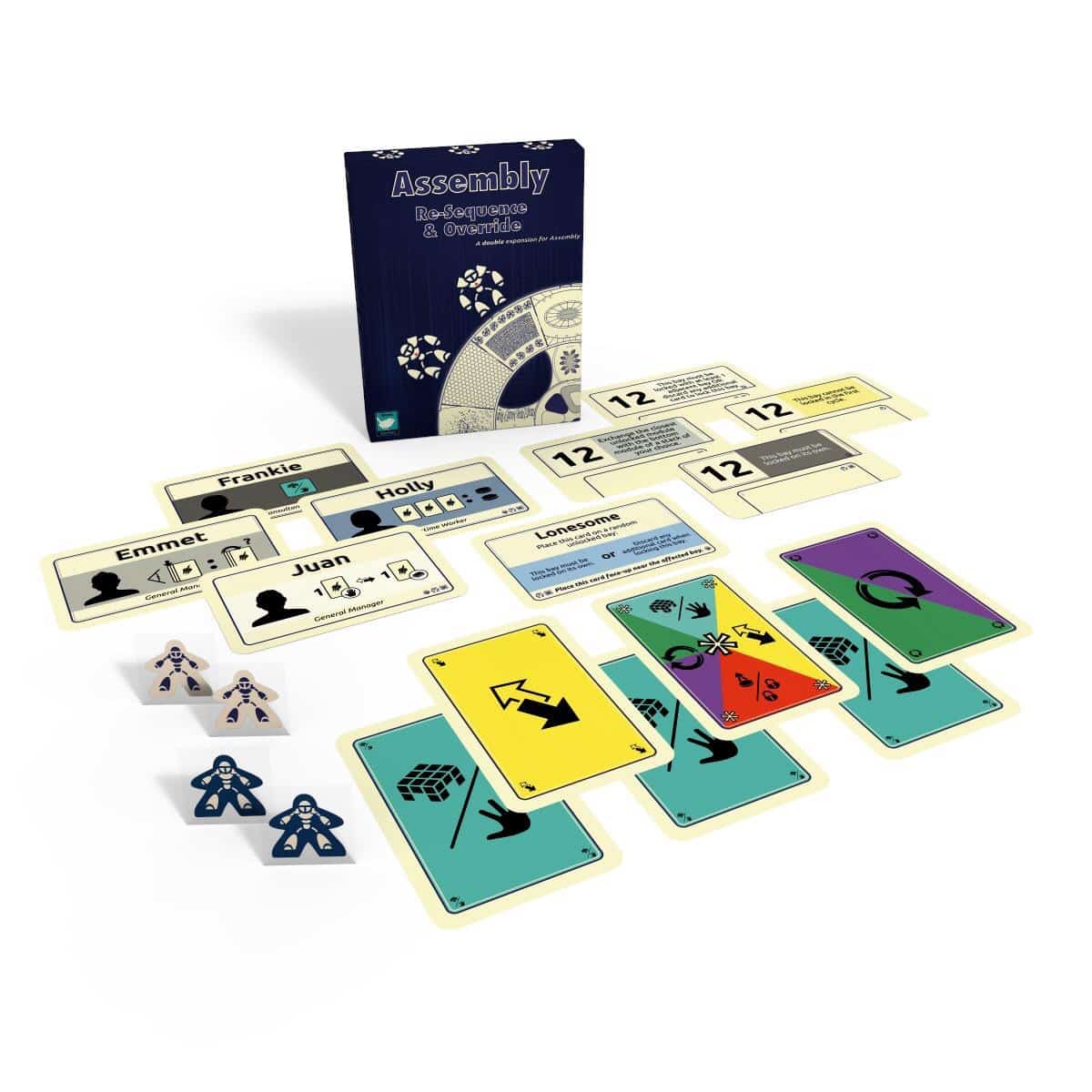 If you haven’t guessed it, I’m talking about the expansion to Assembly by Wren Games, which is on Kickstarter now, along with the new game Sensor Ghosts – read my review for that here. With Re-Sequence & Override, you get two expansions in one, plus some additional cards, some of which can be used with the base game. You will also get a couple of extra meeples, which may end up being custom printed to represent robots. Check out the Kickstarter page for details. In any case, both expansions take the core game to another level, making the puzzle twice as hard, if not more. If you don’t know Assembly, please read my review to find out more.

In Re-Sequence your task is to lock down the space station’s modules, as you do in the core game, except that this time you have to lock all modules in clockwise order, starting with a module of your choice. To make it a little easier, you get some additional cards, but even so, the task still feels as impossible as Assembly does – and it feels just as rewarding when you do manage to lock everything down in time.

Whereas before you could lock any two modules, provided they were in their correct bays, now you can only lock them if they’re next to each other, and only if one of them is adjacent to an already locked bay in clockwise order – except the first one, which you can lock in any correct bay. Suddenly the ability of Jayani to lock three modules in one turn, instead of just two, is no longer so wonderful.

Getting two modules into correct, adjacent bays is difficult enough, and you often end up just locking in one module. So being able to get three modules into place is much, much harder, but not impossible. Re-Sequence is a really wonderful expansion on its own, making it so much harder to beat the space station’s AI in time to escape.

In the Override expansion, you have two robots that roam the space station, and it is up to you to steer them into their correct target bay and lock the bay down in the usual way, with the correct robot in it. Some of the rules of the core game change in this expansion, as you can imagine, because you now control more than just modules. The two robots sound like a very simple and easy addition, but they really change the whole puzzle. The extra level of complexity will keep your brain busy.

You now have to focus on your rotations and decide if you just rotate modules by themselves, the two robots by themselves, or the robots with their modules, when before you just had to think about the direction and the number of steps. It’s not enough to get the robots into their target bays, but you also have to make sure that the correct module is in place as well, before you can lock these two bays. The additional cards feel like a godsend, in particular the new hold card which allows you to rotate a module an extra bay or temporarily lock a module that is already in the correct place as you rotate the others.

However, you still have to think a few steps ahead, all the while hoping that your crewmate can verify the command you play.

Both expansions are great and take the brain teaser that is Assembly to the next level. It’s amazing how a few, seemingly simple additions can change the core game so dramatically. Wren Games has really done an amazing job here, and if you love Assembly, then you will love Re-Sequence & Override just as much, if not more. The feeling of fighting the space station’s AI is even stronger with these expansions, and the tension the game creates is really palpable.