In the Qing dynasty, camels were one of the main means of transport. People would travel for days to cross deserts, wilderness and plains to reach the city of Pingyao, where they would trade their wares to increase their wealth. So an agency of bankers was established to help grow the economy and slowly build up a financial network. Soon, wealth began to accumulate in the city of Pingyao: First Chinese Banks by Wu Shuang from Jing Studio. 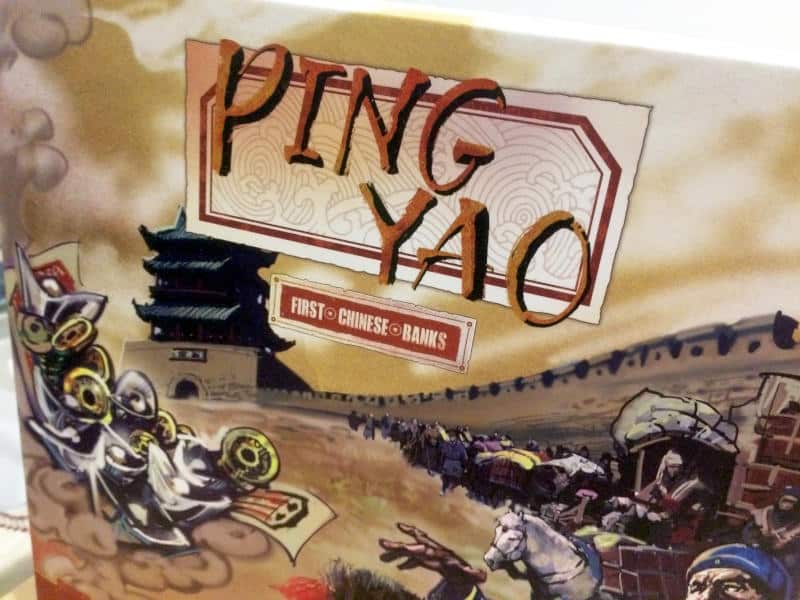 I love how this game is so deeply connected to the history of Pingyao, a city that is well-known for its importance in helping to grow China’s economy. As players, you assume the role of famous Jin merchants. Your goal is to expand the financial network from Pingyao out across China. You will open branches, offer remittance services, take or offer loans and generally try to build up your profit to become the wealthiest banker by the end of the game.

At the core of Pingyao: First Chinese Banks are your dice. Everyone starts with two, one six-sided and one four-sided, but gains a third, another D6, a few rounds into the game. Rounds represent years in the game and at the beginning of each everyone rolls their dice and places them on a shared track numbered 1 to 6 based on the pip result. Dice are resolved from highest to lowest, with turn order deciding ties, and placed on action spaces, which give you bigger benefits or allow you to carry out actions more cheaply the lower the number on the dice.

That in itself already creates a little puzzle. You usually want to go first, but that means your dice is less powerful. Luckily, you can reroll each dice before you place it. If you roll a different number, you still continue with your turn. So, if you’re lucky and roll a lower result, you get a more powerful action.

There is another twist to the dice placement in Pingyao: First Chinese Banks. Action slots remain open to other players, even if a dice is already there. It just gets moved along and the new one is placed next to it. Then, if the new dice’s pip value is higher than the one that was there, the player earns the difference in coins. Conversely, if it’s lower, they have to pay the difference to the central bank.

The only time you can’t place a dice is when there is already one in the space with the same number. So it is possible to block action spaces, but it’s usually not a huge issue, just something you should keep an eye on.

The actions you can take all have to do with building up your banking network. There is a whole raft of money-related spots where you can take loans, which cost you interest, offer loans, which give you interest or you can offer remittances, which help with cash flow and are a sort of temporary loan without interest. You can also open new branches and hire managers for those branches, all of which allow you to handle more money. You can also visit the temple to make donations and increase your fame or you can ask the government for favours, which basically are a way of improving how much profit you make on different types of transactions.

Ultimately, it’s all about reinvesting your money and keeping an eye on cash flow. You take a loan, so you have more money to invest in new branches, which allows you to accept more remmitances, which give you a temporary cash boost, which you can spend on further extending the network. It’s the purest economic simulation game that I have come across. It’s an even better economic simulation than Brass: Birmingham – and that’s saying a lot. I just absolutely love it.

There is more to Pingyao: First Chinese Banks though. The rulebook sets the scene and as you play the game, you get a real sense of the history it tries to reenact. You actually feel like you’re one of the Jin merchants. The artwork, symbology and lettering on the game board, player mats, tiles and many other components really help you get drawn into the setting. It’s not some sort of Western appropriation of Far Eastern culture either. Here is a game about a period in Chinese history that was designed by a Chinese designer. It feels authentic and real.

There is also a real sense of pride. Pingyao: First Chinese Banks feels like a passion project. The designer clearly wanted to replicate the history of the birth of China’s banking system in as much detail as possible. The components add to that feeling of pride and passion. They are all really high quality and contain a lot of little details. I mean, just look at the little silver ingots, the sycee, which are highly ornate and moulded on the actual Chinese currency used during the Qin dynasty. Sycee were made by highly skilled silversmiths for local exchange and contained different motifs and patterns depending on who made them.

I actually wish the rulebook contained more information about the history. Playing the game does make you want to find out more. There are little glimpses in the rules, but it would have been nice if there was more. For example, the actions you take are probably somehow linked back to what actually happened in China at the time. If the rules explained this, at least in broad strokes, it would have allowed players to delve even deeper into the history and understand what their actions meant.

Overall, Pingyao: First Chinese Banks‘ components are just wonderful. The cardboard is thick, the cards are also a good thickness and have a lovely finish, the custom wooden components are gorgeous, the metal components are wonderful, the dice are a good weight and there is even an insert that stores everything really well. I can’t fault any of it. It also looks really impressive on the table.

I do have a couple of tiny niggles though. The rulebook is a bit wordy and feels like it could have benefited from having someone edit the English version. In some places it feels like the translation from Chinese into English is a bit too literal and some of the meaning doesn’t come across properly.

Also, the branch tiles are a bit small. You place components on them, which then make it hard to know what’s underneath – and it’s important to know that. However, if they were much bigger, the game would take up too much space on the table. As it is, it is actually relatively compact, given what sort of game it is. It easily fits on my small table, even with four players.

So overall, Pingyao: First Chinese Banks is a real gem. In fact, it’s a hidden gem, which I think has passed many people by. The game was originally released in 2017, at least according to Board Game Geek, but the Kickstarter was in 2022. I assume that was for the English edition. So it’s actually pretty new and it’s a shame it’s not more talked about.