There seems to be quite an overlap between people who love playing board games and those who love playing video games. Many actually enjoy playing both. There also seems to be a growing overlap between the hobby and video game industries themselves. So in this article, I want to look at what synergies there might be between the two and how both can benefit from each other. 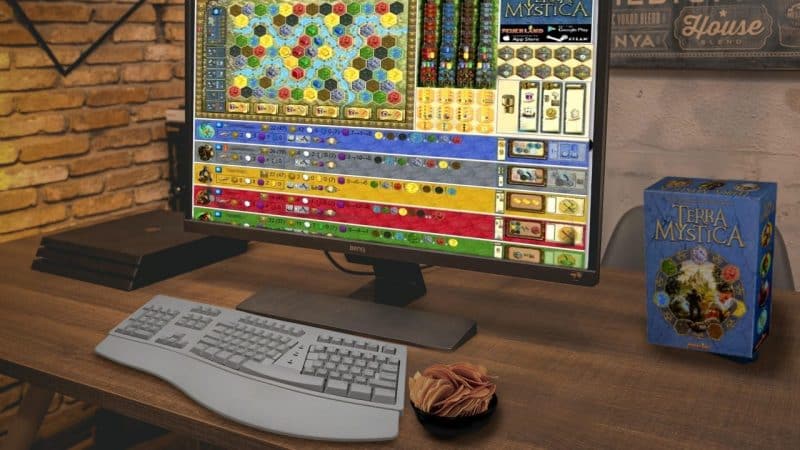 a computer screen showing the digital version of Terra Mystica, with a keyboard in front and the physical game box to one side

On the whole, the hobby and video game industries are often still distinctly separate entities. Even though that’s slowly changing, it is still usually true that the economics in the board game industry work quite differently from those in the video game market. It’s not uncommon that video games create a huge amount of revenue, often resulting in a large amount of profit. For hobby games, on the other hand, margins are small and so are sale volumes. There is also much more investment in the digital game space than there is in analogue games. Many video game projects command the same sort of multi-million dollar budgets that only Hollywood studio productions are known for.

The process for creating video games is also very different to that of board and other hobby games. Creating a virtual product that people can download over the internet and making a physical game, which needs to be manufactured and then shipped to people around the globe, have very little in common. The logistics for both are really quite unlike each other.

There are also differences in video and hobby game communities. People who play video games often have quite different motivations compared to people who play board games. Video gamers often love real-time action and video-quality graphics. They want to simply load the game and play, without having to set up a game or learn rules. Many people in the hobby game community on the other hand want to switch off from digital devices and screens that they otherwise spend most of they’re living hours using or sitting in front of.

However, there are also similarities between the two communities. Both groups of players often want to escape from the day-to-day into another world. They want to occupy themselves, often for hours on end, with something that is as far away from their daily lives as possible. They like to solve puzzles and spend time with friends. Both communities often also enjoy beautiful illustrations and artwork. Neither enjoys spending lots of time setting up the game or learning rules.

It is also true that the video and hobby game industries are slowly growing closer together. Not only have we seen video games being converted into board games and board games into digital games, but we’ve also seen the use of apps in modern board games to a smaller or larger extent. The Embracer Group, a conglomerate of businesses that mostly focus on PC, console and mobile games, clearly also saw similarities when it bought Asmodee, a giant in the tabletop gaming world, back in 2020.

It seems quite clear that video and hobby games have something in common. There is potential for synergies that combine the strengths of both industries. New games could be created that incorporate the best of both worlds.

For example, the hobby game industry could combine its experience of creating games that are easy to learn but difficult to master and that are highly replayable with the video game industry’s experience in creating captivating and engaging games. It’s something that some of the recent app-driven board games seem to have tried to achieve. The apps come with professionally narrated storylines, soundtracks and other functionality which create much more immersive and exciting gameplay.

We have also seen apps that teach the rules of a game, very much like video games do. You follow the on-screen prompts and start taking actual turns. Learning how a game works as you play has been very common in video games for a long time, but is still very rare in hobby games. It’s certainly another possible synergy between board and video games.

There is also the potential of digital solutions offering more people access to hobby games, regardless of their physical abilities. In its simplest form, an app could read out card text and help identify the meaning of icons. It would make games more accessible to blind or visually impaired people.

You could also take the concept of online gaming, which is widely found in the video game industry, and apply it to board games. Imagine a digital solution that allows you to take turns whenever you can, even remotely, while others have the game set up physically on their table. It would somehow blur the boundaries between the physical and digital worlds.

There are clearly also possible economic synergies between board and video games, as the acquisition of Asmodee by the Embracer Group shows. One possibility is what we talked about already: converting video games into board games and vice versa. If a company has an influence on both markets, it can reach a wider audience. If a company creates a digital version of a physical board game, it’s also not a huge amount of extra work. Going from video to board game is a bit different of course.

There is also the potential that people who own a board game want to buy its app version. It’s certainly something I have done. I love playing against AIs on my phone. It’s similar in the other direction. I know quite a few people who couldn’t wait to buy the board game adaptation of their favourite console game. So however you look at it, the shared audience of both industries creates a huge potential for growth. That potential is increased even further when both industries work together as closely as in the case of the Embracer Group.

I also wonder if board game companies could take advantage of tax breaks or other financial incentives that are offered to video game companies. In the UK, companies can claim video games tax relief, for example. There will be similar opportunities in other countries, I reckon. I don’t know the ins and outs of this or what hoops businesses might have to jump through, but if a board game company decides to release their next game not just in physical format but also as a video game, they might be able to benefit from these tax breaks.

So I would argue that there is a lot of potential for synergies between board and video games. It is hard to tell exactly what that would look like, but it seems that there is already a trend that blurs the lines between the digital and analogue worlds. Both industries share a common audience. They have the potential for innovation and accessibility. Ultimately, they can benefit from each other’s expertise in different areas of game development. By working together, the hobby and video game industries can tap into new markets. They could create new and exciting products and increase revenue. Working together can be a win-win situation, not only for both industries, but also us as customers. After all, I think we’re all looking for a diverse and engaging gaming experience.