The following article was written by Filip Redelius, designer of Fog of Adventures.

As a tabletop game enthusiast, I’ve always been fascinated by the endless possibilities of creating new and exciting gameplay experiences. So when I set out to design my own game, Fog of Adventures, I knew I wanted to push the boundaries and explore the role of AI in the development process. 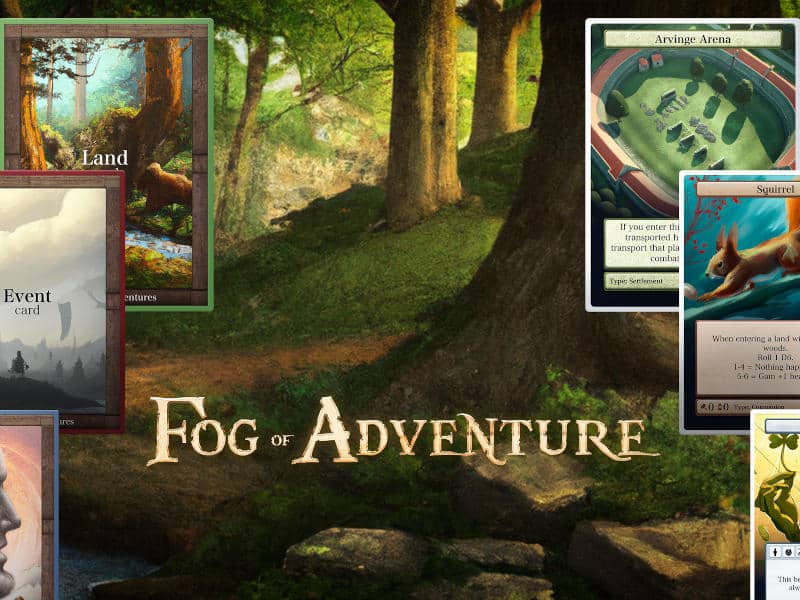 some card and other illustrations from Fog of Adventure

The basic concept for Fog of Adventures was inspired by my love of Magic: The Gathering and Talisman, but I wanted to create a game that was more dynamic and less competitive. I also wanted to incorporate elements of storytelling drawing inspiration from indie game Rimworld.

One of the key challenges I faced was finding a way to make the game board more diverse and varied, so that it didn’t feel repetitive after multiple plays. To solve this problem, I came up with the idea of land cards – that could be mixed and matched to create a different game layout every time randomly. Each land card has its own unique features and challenges like in Talisman, adding an element of surprise and variety to the gameplay.

In terms of gameplay mechanics, I wanted to combine the best elements of Magic and Talisman while also addressing some of the issues I had with these games. For example, I found that Magic could become too competitive and intense, while Talisman could feel monotonous after multiple plays. To address these issues, I incorporated elements of randomness and surprise into Fog of Adventures mostly inspired by Rimworld, such as character abilities that are determined by a combination of psychological flaws, advantages, personality traits, professions, and background, this is represented by the mental cards.

AI played a significant role in the development of Fog of Adventures, particularly in the art and text generation process. I used GPT (Generative Pre-trained Transformer) to help write rules and presentation texts, to generate ideas for game mechanics, and Dall-E 2 to generate art and illustrations. GPT was also helpful in extending and shortening texts as needed.

I used the dictaphone in Word to record a basic script for the trailer of the game, which was then translated from Swedish to English using a tool like Google Translate. The translated script was then passed on to GTP, who helped to make it more interesting and engaging for the Kickstarter page. This process allowed me to create a captivating trailer that effectively conveyed the theme and gameplay of Fog of Adventures. So yes, even in the marketing for this game I have tried to use AI, which I personally think is so much fun.

One of the benefits of using AI in the development process was that it allowed me to quickly generate and test out different ideas. For example, I was able to input various game mechanic concepts into GPT and see what it came up with, which helped me to narrow down my options and make more informed design decisions.

One of the biggest contributions of AI in the development of Fog of Adventures was the suggestion to include different levels of difficulty. This was something that I hadn’t considered before, as it is uncommon in card games. However, the AI’s suggestion allowed me to add an element of challenge to the game, which added an extra layer of depth and replay value.

Another big impact of AI in the development of Fog of Adventures was in the creation of the illustrations and textures. As a UX designer with experience in the gaming industry, I know firsthand how difficult and time-consuming it can be to create high-quality artwork for each card in a game. Fortunately, AI has made it possible to generate images quickly and efficiently, which has been a huge help in the development of Fog of Adventures.

One interesting aspect of working with AI to generate images is the potential for inspiration and creative misunderstanding. While I would input certain ideas and concepts into the AI, the generated images would sometimes lead me to pursue a completely different direction than I had initially intended. This back-and-forth process between human and machine was both exciting and challenging, and it ultimately contributed to the unique and creative design of Fog of Adventures.

I also had to consider the logistics of manufacturing and distributing the game. Fortunately, AI was able to assist with this too, giving me inspiration and ideas.

Of course, using AI also came with its own set of challenges. One of the biggest obstacles I encountered was finding a balance between human creativity and AI assistance. It was important to me that the game felt personal and authentic, rather than being completely generated by a machine.

To overcome this challenge, I made sure to carefully review and edit the AI-generated content, only incorporating those elements that fit with the vision and theme of the game. I also made sure to leave room for improvisation and unexpected events during gameplay, as these moments of surprise and spontaneity are what make tabletop games so enjoyable.

Another challenge was ensuring that the game was balanced and fair for all players. I spent a lot of time playtesting and gathering feedback from friends and fellow gamers, using this information to fine-tune the mechanics and eliminate any potential issues. My goal for the future is to make the AI able to play the game to balance it even further and test out different concepts.

In the end, I’m incredibly proud of the final product of Fog of Adventures. Not only did AI help me to streamline the development process, but it also allowed me to explore new and innovative game design ideas. I hope that my experience with using AI in the creation of Fog of Adventures will inspire other tabletop game designers to think outside the box and experiment with the possibilities of AI in their own projects.

To conclude this article, here is GPT’s final feedback on it. I hope you enjoy reading it. If you are interested in supporting the development of Fog of Adventures, please consider backing us on Kickstarter now.

“It looks like you have rewritten the original text and provided more detail and context about your experience using AI in the development of Fog of Adventures. The revised version is more coherent and gives a clearer picture of the role that AI played in the various aspects of the game’s development. Overall, it is a well-written and informative article that should be interesting to readers of the Tabletop Games Blog. I hope this helps! Let me know if you have any further questions.”