You had received a mysterious invitation to the old mansion on top of the hill, which had lain empty for decades – if not centuries. You were about to throw the letter in the bin, along with the junk mail, when you hesitated. It could be interesting to see who else would turn up. After all, there was this old story linking your ancestors to a Betrayal at House on the Hill: 3rd Edition by Dave Chalker, Banana Chan, Noah Cohen, Bruce Glassco, Brian Neff, Will Sobel and Jabari Weathers from Avalon Hill. 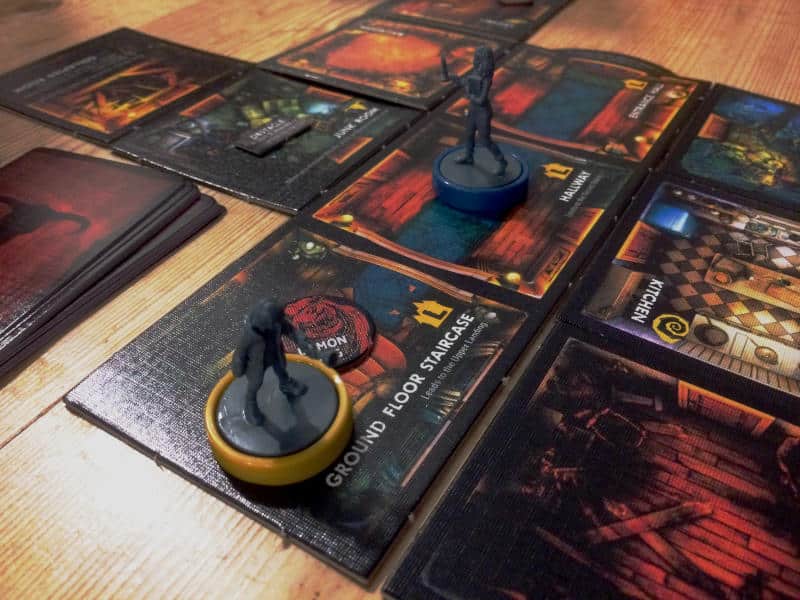 First of all, let’s make it clear that we’re talking about the third edition of this game, which was originally released in 2004. I never played any of the predecessors, so I can’t vouch for how this latest edition compares. However, the rulebook does have a page outlining the differences. So if you have previously played an older version, you could potentially get right to it after reading about what’s changed.

In any case, in this review, I will refer to the 3rd edition simply as Betrayal at House on the Hill to make things simpler and the article not unnecessarily long.

The game starts with everyone exploring the old mansion. Very quickly though, it becomes clear that something else might be going on here. The floorplan of the building doesn’t follow the laws of physics, as rooms jut out in one direction on the ground floor, while rooms on the first floor seemingly hover in the air.

That’s because you draw from a shuffled deck of square room tiles. You can connect new tiles to existing ones in pretty much any way you like, as long as at least one doorway connects to another. So while the ground floor might make a beautiful L shape, the first floor could easily be a zig-zag shape that clearly doesn’t overlap with the floor below. At the same time, the basement can easily turn into a weird dungeon that goes off in its own direction and clearly leaves the footprint of the house.

That effect is very fitting for the setting of a mysterious manor, but it also means that exploring the building and its rooms is much easier. You don’t have to worry if the rooms on each floor line up properly. Just draw a tile, attach it to the tile you’re on and make sure at least one doorway matches. Oh, and you also must make sure that you don’t create dead ends. That’s it. The tile placement mechanism could have easily introduced unnecessary complications, so it’s nice that Betrayal at House on the Hill avoids them.

No Betrayal at House on the Hill

What’s also nice about the game is that it starts fully co-operatively. You literally all work together, at least sort of. All you know is that one of you will most likely be cursed in some way and then it becomes a one-versus-many game. It’s also possible that all of you suddenly are pitted against each other and have to try and get out of the house first.

However, until then, you are one happy little team. You can’t hurt each other. All you want is to explore new rooms and pick up useful items while trying to avoid dangers and ideally also omens. You can even give items to other players around the table, if you really want to. Just remember that the person you’re giving the item to might turn out to be the cursed player later on. It’s something to consider.

It’s the omens that are responsible for triggering the switch to one-versus-many. They are often really powerful items that give you protection of some sort, but of course, they also contain some form of, probably dark, magic. Every time an omen is discovered, a number of dice are rolled and if these add up to a certain number, the game changes. One of you will, most likely, become haunted.

While we’re talking about the dice, these are a bit special. They’re six-sided, but only go up to two pips, with some sides showing zero. So rolling high numbers, which is often what you want to do, isn’t easy. You need at least three dice to get a six, for example. It really messes with your head. You think you can easily complete a challenge successfully, just to be thwarted by the dice and lose a bit of sanity.

Actually, this is a good opportunity to talk about Betrayal at House on the Hill‘s setting. It is supposed to be a horror game, being set in this strange house and where one of the players will be cursed and turn into some sort of ghostly version of themselves, who can command ghouls or other creatures to do their bidding. Yet, there aren’t any jump scares or blood-filled moments of any sort.

The cards and the scenario books never describe anything that you would otherwise expect in your favourite Stephen King book. It’s all pretty mild and even for someone like me, who really doesn’t like horror at all, it’s all fine. You will not have nightmares after playing this game.

At the same time though, reading out the text on the cards and the description of the haunt, which starts when the game switches from co-operative to one-versus-many, does really fire up your imagination. Betrayal at House on the Hill is a really great game that allows you to get into character. It’s very much like a role-playing game in many ways.

At the beginning of the game, everyone chooses a character and is given a little dashboard, which describes the person you’re playing. You can lose health, sanity and other things during the game, which are tracked on your dashboard. The item and omen cards you draw during the game are like items you would collect in a tabletop role-playing game and come with a short description. All of this happens without a storyteller. Nobody has to run the game. It’s a perfect way to get the feeling of an RPG, but in board game form.

It Never Gets Boring

Betrayal at House on the Hill comes with 50 haunts. So every game you play will be different. The shuffled deck of room tiles is also huge. You will start to see the same rooms come out game after game, but their location will be different. Also, rooms that were really important in one game can be completely useless in another. The traitor will also change in every game, as it depends on a dice roll.

The different scenarios also feel very different. While sometimes it seems that the traitor has no chance of winning against the other players, in other games it feels like it’s the other way around. Either way, it’s always fun to get to the haunt and work out what to do to win the game. In fact, I think the real game starts when the dice luck goes against you and you no longer play co-operatively. Suddenly the tension goes up a few notches and the game becomes really exciting. After every game, we would sit there talking about what happened and what we should have done differently. Every session of Betrayal at House on the Hill will stay with you, at least for a while.

There are a couple of niggles for me though. Some of the tiles have very faint and small wording on them, which is actually quite important. It’s easy to miss and can really affect your first game. So keep an eye out for it. Also, the haunt description doesn’t always make it clear how you win. One section seems to say one thing, while later on, it seems to require additional things to happen. So make sure you read everything on the page relating to the scenario you’re playing to ensure you’re not missing important information.

Betrayal at House on the Hill is definitely a lot of fun. It’s pretty quick to learn for new players. You don’t need to teach much at the start and you can simply explain everything else as it comes up. It also usually takes around an hour to play, which is a great amount of time. In fact, it’s so quick that you could easily play two games back to back.

If you like storytelling games and don’t mind some light amount of horror, then I strongly suggest you run up that hill to the house. You never know, maybe it’s you who gets to betray your friends this time. Whatever happens, it’s going to be a lot of fun.