Looking back, building that last pottery had been foolhardy. Investing in the rail network would have been much more lucrative and sensible, but you had wanted to compete with your contemporaries. Maybe if you had been more careful and had planned further ahead when you first started out as an entrepreneur, things would have worked out differently. But then, nobody could have predicted the Industrial Revolution to be so transformative as it had been. Yet, overall you had done well and were certainly top Brass: Birmingham by Roxley Games. 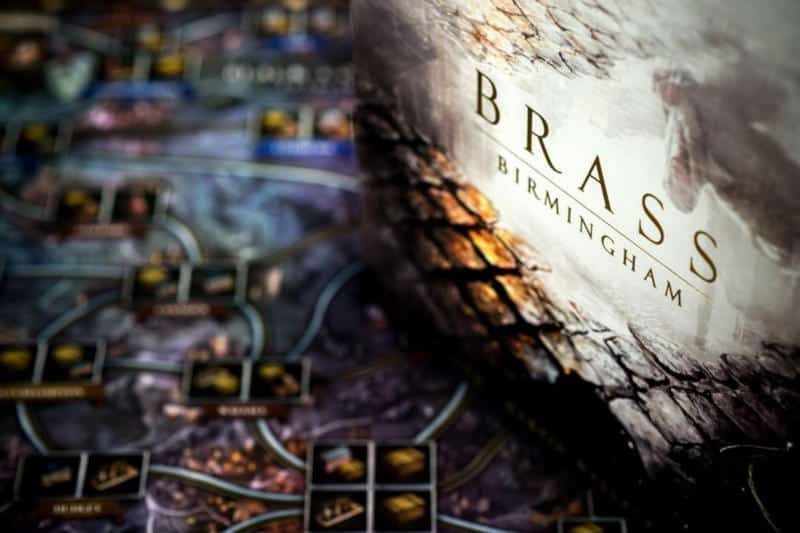 When a game is celebrated as being complex, your first instinct is to be intimidated. It took me a long time to pluck up the courage and suggest to my weekly games group that we should try Brass: Birmingham. I felt that over the years we had tackled more and more complex games and that now we were finally ready to go up to the next level of complexity.

Convincing the others actually turned out not to be too difficult, because after having moved our weekly meetings to an online world, we had discovered more games on the various platforms and were happy to try out new things, provided one of us would learn the rules.

We had spoken about playing Brass: Birmingham for a couple of weeks, but none of us had had the time to learn the rules, ready to teach the others. However, one week it was just the two of us and we decided we were happy to learn the rules together and just go for it. We intended to teach the third person in our group during our next online games night, so investing half an hour going over rules together seemed a very worthwhile effort.

Brass: Birmingham, like its sibling Brass: Lancashire, which in turn is a reprint of the original Brass, is rules-heavy. A large chunk of its complexity comes from the sheer number of rules. The turn order itself is actually relatively simple, consisting of discarding a card and taking an action, then drawing up again, and pretty most of what you do during the game is either build an industry or a network link – but the devil is in the detail of course.

The card you discard defines where you can build and what you can build. There are also things like your network and whether you’re connected to something else to consider. It also matters what resource you produce or consume, because each one works slightly differently.

There is a lot of terminology to learn, the behaviour of the cards and industry to understand and the sheer amount of tiles on your own player mat to grapple with. It feels very overwhelming, but the game tries to help you.

Brass: Birmingham is played over two eras: the canal era and the rail era. Yet, on your first game you only want to play the first era, so you can ease yourself in. The very first time you play, the canal era alone will probably take as long as playing the whole game once you’re a bit more experienced.

So, don’t be put off by the rules complexity. In the end, like with any game, once you’ve played it once or twice, things start to flow really quickly and you’re starting to get a feeling for where your victory points come from. What felt like exceptions or special circumstances becomes second nature and intuitive.

In fact, when I played my third game of Brass: Birmingham, I started to play a bit more strategically, even tactically, looking for opportunities that another player created by their actions. After all, the whole game is very much about being very careful about deciding what to build where and when and in what order.

If you get it wrong, you can set up an opponent for a huge windfall that will not only give them victory points, but might actually completely ruin your own plans and effectively lose you the game – and that’s what makes this game so wonderfully exciting for me. Yet, it’s not just the usual player interaction where your actions just ruin someone else’s game.

In Brass: Birmingham, things are a bit more complex, as you would expect. You often build industries that actually benefit another player, giving them coal or iron or beer. Yet, when these resources are used up, you will gain an even bigger benefit in the form of victory points. It doesn’t end there though, because a player can gain an additional benefit from your benefit by building network links.

It’s a network of dependencies and everyone is trying to snatch a few victory points where they can, in the hope that the final point difference will be enough for them to take the win. In the process, you’re helping others who actually help you, which then helps someone else, in sometimes unexpected ways and at unexpected moments.

If you play really well, and everyone plays really badly, you always help yourself, but in reality, you can’t do anything without considering how it could help someone else. It’s a wonderful form of player interaction that Brass: Birmingham implements excellently.

The whole process is made harder, because you can’t just build anything wherever you like. Your hand of cards limits what’s possible, so from the start you have to work around what options you have been given by fate. It adds another level of strategic thinking, as if the game needed even more complexity. If you discard the wrong card at the wrong time, you may curse yourself later, after already having cursed the cards for conspiring against you.

Yet, the cards don’t actually introduce a huge amount of luck. In fact, I’d say it’s minimal, hardly noticeable. You’ve got a hand of eight cards, which basically allow you plan eight turns ahead. That should be more than enough to come up with a decent strategy, without allowing you to plan ahead too far.

So once you have worked up your courage, worked your way through the rules and made it to the end of the canal era, Brass: Birmingham greets you with another, quite nasty, surprise. Sure, the game will ask you to tot up everyone’s victory points at this stage, lulling some of you into a false sense of security, because they have managed to get a 20 point lead over everyone else, while others are close to giving up, because they are so very far behind.

Yet, the surprise that the game has to offer isn’t the difference in victory points. After all, everyone will score again at the end of the rail era. No, the nastiness in the surprise comes when everyone has to remove pretty much most of what they’ve built on the map so far. It’s almost like a hard reset – except for those among you who have managed to set themselves up for the rail era.

Suddenly, that 20 point difference doesn’t look that big any longer. In fact, the leader will start to sweat a little as they realise that they have to start from scratch, while others are in prime position to really benefit from the age of steam that is coming next.

By now, everyone will also have reached an income level that means money is no longer really of any consequence – except for deciding turn order each round. If not by the end of the canal era, then a few rounds into the rail era, everyone will be so rich that it really doesn’t matter what they build or how much they have to pay. Chances are they either get most of it back at the end of the round or even earn more than they have spent.

Also, money is worth nothing at the end of the game, so when you reach the half-way point in the rail era, you may as well put everyone’s money back in the bank and use it to record how much everyone spends on their turn, so that you can decide turn order for the following round. Money really has no further use now.

I love this. It feels like the game is telling me that for the rich, money loses all meaning. A million pounds is just as unimportant as a hundred million – or in Brass: Birmingham terms, it doesn’t matter whether you’re spending £15 plus some coal from the market or only £5. You won’t miss it and probably get it all back again.

Yet, money still remains important as it pertains to player order, and that’s actually quite a critical point. As the map fills up, it’s increasingly more difficult to find spaces that will only, or at least mostly, benefit yourself. Beer is in high demand for example.

So if you are clever and can ensure you spend the most money in one round, so that you’re last in the next round, then spend the least in that round, you will effectively get a double turn. That can be the only way to build a brewery and immediately use the beer to sell goods or otherwise gain victory points. If you’re clever about it, manipulating turn order can have a huge impact later in the game.

Brass: Birmingham is just a glorious mix of area control, hand management, positive player interaction, which actually and ultimately benefits yourself, turn order manipulation and plenty of strategic and sometimes tactical thinking. It’s an intimidating game that begs you to try it, and when you do, you will just squeal with frustration, enjoyment, anger and pure excitement. You will ask yourself what you could have done differently and whether the canal was actually worth building. You won’t be able to wait for another game where you can test your new strategy and ideas, only for the cards and the other players to spoil everything again.

In a word: Brass: Birmingham comes highly recommended. Go and buy it now!