Yes, it’s time for my annual list of the best games of the year. As has become tradition, I also announce which game won the accolade of the Top Table Award, which is now in its fourth year. However, you have to be patient for a little while longer, while I list the best five board games of 2022 in reverse order. 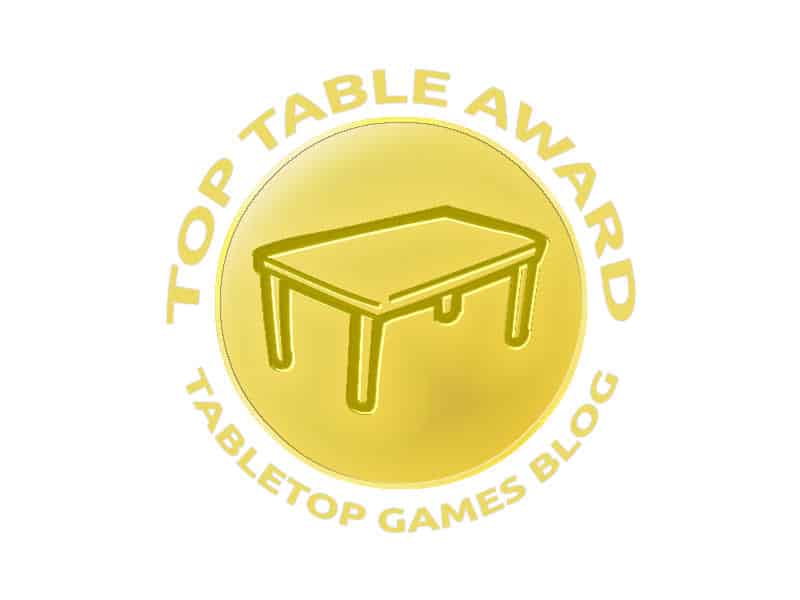 Please don’t forget that my list isn’t restricted to games released last year. My top five were selected from games I played in 2022, irrespective of their release date. There are quite a few games that come out near the end of the year. That means that I won’t have had much of a chance to buy these games or get review copies, let alone get them to the table. So, to be fair to these games, I happily include older games in my list. If you’re after a list of 2022 releases only, then you’re in the wrong place.

Even so, I have played over 60 new-to-me games in 2022, which is an average of just over one new game every week of the year. I have also had over 350 plays in 2022, which is around one play every day. The most-played game for me in 2022 is Town 66. It is so quick to teach and play and has such a wide appeal that it’s really easy to get to the table. The game that represents the biggest divergence from the usual types of games I play is the tabletop skirmish game Gaslands: Refuelled. It is my first foray into tabletop games and I guess it’s about time.

I think 2022 was a really good board game year and it was tough for me to choose my five favourite games. Anyway, here goes…

Released last year when lockdown was in full swing, Crescent Moon was a game that I wasn’t sure if I would ever get to the table. With a minimum player count of four people, it took a while to get the full complement of my Tuesday night games group together and convince everyone to try this asymmetric game of influence, intrigue, betrayal and battle. Teaching the game to everyone seemed to take even longer, as there are quite a few things to consider and everyone has to learn their faction themselves. The game doesn’t really make itself easy to learn either, with double-side A4 sheets for player aids and a rulebook that could do with a good few tweaks.

Mind you, a game that is set against the harsh background of the Middle East in the 10th century and onward was always going to take a while to appreciate fully. It took me two plays to better understand how the game worked and get a glimpse of what was still on offer and remained unexplored until future game sessions. Crescent Moon packs a lot into what is really a relatively basic ruleset and provides players with opportunities to forge alliances that last just long enough to give victory to the person who is better at negotiation and betrayal.

I know I said that the game has a relatively basic ruleset, which is true, but there is a lot of terminology to learn and lots of things to take in, which can be overwhelming during your first game. If you read my review of Crescent Moon, you will see that I had quite a few issues with the game. However, despite these concerns, it still made it into my top 5 best board games of 2022. That’s simply because the game rewards players who persevere and break through the initial complexity with an exhilarating two to three hours of gameplay with plenty of direct player interaction and a little history on the side.

When it comes to Nemesis, you can’t help but have the word Alien in your head. After all, if Awaken Realms had been able to acquire the licence for this popular 1970s science-fiction, space horror film franchise, that’s the word they would have used. As it stands, you, as the player, have to make the relevant replacement yourself and that’s absolutely fine.

The plastic miniatures that come with the game as well as all of the other components really help you feel as if you were one of the characters from the famous film, even though none of them is actually named in the game. You can be either captain Dallas, warrant office Ripley, ship navigator Lambert, technician Brett, executive officer Kane (yes, you can get infected and die a horrible death in Nemesis), science officer Ash (even though technically, none of the characters in the game is an android) or chief engineer Parker.

Everyone has their own secret mission, some of which may even complement each other. So while you may help each other to start with, you will eventually betray your fellow shipmates in order to fulfil your own goal. It is possible that multiple players win Nemesis, and there are no tie-breakers for that situation, but it’s just as likely that everyone loses – and it’ll not be clear until right at the end. I suggest you read my review of the game to find out more, but let me say that playing Nemesis is an amazing experience. The game really deserves its number four position in my list of best board games of 2022.

Once in a while, along comes a game that really hits the spot for me. A game that rekindles something in me that I had long forgotten about. One of these games in 2022 was Pingyao: First Chinese Banks for me. I have not yet reviewed it, simply because I haven’t had the time, but it still deserves to be on my list of top board games of last year.

As a dice worker placement game, it is one of the three or four games that use this mechanism that I added to my collection in the last 12 months. However, the action spots in Pingyao: First Chinese Banks aren’t exclusive. Instead, depending on what dice is already there, you have to pay or gain coins. The dice also decide the order in which players take their actions. It creates a certain amount of randomness, that doesn’t dominate the game. Players have plenty of opportunities to mitigate bad dice results.

What makes Pingyao: First Chinese Banks really interesting to me is that it’s a true economic simulation game. You use your money to make more money. You take loans that give you capital to reinvest for a better return. The game is really exhilarating and creates a very interesting gameplay experience for me. It scratches an itch I hadn’t felt in a while and it scratches it really well.

I hope to review the game very soon, so keep an eye out and check if this game, about the beginnings of Chinese banking in the region of Pingyao, which was created by a Chinese designer and published by a Chinese company, is for you. In the meantime, it takes its rightful place as number three of the top board games of 2022.

I think there is a trend for me in 2022: economic simulation board games. They take places 2 and 3 on my top list of board games of last year. I first played Brass: Birmingham in digital format in 2020. I then bought the physical copy in 2022, along with the nice poker chips, which I use in many other games. Setting up the game takes a while, but I think playing it is a much nicer experience. It’s just such a tactile game, for the lovely, heavy poker chips alone.

Brass: Birmingham is a heavier game. The rules aren’t actually that difficult to understand, except maybe understanding the difference between how you consume coal, metal and beer. The complexity of the game mostly comes from the decisions players make. You can’t avoid helping others, but you want to make sure that you get the most benefit out of it and that you help the player who is seemingly in the lead the least. It’s such a lovely tug-of-war between giving and taking. Accordingly, the further you get into each of the two eras in Brass: Birmingham, the harder every decision gets.

While I have never played its sibling Brass: Lancashire, I feel that Birmingham creates an exciting additional level of interactivity through the use of beer, without making it overly complicated. In fact, it feels as if beer is vital to the gameplay and I can’t imagine playing without it. Either way, Brass: Birmingham deserves its number 2 slot in my list of best board games of 2022.

As I wrote in my review, the game itself also has its own history. While the first edition’s rulebook contains a long section titled “A Defense of British Colonialism”, which seems to imply that the game portrays a positive period in history, the second edition clearly does all it can to distance itself from its predecessor. Specifically, the second edition’s rulebook explains that some of the notable contemporary people were portrayed as heroes by Victorians, when in fact their involvement was probably more incidental than decisive and that Afghan history makes no mention of them.

Indeed, Pax Pamir: Second Edition puts players in the role of Afghan leaders who try and take advantage of the few opportunities that present themselves to unite the people and the country and create some sort of stability, at least for a short while. At its core, it’s a tableau builder, but in reality, it’s much more than that. It will take a while to really understand the game, not just because you need to learn what the over 140 cards do, but you also need to get a feeling for when you need to change your allegiance and side with whoever seems to be most likely to win. It’s all about tactics.

Ultimately, Pax Pamir: Second Edition is clearly the best game of 2022. It deserves the top slot and the title of Top Table Award 2022. Congratulations to Cole Wehrle and the team for being so brave to take this game to the next level and make it into what it was always meant to be.