The apocalypse has finally come. After the breakdown of society, survivors have formed gangs of motorheads, that scour the wasteland for rare and very precious petrol reserves. Their vehicles are highly tricked-out, finely tuned, heavily reinforced and equipped with a wide range of weapons. They will stop at nothing, which is exactly why a small number of the surviving rich elite have organised deadly races, where the gangs are pitted against each other to be the first to reach the finishing line and claim their prize – or be the last survivor in the arena of these Gaslands: Refuelled by Mike Hutchinson from Osprey Games. 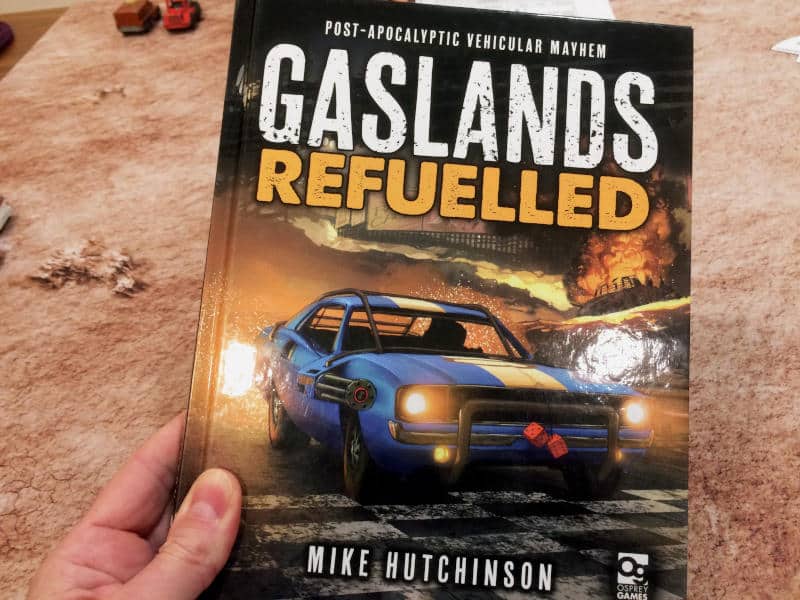 the cover of the hardback rulebook for Gaslands: Refuelled

I am finally reviewing a tabletop miniatures game. Well, I say “miniatures”, but Gaslands: Refuelled tries to keep everything really simple. All you need are two toy cars per team, at least to start with. Maybe you have an old box of Matchbox or Hot Wheels cars sitting in your loft. If not, there are plenty available for cheap from eBay or a second-hand shop. If you want, you can customize your cars with guns, rams, metal grills and anything else that you may have seen in one of the many Mad Max films. However, it’s up to you.

You also need a handful of six-sided dice. Add a couple of pens and then photocopy the movement templates and vehicle dashboards from the back of the rulebook and cut them out.

You also need to set up your course. Maybe use wooden blocks or scenery from another game. You just have to make sure you have a starting line, two gates and a finish line, at least for your first race. Feel free to go with a figure of eight, a circle, a U shape or whatever you want. Feel free to sprinkle some obstacles around the track to add some extra excitement. You can really go wild. It’s all pretty much up to you.

Finally, you need to line up everyone’s cars at the start line and you’re ready to start the countdown.

Keep the rules for your first race simple. Getting used to what happens when can take a little while, but there is a free quick reference you can download and print out to keep to hand as a reminder. In principle everyone activates one car in turn, starting with the first player. You keep going until everyone has activated all of their vehicles, as applicable.

An activation is basically a matter of choosing a suitable movement template, lining it up with your car, rolling hazard dice and dealing with the result. You’ll either complete your movement as intended, slide or spin your car. Sometimes you actually want to slide or spin, because it will give you a better position for your next turn.

You can also choose to change gears and that’s a really important decision. A higher gear means that your vehicle will activate more often. So for example, if you’re in 3rd gear and everyone else is in 1st, you will move your car twice more in the same round. However, being in higher gear also means your vehicle has a higher momentum, which increases the risk of slides and spins and also means you can no longer make really tight turns. Higher gears reduce the options of movement templates you can choose from.

So you really have to plan ahead. If your vehicle is coming up to a tight bend or an obstacle, you might need to change down a gear to give you more options. However, sometimes you intentionally change up a gear and go head-on into another vehicle. After all, Gaslands: Refuelled isn’t necessarily about getting to the finish line before everyone else. Being the last player with a functional vehicle is enough to win.

I think the gear mechanism is probably the cleverest part of this game. Pretty much everything you do is based on the gear you’re in. Some of the most important decisions are about when to change gears and how many steps. You don’t want to go down too early, but you also don’t want to smash into an immovable barrier and spin out.

Gaslands: Refuelled really takes me back to my childhood. Playing with Matchbox cars is so much fun. Rather than pushing them around freely, you’re bound by the movement templates and rely on good dice rolls. However, the rules create a really interesting game. There is a lot of freedom in how you set up the course and how you approach the race. There is also a certain amount of predictability that allows some planning. It all comes together in a really interesting experience and a relatively fast-paced game.

Your first game will feel a bit slow, let me say that now, but once you get used to it and have a race under your belt, you will be a lot faster the second time around. The game will never feel super fast and when a car collides with a barrier or another car, you have to imagine what’s happening. You don’t really play it out for real. It’s a little bit hidden behind the dice rolls and updating your vehicle dashboard. However, there is nobody stopping you from making crash or explosion sounds, of course.

The more you play Gaslands: Refuelled, the better you will get at it. You will quickly realize that you can use your vehicles in different ways. While one car might try to be the first to cross the finish line, you could keep the other car back and use it as a battering ram to slow down your opponents or even completely bring them to a halt and knock them out of the race.

The basic rules are pretty simple and won’t take too long to learn. If you want more, the rulebook allows you to add other things when you’re ready. There are pages and pages for different factions, each with its own special abilities. Some factions want to perform clever stunts, while others just want to blow things up.

You can also add audience votes to your gameplay, which is basically a way to get additional upgrades or allow one of your disabled vehicles to rejoin the race. There are many ways of getting audience votes and it sometimes depends on the faction you’re playing.

If you want, players can customize their vehicles with weapons and other upgrades before a race. There is a simple cost system and a long list of items you can add. From rams to roll cages to bombs to rockets and everything in between, there is plenty to choose from.

You can also buy plastic versions of the movement templates, if you don’t like using paper photocopies. Personally, the paper cutouts worked more than well enough, but you have the option, which is nice.

It’s really up to you how much you want to add to the game. You can make it as simple or as complicated as you want. If you really get into Gaslands: Refuelled, there is plenty for you to add to create a wonderfully deep and varied experience. However, even the starter rules should give you plenty of enjoyment for a long while.

So, if you want to make a foray into the world of tabletop games, then I think Gaslands: Refuelled is definitely worth a look.