Waking up from years of hibernation, all of us were a bit dazed and confused. Temporary amnesia was very common and while we all knew our names, we only had some basic memories of what had happened before or what we were meant to do. We weren’t even sure which ship we were on, let alone its layout. When we saw that one of our colleagues was dead and had a gaping hole in their chest, we knew something was seriously wrong. Nobody was sure what caused our colleague’s death. We knew we had to work together to get out of this nightmare, but the trust in each other had evaporated. So we set about exploring the ship and finding our Nemesis by Adam Kwapiński from Awaken Realms. 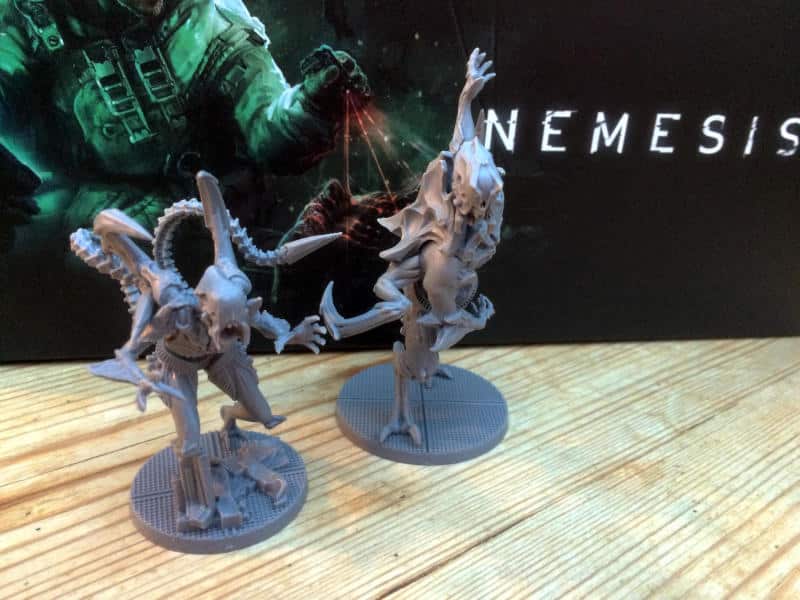 Before you say anything, let me make it clear that this game is basically a board game version of the famous 1979 science-fiction horror film Alien. Everything you do and experience in Nemesis is very much like re-enacting the film with your friends, but nothing is called as it is in the film. So you’re on a spaceship, but it’s not the Nostromo. One of your colleagues is dead with a gaping hole in their chest, but they’re not called Kane. The first player token is a cat, but it’s not called Jones. There is an evil corporation that wants you to do their bidding, but it’s not the Weyland Corporation.

Nemesis is an amazing mix of hand management, resource management, dice rolling for noise as well as attacks, random events drawn from an event deck and the surprise of stumbling through the ship to uncover which room is where, while also revealing damage or fire along the way. Setup and breakdown do take quite a while, because there are so many bits and pieces, but gameplay is actually really straightforward. So even though it sounds like there is a lot happening in the game, and there is, it’s really not that difficult and very similar to many other co-operative games, such as Pandemic, when it comes to gameplay.

You have a deck of cards that you use to pay for common actions or play for their action. Sometimes having to pay additional cards to carry out an action. You only have two actions on your turn. So you have to choose carefully which cards to use to pay for actions and which ones to keep, just in case.

A player’s turn is mostly a matter of moving into a room, rolling for noise, searching a room or picking up items. If you’ve been too noisy, an alien appears. You will either run away or fight it. You can reduce noise by moving carefully or following one of your colleagues into the same room. Often it’s a good idea to stay together, so you can fight aliens as a team. However, at the beginning of the game, you probably want to spread out and explore the ship. That way, you can cover a larger area more quicky, but you’re also more likely to attract unwanted attention from aliens.

Solo and co-operative modes are basically the same. You select a number of objectives equal to the number of players. You work together to complete these objectives before the round timer runs out. Even when everyone works together, you will probably still take it to the wire. It’s not easy to complete all objectives and then either go into hibernation or escape on a pod. You probably end up with infections and die in your sleep, which isn’t too much of an issue in co-operative mode. After all, as long as all objectives have been completed and at least one of you makes it out alive and uninfected, you win the game.

What is also nice in co-operative mode is that, if one of you dies, you can drag them into the med bay to revive them. However, sometimes it’s best to leave them behind, because you’re about to run out of time and lose the game. It’s a tough call to make though.

My favourite mode is competitive though. That’s where the real fun starts. Sure, you come out of co-operative mode with great stories to tell. It’s amazing when you manage to complete the last objective, activate the self-destruct and get out in one of the escape pods alive, after which you scan your infection cards to find that you’re fine. However, competitive mode adds the element of never being sure if your colleagues are on your side or just lying to you. You always wait for someone to backstab you at any point.

You do have to work together or nobody will make it out alive, but it’s more about helping someone else just enough while giving yourself the bigger benefit. Sure, I will open that door for you, if you ask me nicely. In reality though, I’m secretly hoping that you walk into that room and the queen alien appears and kills you, so I complete my objective of killing player number 2.

It’s even more amazing when two of you have a similar objective. In one game, I had to make sure player 2 died as well as get out alive myself. Another player had basically the same mission, but they had to kill player 3. So while we didn’t know we were trying to achieve sort of the same thing, we were really working together. Neither of us trusted the other at any point during the game.

So when the other player set off the self-destruct and headed for the escape pod, I thought they were trying to kill us all. That sort of was fine with me, because the player I had to kill was still very much alive. I didn’t know it at the time, but the player they had to kill was in hibernation. So their only choice was to activate the self-destruct. Luckily, I managed to get to the same escape pod as them just in time before it jettisoned. That left the player I had to kill on board. The problem was, they knew they couldn’t disable the auto-destruct or get to a different escape pod in time. So they decided to hibernate themselves, just so they didn’t have to face death.

It was amazing to watch when the other player and I revealed our secret missions. We were basically both killers planted on board to kill the other two players in this four-player game we played. Yet, we didn’t know about each other. It was pure luck that we escaped on the same pod together. So in competitive mode, the aliens aren’t the real threat. It’s the other players that may turn out to be your nemesis.

I would definitely recommend you always play Nemesis in competitive mode, when you play with others. It just adds a huge element to the game. There is this uneasy feeling when you’re not sure whether you can trust another player when they assure you that the engines are working and that the ship is heading safely back to Earth. You sometimes hope that another player will do exactly as you say, because then they help you complete your mission – but you can’t be sure.

I also think the role-playing element comes out much more in competitive mode. Just imagine having to explain to the other players why you’re holding onto this alien egg. Coming up with a suitable excuse that doesn’t raise any suspicion is wonderful, especially if the other players all have their own hidden agendas. Maybe they offer to look after the egg for you for a while, but then just blow it up instead. If they can come up with a convincing reason, then even better.

No One Can Hear You Scream in Nemesis

Nemesis is just an amazing game. It’s the closest to a role-playing game in board game format that I’ve seen to date. Sleeping Gods does something very similar, but the competitive mode in Nemesis is so much better and so much more fun and exciting. It’s definitely my first choice now, especially because I love the Alien franchise. I can’t recommend it highly enough. Yes, it takes about 3-4 hours to play, but that’s not unlike other RPGs – and there is no need for a storyteller. Just get into character and let the adventure unfold in front of you.