A brand new greenfield site was ready for development. The architects had submitted their drawings and the planners were satisfied that everything was in order. Everyone was in agreement that this new place should grow organically, but had to follow strict rules. New houses could only be placed in certain ways to create this brand new Town 66 by Christoph Cantzler and Anja Wrede from Oink Games. 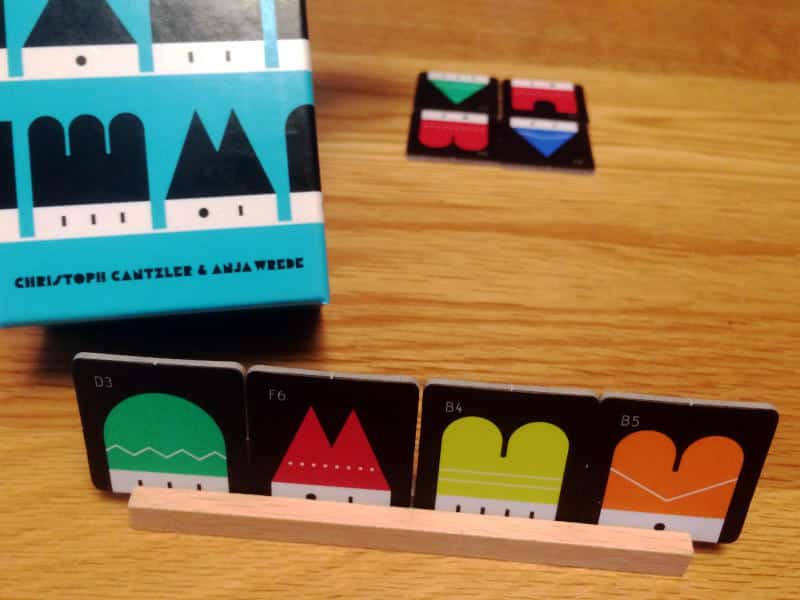 If you haven’t tried an Oink game before, then give it a go. When you find one you like, you will want them all. Every game comes in a wonderfully small cardboard box that fits nicely into your handbag or jacket pocket and that is easy to take out and about with you. Most games don’t take up a lot of table space either and can be played virtually anywhere. The components are always gorgeous and have a certain Japanese feel about them. They are also easy to explain and learn and quick to play. They’re just wonderful.

Town 66 is no different, of course. The box is packed to the brim with components: four wooden tile racks, for your cardboard tiles and a lovely little black cloth bag to hold the tiles and from which you draw. There are also a number of rules leaflets in different languages. Oink Games rules can sometimes read a bit odd. I assume they were translated by someone who doesn’t speak English natively. However, as you start playing the game, your questions will be answered. It’s all pretty straightforward.

Town 66 is basically a 2D puzzle. Together we build a town in the middle of the table. On your turn, you place one of your titles horizontally or vertically adjacent to a tile that’s already out. However, your tile cannot be the same colour or shape of another tile in the same row and column. It all starts out quite simple, but about halfway through, it gets a lot trickier.

When you play the game for the first time, you won’t understand why you have four tiles to choose from. It seems like way too much choice. Two tiles seem more than enough. So you merrily get rid of one of your tiles and reduce your hand size. After all, the aim of the game is to have the least tiles at the end. It seems obvious that you discard your tiles as quickly as possible.

That all changes as more tiles are played into the middle. Suddenly you wish you had more choice and kept some of the tiles you so greedily put back into the bag earlier. The two tiles you have in front of you clearly aren’t very helpful. You might scrape by and manage to place one of the tiles and then you desperately draw up again, hoping that you get a more useful tile.

I would say it takes a whole game before people realize what is expected of them. Town 66 is a bit counter-intuitive in the sense that the game wants you to reduce your hand size, but at the same time, you need to hang onto your tiles so you can still place one on your turn. You need to choose the right moment when it is safe to put tiles back into the bag and limit your choices.

So ultimately, Town 66 is a push-your-luck game. Not only do you want to end up with the fewest tiles, but you also want to stay in the game for as long as possible. Sure, the strategy of getting rid of all of your tiles as quickly as possible and then hoping that nobody else can get rid of theirs is valid and I’ve seen it succeed on quite a few occasions. However, it’s risky and you’re usually better off playing for longer and only slowly reducing your hand of tiles.

At the same time, you see other players getting rid of their tiles and you feel the pressure mounting to do the same. You have to stand strong though and pick the moment that’s right for you. After all, the other players may just have bad tiles and take the opportunity to get rid of them early. On the other hand, maybe they are confident that they can empty their hand while no one else can.

There really is no right or wrong in Town 66. Every game is different. In some games you just have to reduce your hand and hope for the best, while other times you have an unlucky draw and can’t place any tiles. You think it’s all over because you’re out of the game and still holding a bunch of tiles. You think you’re going to lose, when it turns out that nobody else can play their tiles either and you just happen to have been lucky to get rid of one of your tiles while nobody else had – and you win.

You really can go through a game of Town 66 and experience all the highs and lows. Most games are full of excitement and while some are nerve-racking from the start, other times a game starts slowly and calmly and then builds up to a crescendo. It’s such a quick game that you probably play it a few times in a single session. It’s that addictive.

So if you want a quick, fun-filled, exciting 2D puzzle with push-your-luck, then Town 66 is definitely for you. While you’re at it, you might also want to check out my other reviews of Oink games. Chances are there are more that you will like.