Sailing the winds in your sky pirate ship, you and your crew land on a different island each day, looking for treasure, adventure and glory. You need to be fast though, because you’re not alone. Other ships in the fleet have followed the same course and they want their share of the varied loot. If the crew member you send to the island is too slow, they will not come back with valuable treasure, but with a terrible curse or worse, they will not return at all. Only the best pirate will make it in Libertalia: Winds of Galecrest by Paolo Mori from Stonemaier Games. 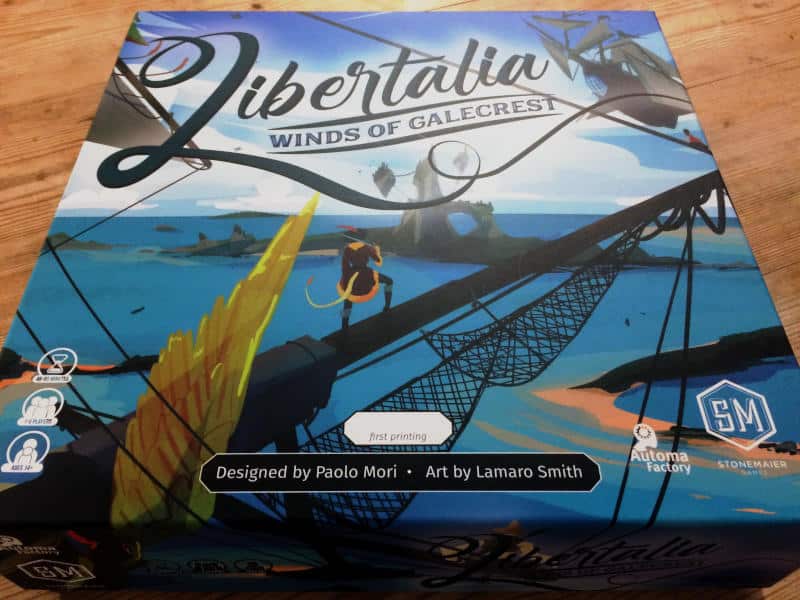 the box cover of Libertalia: Winds of Galecrest

Libertalia: Winds of Galecrest is based on another game. The original Libertalia was published in 2012 by Marabunta, but when the rights reverted back to the designer, Stonemaier Games contacted Paolo Mori to discuss creating a new edition. As the rulebook explains, Libertalia: Winds of Galecrest is “celebrating the foundations of the original design with a revised and expanded edition that includes all-new art, 40 characters per player, a reputation system to resolve tiebreakers, deluxe loot tokens, a robust solo mode, and much more.”

With the new edition, Stonemaier Games made a few important tweaks and improvements.

The biggest issue in the original game was what happened when two or more players simultaneously revealed the same character. The new edition resolves this really smoothly. There is a reputation track and you go earlier or later depending on your position. The new track doesn’t just deal with ties though. It also decides how many coins you gain each round. You can even affect your and other players’ position on the track with certain character cards. So reputation isn’t just a pasted-on mechanism to solve a specific problem, but it has become an additional and interesting element of the game.

The other thing that’s different between the two versions of the game is the loot tokens. Gone are the single-sided cardboard loot tokens and in their place are colourful double-sided bakelite ones. That means loot is no longer kept secret once it has been collected, which I think is a good idea. After all, everyone can see which tokens you draw. So if your memory is good, you’ll know who has what. However, because Libertalia: Winds of Galecrest isn’t a memory game, I don’t see any reason why people with bad memory should be at a disadvantage.

Drawing the heavy, plastic tiles from the double-stitched, sturdy bag when seeding the loot is such a delight. In fact, all of the components are really high quality. The card stock is really thick and comes with a lovely finish, which makes the cards easy to shuffle and hold in your hand. The gameboard is also thick and nicely finished and the score dials are just as good quality.

There are cardboard coins, which I never think are very nice to play with. I think that’s especially true in a pirate game. You definitely want metal coins and luckily, Stonemaier Games does offer metal doubloons as an add-on when you buy the game. I strongly recommend you buy these to add to the included high-quality components and raise your enjoyment of the game to the next level.

The rulebook is also of really high quality. Not just the paper, but also the way it’s laid out. The rules are pretty easy. If you want, you can read the whole rulebook for Libertalia: Winds of Galecrest and explain all the rules to everyone. However, I would recommend you read the setup steps and then just start playing, reading the relevant rules as you go through a round. Every card explains what it does, so it’s just a matter of reading what it says.

Once you played a couple of rounds, it’ll all make sense and when you get to the end of a journey, you learn a couple of extra things and you’ll see how scoring works. Then you might as well finish the learning game and you’ll be all set for next time. In fact, given that the game is probably over in about an hour, chances are that you can play another game straight away.

Libertalia: Winds of Galecrest is all about hand management. Everyone starts with the same hand of cards, which are randomly dealt from a deck of 40 characters. So everyone knows what everyone else has. The cards represent actions that you get to carry out at certain points in the round. You need to think about which card to play when, keeping in mind that it’s very possible that other players plan the same action as you.

It becomes a game of “I know that you know what I know that you know”. Maybe it’s best to give in and let another player have a good turn and keep the card for a future round. Of course, more often than not everyone else will have had the same thought, so none of you plays the powerful card that you had thought of playing. That means you have to make the same decision all over again in the next round.

What cards you play when will also depend on the loot that has been randomly chosen at the beginning of the round. The loot is shared amongst all players and there will be a mix of really useful tiles as well as terrible ones. So the pressure might be on to ensure you get an early pick, but again, everyone else will have that same pressure. Which card to play becomes an almost impossible decision and you just have to go with your guts.

Pirates of the High Winds

Libertalia: Winds of Galecrest is the sort of game that is more fun with more players. You want a group of people who are happy to get into character a little and who enjoy a bit of table talk. The rulebook doesn’t say so, but I think it’s important that players make temporary pacts and discuss what cards to play or which loot token they take. You really get the opportunity to let out your inner pirate and backstab other players.

No agreements will ever be binding, but it’s easily possible for two players to work together and stop a third from winning or at least stopping a runaway leader. If someone is about to collect their fourth map loot tile, then I think it’s absolutely fine to stab their crew member or push yourself to the top of the turn order, so that you can take the map for yourself. At the end of the day though, if you’re really mean to one player, they can easily get you back on another turn.

If your games group doesn’t like backstabbing, then don’t worry. Libertalia: Winds of Galecrest has three game modes. You can play the version where there is very little direct negative player interaction. If you prefer meanness, then set the game up where you basically have no choice but to really mess up other players. It’s really up to you.

Libertalia: Winds of Galecrest certainly has a lot of replayability. There are 40 characters to discover and these are selected at random every game. The loot also comes out randomly every time. So every game will be very different to the last. Characters that seemed very powerful in one game might actually be completely useless in another. I think that’s a hallmark of Stonemaier‘s games. There is a lot of luck involved, but you still feel like you’ve got agency and that your decisions are important.

So, if you’re after a game that’s easy to learn, allows you to do a bit of backstabbing and has a good mix of randomness and decision-making, then Libertalia: Winds of Galecrest is definitely for you.