A game about dancing sheep, rockets, lasers, cabbages and sometimes fun. I would like to add “death” to this list, but other than that, it’s pretty much a good description of 3 Minutes to Freedom (or Death) by Samuel Edmondson and Daniel Somerville Roberts from Icarus Games. 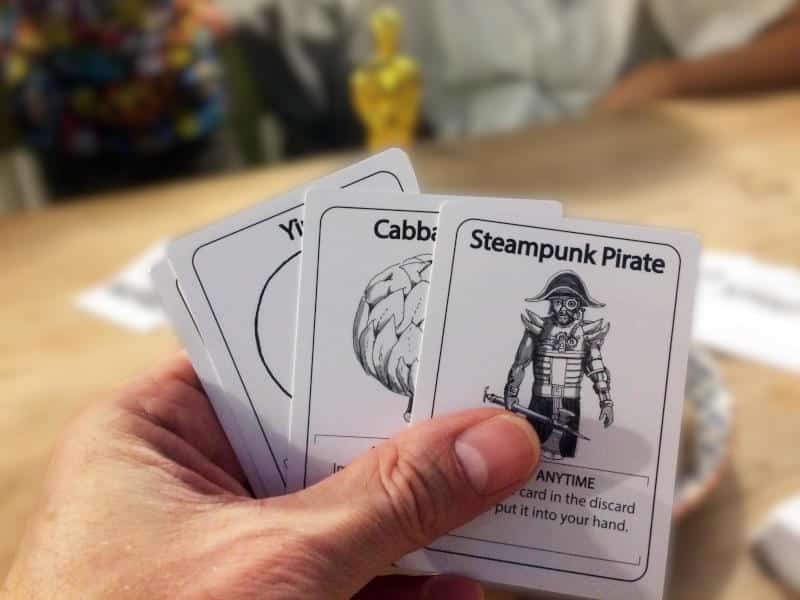 I know, the introduction sounds a bit weird, but then, that’s what this game is all about. Have a bit of fun with your friends or family and be the last person standing. 3 Minutes to Freedom (or Death) is in the vein of many other player-elimination games. It’s really quick to play, so that those people around the table who have been killed, don’t have to wait too long for the game to finish. I wouldn’t say a game only takes three minutes to play, like the title tries to suggest, but again, that’s not unusual for player-elimination games. Sometimes it takes only five minutes for everyone to have been killed, other times two or three players are still battling it out after 30 minutes.

3 Minutes to Freedom (or Death) is a card game where every card represents a certain action – or maybe a counter-action – or maybe no action at all. As you would expect, on your turn you draw a card and play a card from your hand. Sometimes you have to play the card you just drew, sometimes you can combine two cards and other times you can play a card even when it’s not your turn. Basically, just read what it says on the card and then decide if you have to do it straight away or otherwise, when it would be best to play this card.

There are plenty of cards that kill other players. That’s the aim of the game. Kill everyone else and be the last person alive. It doesn’t matter how many cards you’ve got left or what not. Just be alive as the last person around the table and you win.

To stop you from dying, there are plenty of cards that protect you. There are also plenty of cards that allow you to interfere with other players in other ways, allowing you to swap hands with them, forcing them to show you their hand or discard cards. You can even make other players speak in a silly voice or sing for the rest of the game. There are also plenty of useless cards and super powerful cards. It’s a really wonderful mix of different ways to affect the game and hopefully help you win.

It’s very much the sort of card game in the vein of Exploding Kittens or Fluxx, probably more like the former.

The game is really easy to explain and plays pretty quickly. If you play it for the first time, you will spend a bit of time reading each card, but it’s usually only a sentence or two. You will want to think about which cards to play when, but usually, you don’t have a lot of cards in hand, so it never takes long to make a decision. There should be no analysis paralysis in this game, except maybe when all of your cards are amazing, but none of them is right for the current situation.

The whole game is in black and white, probably to reduce the cost of production, but the art style is really clear and very imaginative. The little cartoony pictures really pop. It works and draws you into the game and will certainly be attractive to younger players.

There is one minor niggle for me, which is to do with product design. There is no thumb cut on the box and the lid is on very tight. So opening it is very, very difficult. You really have to prise it open. However, the game is basically just a deck of cards, so you can easily put it in another deck box if it’s an issue.

On the plus side, the box is just the right size for the game. There is basically no air, which is so great to see. There is also no plastic, except maybe the varnish on the cards, but it’s minimal. So here is another plus.

Overall though, if you want a quick, fun game of silliness then 3 Minutes to Freedom (or Death) is for you.