The irrigation system was ready, but there was still work to be done on the trellises. The windmill, cottage and tasting room were still just ruins and only the first third of the wine cellar was accessible. The crush pads were all clean and ready to receive the first harvest of grapes, yet the fields were still bare. Orders for some red and white wine had already come in and two types of grapes were ready to be planted. It was the beginning of a vineyard that was going to be splendid. Mama and Papa were looking forward to putting the work in and creating a heritage that would make the family name proud. At the same time, it was daunting, because they knew nothing about Viticulture by Stonemaier Games. 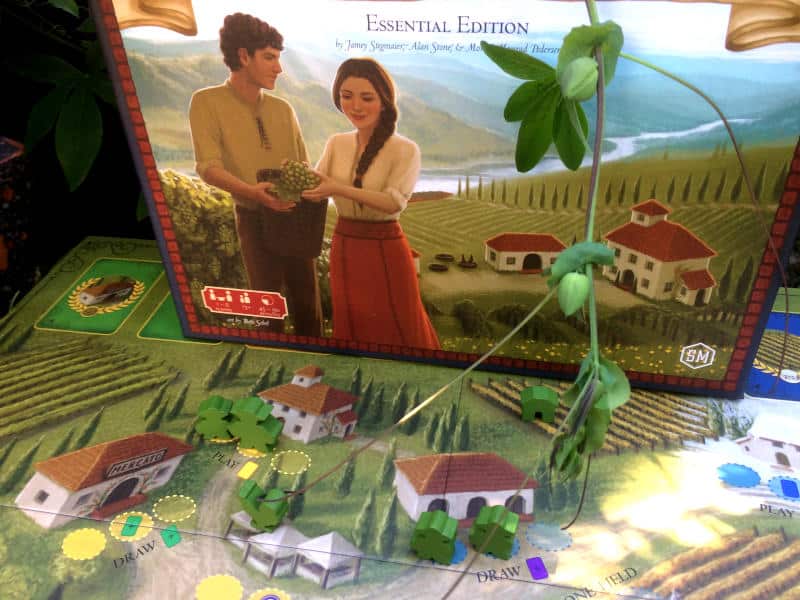 In fact, I don’t think you can buy the original Viticulture any longer, except in the second-hand market. So effectively, Vicitulture: Essential Edition has become the new Viticulture. However, I’ll bore you with all the details at the end of this article, if you’re interested.

So in Viticulture you’re trying to build up a new vineyard from scratch. You buy vines, plant them, harvest them, turn them into wine and sell the wine. You also need to build buildings and expand your wine cellar. At the beginning, you have three workers to do what’s needed, but you can, of course, get more during the game.

It’s the usual fare of worker placement with a limited amount of action spots, that can only be visited by a single worker, except for your so-called grande worker, who can basically go anywhere. You also have a hand of cards, that you need to discard down to seven at the end of a round, that represent the vines you can plant, the wine orders you’re trying to fulfil as well as some one-off actions, which are represented by so-called visitor cards.

There isn’t really anything new or different so far. That’s not surprising, of course, because the game is now five years old and we have seen many similar games before and since.

So, just like in many other worker placement games, the worker spots allow for blocking of other players, but with your grande worker, it’s usually not too bad. So that alone doesn’t create a huge amount of player interaction.

The visitor cards are a different matter though. Some allow you to directly affect other players, forcing them to give you their own cards, wine from their cellar or lose victory points. It creates a much more direct type of player interaction, which is very aggressive, but at the same time, these cards are limited. Most visitor cards really only affect what you can do or give you benefits, while a handful actually give other players benefits too.

So, overall, the level of player interaction is relatively low.

As I say, so far the game behaves pretty much like other worker placement games. There are a number of differences in Viticulture though that make it much more interesting than in other games and which attracted me to the game in the first place.

First of all, the game ends when someone has reached twenty victory points. However, it’s not an immediate end, like in Scythe, but the round is played out. So unless you’re the last player in the round, other players get the opportunity to overtake you, because it’s not the first player to reach twenty victory points who wins, but the player with the most victory points at the end. So you do have to make sure you’re far enough in the lead to win, or you might be better off to keep your victory score where it is to give yourself another round.

It’s an interesting decision to make and it’s something I love in Scythe. Triggering the end game isn’t a guaranteed victory. Yet, while Scythe is very brutal when it comes to the game end, Viticulture is a lot more gentle and chances are, if you’re not going to get a big enough lead this round, you probably won’t get it next round either. It really becomes a non-decision unfortunately, because if you don’t trigger the end this round, someone else will do so next round and you won’t have enough time to catch up – so you might as well trigger the game end this round yourself and hope for the best.

The other interesting decision you make in Viticulture is about turn order. At the beginning of each round, the first player token goes round in clockwise order, so that everyone gets a turn to be first player. However, being first player doesn’t mean you will take your actions first this round, because at the beginning of every round players decide to take a bonus from a set of seven different benefits.

The seven benefits are ranked 1 to 7, which represents the actual turn order for the following round. So you can choose the first bonus to ensure you go first this round, but the first bonus is actually no bonus at all, giving you nothing. The remaining bonuses are ordered by how valuable they are, so the seventh bonus is the most valuable, giving you an extra worker, but it means you will definitely go last this round.

Again, it’s a very interesting decision, but unfortunately, once more it doesn’t seem to have a huge impact on the game, because player interaction is so low. You’d think that you’d always want to go first in a round, so that you can place your worker on that crucial action spot that you so desperately need. However, even when you go last, you can always use your grande worker to get the action you want, even if someone else got there before you.

There is one more interesting mechanism though and that is that each round is divided into four phases. A round is basically a year and the four phases are the four seasons, spring, summer, fall and winter. In spring you choose which of the seven bonuses you want, based on the current player order. In summer you place your workers on the available summer worker spots, based on the turn order decided via the spring bonuses. In fall you draw a visitor card, which will hopefully give you a great one-off action. In winter you place your remaining workers, if any, on the winter worker spots.

It’s the division of worker spaces into summer and winter that I think makes Viticulture so interesting. You only have so many workers, which are already not enough to allow you to do everything you want, but you also have to decide how many you use in summer and how many in winter, because when you place your workers, they’re locked up until the end of the year.

So you can decide to use them all in summer, which is often what happens at the beginning of the game, or all in winter, which is more common near the end of the game – or a combination of both. It forces you to really think ahead and carefully work out what you want to do and how to achieve that.

It’s that division and the interdependence of actions that create the need for a strategy in the game. Yes, you also need tactics as you respond to where others place their workers, but the overall plan is the real driving factor in the game.

Yet, there is also a lot of luck in Viticulture, like there is in so many of Stonemaier‘s games and it’s all in the cards. You can be very lucky to get all the grapes that you can grow without building any buildings, which will save you a good few actions, allowing you to fulfil orders more quickly than others. You can also be very lucky and get some amazing visitors that give you great benefits or really interfere with the other players. You can also be very lucky and get just the right orders for the wines you have in your cellar.

It seems vitally important to get as many cards as possible in Viticulture to give you the most opportunities and also reduce the impact of luck, because the more cards you draw, the more the luck factor will even out. However, you can’t just keep taking cards, because there are only so many worker spots for that, but also because of your hand limit of seven cards, which luckily only applies at the end of the round. So if you’re clever, you draw a lot of cards and play a lot of cards every round.

You can’t neglect your vineyard though, so you still have to take care of planting vines, harvesting grapes and make wine. That’s also very important, but at the same time it does feel like the cards are more important.

There are a couple more interesting mechanisms in Viticulture that I want to mention. One is that you can have negative victory points. Some visitor cards allow you to spend victory points to get benefits, which is often worth it. In a similar vein is the option of selling your vine fields, which gives you an immediate cash injection to allow you to invest in new workers and buildings. It seems another thing you probably should do straight away.

The good thing is, the victory points you spend and the fields you sell aren’t gone forever of course. You gain victory points during the game and you can buy your fields back for the same price that you sold them at, so you don’t lose anything.

So overall Viticulture is a good game, but of course it shows its age now. I would say there are more interesting and challenging worker placement games out there that add different mechanisms. Yet, if you can get Viticulture: Essential Edition for a good price, it’s still a worthwhile addition to your collection. After all, it’s a game that Stonemaier are famous for and many people still love it. I also enjoy playing it and so does my games group, which is a good sign.

So, before I finish, let me tell you a bit about the history of the game. Feel free to skip this bit, of course, if you’re not interested.

So Stonemaier Games decided to incorporate some of the main parts from the Tuscany expansion into the core game, thereby creating Viticulture: Essential Edition. If you buy that version you get a better game experience from the get-go and don’t need the expansion. However, if you still want everything that Tuscany has to offer, you can buy the Tuscany Upgrade Pack.

I don’t think the publisher offers the original Viticulture any longer, which makes sense. So if you want that, you need to look on the second-hand market.