A great fire engulfed the Whelming Matches factory. All the water in the world couldn’t put it out, so hot it burned. When the flames eventually died down many hours later, one artefact was found among the glowing embers. It was cold to the touch and nobody knew what it was. Maybe it was one of the Matches by Daniel McKinley from Thing 12 Games. 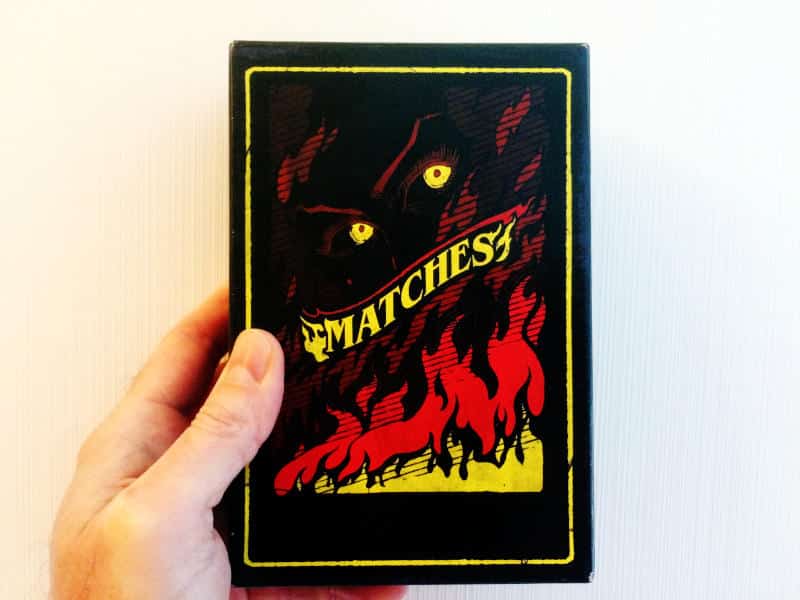 Wow! What a story to set the scene! The whole game is dedicated to the topic of matches. The game box looks like an oversized matchbox, there are flame tokens to keep track of points, a first-player marker of a match and the cards have a certain number of matches on one side and a fiery illustration on their backs. You start to feel a bit hot under the collar just setting up the game.

I also think that the title, Matches, is a play on words. Yes, of course, it goes with the story and the setting, but it can also refer to the idea that you are playing four rounds and whoever has the most points at the end wins the match. In fact, the game is so quick, you probably want to play it several times. So you end up playing several “matches”, if you see what I mean.

Matches is presented as a trick-taking style game. Even though that’s probably what people will first think of when they learn the rules, I would say it’s not a trick-taking game at all. It reminds me more of a set-collection game mixed with a last-player-standing mechanism. You either get points for each pair of cards with the same value or by being the last player who didn’t pass. So you don’t win a trick as such and you certainly don’t take the cards played to show that you won.

At the same time, there is a feeling of trick-taking, because everyone starts with a hand of cards and one player starts the round by playing a single card from their hand. Everyone else now has to play one or more cards from their hand whose values add up to that of the card that the lead player put in the middle of the table.

So it feels a bit like the first player decides the suit that everyone has to follow, except that it’s a number rather than a colour or actual suit. Unlike real trick-taking games though, everyone can play more than just one card and you don’t just go around the table once, but keep going until every player, except one, has passed. That means Matches is definitely not a trick-taking game, but that’s not a bad thing. In fact, it’s a good thing, because it’s the sort of game that you have to play several times to get better at it.

When you first play, you think it’s all about playing as many cards as possible to get lots of points. After all, if you play a single card that matches the middle card, a flame token is added to the pot of points in the middle. Whoever wins the round, i.e. whoever is the last player standing, gets that pot of points. Everyone else gets one point for every pair of cards with the same value. So if you played two 1s, three 2s and four 7s, you get four points: one for the pair of 1s, one for two of the three 2s and two points for the two pairs of 7s.

Often the pot of points in the middle is bigger than the points other players get from their pairs. However, if you play well, you never play a single card, therefore preventing the pool of flame tokens in the middle from increasing. Instead, you focus on playing as many pairs as possible.

At the same time, if you think you can do it, you will try to play lots of single cards and grow the fire in the centre and be the last player standing, so that you can collect lots of points. If the other players around the table pay attention, they will stop you by simply passing early. If they can time it right, they will still have a pair or two in front of them to score, but have stopped you from collecting too many flame tokens for yourself.

That’s actually a tie-in to the setting. People don’t want the fire in the middle of the table to spread, unless you’re the firestarter so to speak. You want the flames to grow higher and higher.

The more you play, the more you realize what a good hand is, learn when to pass intentionally and even know when to pass straight away, just so that you have a great hand in the next round. It’s really wonderful to watch and is one of the things that’s so nice about this game. You and the people you play with learn the game together.

The rules are really quite simple, so it’s really easy to teach. Yet, it will take a lot longer to become a master at Matches. You will try various strategies and everyone around the table will do the same. When you think you’ve cracked it, someone else will have found a way to stop you. It’s a lot of fun.

At the same time, there is a good amount of luck involved. It’s a card game after all. What you can and can’t do will depend on the hand you’ve been dealt. That doesn’t mean there is actually a bad hand as such, but even if you don’t like the cards you’ve got, you can just pass and hope for better cards next round.

Actually, it’s not even as black and white as that. At the end of a round, you can decide which of the cards you didn’t play you want to keep. So you can pick the best ones and then get dealt new cards that are hopefully a better match. Also, the first player to pass gets a consolation point and will be the first player in the next round. That’s really quite tempting, because it means you can play the card that will score you the most points.

Matches is really a lot of fun and the sort of game that you can play with a wide variety of people. It goes up to six players, which is amazing and the rules are really simple. It takes about half an hour to play, at the most, depending on player count. It’s a deck of cards and some tokens, which are easy to take with you. It doesn’t take up much space on the table either, making it ideal for the pub or small side table. So, yes, it does tick a lot of boxes.

If you ever get bored with the basic rules, you can add in the so-called “burn cards”, to get some more variety. Personally though, I love just the basic game and have played it about a dozen times already. It’s a favourite among my family now and I can highly recommend it.