It was soon time for the most anticipated festival at Death School, whose motto was “Soul to win”. According to legend, there was an accident at the school many years ago. Somehow numerous souls had been able to escape, and the teachers and students raced to recapture them all. Every year hence, Papa Death, Osiris, Hei and Bai Wuchang lead the students into a race of reaping souls, the Soulaween by Shi Chen from Play With Us Design. 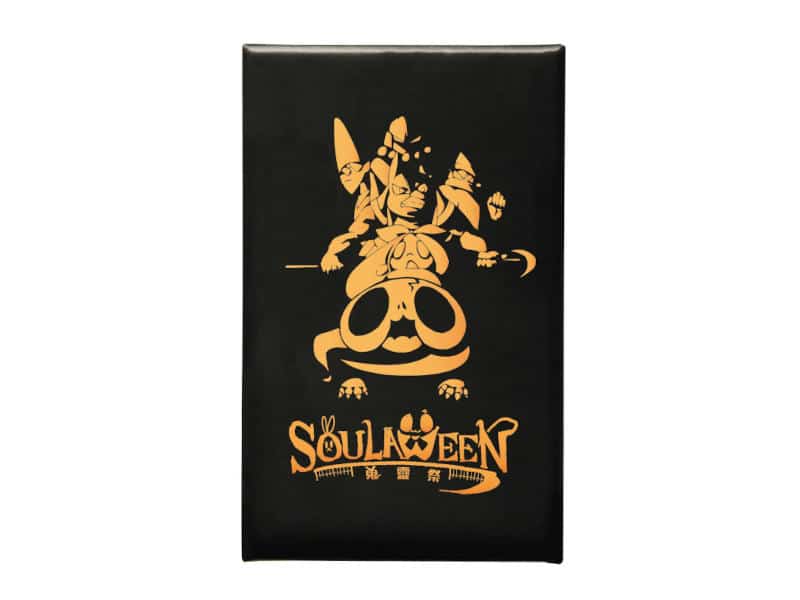 the Soulaween box art (Photo courtesy of Play With Us Design)

The introduction to this two-player-only, rather brain-burnery, abstract game sounds a little bit over the top, but there is a reason for it. There is an animation by a group of Taiwanese college students they made back in 2013. The group calls themselves Deahtigner, which is clearly a contraction of “death” and “designer”. So when the publisher of Soulaween saw the animation a few years later, they really liked the story it told. They contacted the director and illustrator of the animation and asked if they could make a game out of it – and that game is Soulaween. In return, Deathigner‘s director, Tzuhsuan Fei, drew a short comic about Soulaween.

I think that’s a lovely story and a great way of linking an abstract game to a setting.

When you first look at Soulaween you will be reminded of draughts, or checkers as it’s called in North America. There are a four-by-four grid and round, wooden counters, each with a red and a green side. On your turn, you take one of the counters and place it anywhere on the grid. You then flip all orthogonally adjacent counters to their opposite side.

Rather than draughts, Soulaween actually reminds me a lot more of Nine Men’s Morris, or Mühle as it’s called in German. It’s all about cleverly placing counters to flip adjacent ones and create a row, column or diagonal line of four pieces of the same colour. If you achieve that, you remove the four discs and gain a point. Reach three points to win the game.

The rules are really simple, but you have to play Soulaween a lot to master it. That’s a sign of a great abstract game. Your first couple of turns seem simple enough, but very quickly you realize that you have to be careful where you place counters. You don’t want to leave an opening for your opponent.

The more you play, the better you get at forcing your opponent to play so that you can score on your next turn. However, your opponent will also learn and soon games take longer and longer. It becomes a real battle of wits at that point and if you have a good eye for patterns, your chances of winning will definitely be higher.

You will get to situations where you score a row of four and then your opponent places their tile to score a column of four, which might even then give you the opportunity to score again. You can set up long scoring chains and games become tighter and tighter.

Soulaween comes with a number of variations that affect counter placement, scoring as well as how to flip discs. These variations are implemented in the form of characters. In your first game, you probably want to play with the basic characters, but in subsequent games, each player can choose a different character.

So there is plenty of variety, especially because you can endlessly combine the available characters, either allowing players to specifically choose one each or just randomly handing them out.

The game comes in a small box, about the size of two to three decks of cards, which means it’s easy to fit into a coat pocket or handbag. The board is a screen-printed cloth, which feels lovely and silky. It fits perfectly into the box, if you fold it a couple of times, which is a clever way of solving the problem of games having to come in big boxes, because of the size of the board.

The counters are all wooden, but feel a lot lighter than I would have expected. I assume it’s less dense wood or maybe some sort of MDF. However, they don’t feel cheap and both sides are screen-printed, one with a green soul and the other with a red one.

Despite the colours being green and red, I don’t think colourblind people will have a problem. The green is quite light and the red is relatively dark, which should make them easy to distinguish. If that doesn’t work for you, then there is another way to tell the counters apart. On one side the soul faces to the left while on the other it faces to the right and they look slightly different as well. So as long as you orient all of the tokens the same way, you should be able to tell the difference pretty easily.

The game doesn’t really take that long to play, even once you’ve gotten better at it. It’s ideal for two of you to play during a lunch break or maybe while you wait for the rest of your games group to arrive. It’s so very quick to set up and teach that nobody should be put off giving it a go. Once you start playing, you’ll get hooked and want to play just one more game – and then another – and another.