The Nostromo was returning to Earth with a seven-member crew in stasis. Detecting a transmission from a nearby moon, the ship’s computer awakens the crew and they land on the moon. While one part of the crew tracks down the source of the signal, the rest decipher part of the transmission and discover it’s a warning – but it’s too late! Despite protestations, the returning crew brings with them an Alien: Fate of the Nostromo by Scott Rogers from Ravensburger. 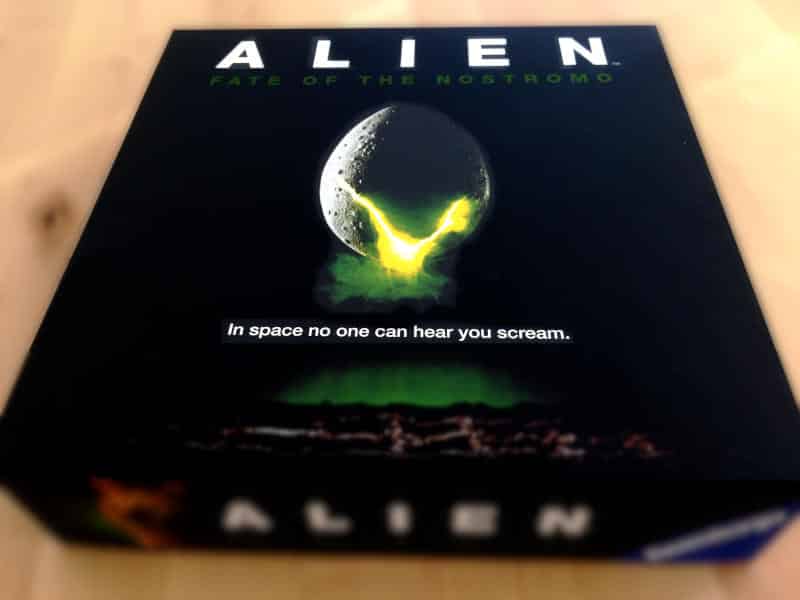 If you haven’t yet watched the 1979 horror film directed by Ridley Scott, then none of this will make any sense to you. You’re not the target audience for this cooperative game where the crew of Nostromo try to survive and kill the deadly intruder that is hunting them down and killing them one by one. In the film, there are only two survivors: warrant officer Ripley and the ship’s cat. So don’t expect to make it to the end of this game. Your odds are low – but your life is on the line, so not doing anything isn’t an option.

A Cheap Alien It Is Not…

Whenever you think of Ravensburger, you think of family games that are light on rules and usually not very challenging. You would also expect the juggernaut of the German board game industry to simply try and make a quick buck out of a well-known IP, such as the Alien franchise. However, that has changed quite a bit in the last couple of years.

Back to the Future: Dice Through Time was the first of the new line-up of Ravensburger games I came across that used a big IP as its setting. The component quality was great, of course, as you would expect from a big publisher like this one. There were thick cardboard tokens and game and player boards, as well as highly detailed miniature plastic DeLoreans. However, I was really surprised by how well put together and challenging the game was. The rules complexity was higher than I would have anticipated and it kept us busy for quite some time. Of course, given the trio of designers behind it, Chris Leder, Ken Franklin and Kevin Rodgers, it should have been obvious that this would be a good game.

Alien: Fate of the Nostromo is no different. The designer, Scott Rogers, is well-known and established, having produced a wide range of great games. So there is a lot in this game that you can get your teeth stuck in. The component quality is also really good again, coming with plastic miniatures of the crew of the spaceship and the Alien. Maybe these are a little flimsy and could have been a bit more solid, but they certainly look good on the table.

In Space, Nobody Can Hear You Scream

The gameplay is very much like many other co-operative games. Everyone has their own little objectives to complete, but you can help each other. You can share items if you’re on the same space and some characters have special abilities that can be useful to the team. You all basically move around the ship, as quietly as possible, collect items, craft them into other items, defend against Alien attacks and ultimately try to complete your objectives.

Whether or not you get attacked is based on a card draw, which makes the Alien move towards the closest crew mate, as well as certain tokens that are strewn around the ship, which can lead to surprise attacks. Rather than each crew member having a certain amount of health, it’s all about the whole team’s morale. So, the Alien doesn’t kill anyone. Instead, it terrorizes everyone and if it gets too much for all of you, you lose. That also means that, if you win, you all survive, which is much better than what happened in the film, of course.

To make things even harder, not only do all of you have objectives, but once these are all ticked off, the whole crew has to face two more tasks. The final mission will push you to the limit and you have to work even more closely together to complete it successfully before you lose all of your morale. So while before you were more focussed on yourself and what you had to achieve, only helping each other from time to time, now it’s definitely all about the team.

As always, this sort of game depends on who you play with. Alien: Fate of the Nostromo is no different to other co-operative games when it comes to alpha players or quarterbacking. All of the information is public, so it’s easy for someone to point out the optimum actions everyone should carry out. You, as a group, just have to make sure you either have no alpha player at the table or put them in their place.

If you have a good group though and maybe someone who loves the films and who will play a fitting soundtrack as you try and make it out alive, you will have a great time. There are a lot of great details and nods to the film. You can even have Ash in the mix to create more distractions for you, if the Alien alone isn’t enough of a challenge.

The only niggle I have with the game is that it sometimes does feel a bit mechanical. You do your actions, draw a card, move the alien, take damage and then it’s the next player’s turn. You have to make a bit of an effort and actively immerse yourself in the setting. There are no jump scares, even though Jonesy does sometimes appear out of nowhere and saps your morale. There is no feeling of claustrophobia. It’s not dark, damp and dingy.

However, as a co-operative experience, it ticks all the boxes for sure. I also really enjoyed it as a solo experience, which is unlike me. I usually don’t play games alone, especially not scary ones. So don’t go in expecting to play the game and come out sweaty and a nervous wreck. It’s a really good co-operative puzzle that is different every time. It’ll keep you entertained for a fair amount of time and is the sort of game you will want to keep in your collection and get out ever so often.