Natural resources had long been depleted on Earth, but the asteroid belt was rich in ion and ore. The battle for control of these invaluable commodities had begun. We were part of this fight and were operating from our own Outpost 18 by Adam Wilk. 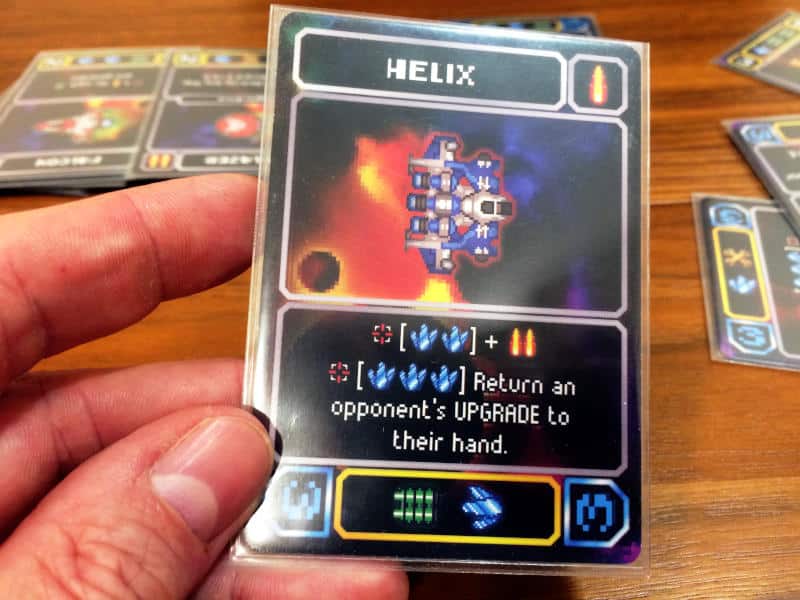 one of the dual-function cards in Outpost 18

I love wallet-sized games and this lovely 18-card two-player only battling game a la Star Realms is right up there with the best. It’s even available for free as a print-and-play on PNPArcade which makes this game even more of a no-brainer – but let me start at the beginning.

In Outpost 18, two players battle it out to destroy the opponent’s base station, or to be more precise, their station core. Of course, both players do their best to protect themselves by playing cards as shields, which usually also generate resources or give you extra draws and other bonuses. It’s not just about defending your base, because then the game would never end. You also need to build ships and lead them on attack runs that will destroy the enemy’s shields and eventually allow you to destroy their station.

The question is, how it is possible to make all of this happen with a deck of 18 cards. The answer is quite simple. Every card has two functions. It can either be used as an upgrade, such as a shield, or it can be used as a ship. Suddenly, it’s more like you have 36 cards at your disposal. Mind you, there are actually only 16 cards in play, because two are used for the players’ stations. Even so, 16 cards with dual function give you a choice of 32 different options.

That still doesn’t sound like a lot if you compare it to something like Star Realms, which comes with dozens of cards in the base game and can be almost endlessly expanded with additional packs. Yet, the compact deck size of Outpost 18 does create a huge amount of variety and the way different cards give you different bonuses allow for many different combinations and therefore different strategies.

At the same time, cards go from draw deck to hand to player tableau to discard pile quite a lot. You rarely build up a large number of cards in front of you. Your opponent won’t allow you to build up too many shields or upgrades, but attack them frequently, after which they are discarded. Additionally, when you attack with your ships, they get discarded afterwards, further increasing the cycling of cards throughout the game.

As a result, powerful cards in the hands of your opponent won’t take long to make their way into the discard pile and eventually back into a freshly shuffled draw deck, making them available for you to get. It, therefore, behoves players to try and increase the number of cards they can draw on their turn, so they have more opportunities to get hold of those valuable cards quickly.

The relatively small deck and the quick cycling out of cards really focuses your mind. You have to make every card count. You can’t just randomly launch an attack, but need to balance the number of bonuses you get from your upgrades to increase the force of your ships’ power with the need to keep the opponent’s station upgrades and specifically their shields low.

What is also really impressive and something that Outpost 18 does really well is create a sense of urgency. Games don’t take long to play and as quickly as you’ve built up a powerful station and a huge armada of ships, you will lose everything as well. The power balance between players constantly shifts, almost every turn.

Outpost 18 really surprises you with how much it achieves. The fact that there are only 18 cards is by no means a limitation. At first glance, you would expect a relatively limited amount of replayability and fun, but the game experience is deep and exciting. You come out of a game wanting to play again, hoping for a better card draw and aiming to try out a different strategy.

There is certainly a lot more “pew, pew, pew!” in this game than in others with larger deck sizes and more complicated rules. The more you play it, the better you get to know the cards, as you would expect, but you also get better at timing your attacks and deciding when to build up shields and upgrades.

I was really pleasantly surprised by Outpost 18. I like wallet games and know how much gameplay a small deck of cards can create, but this game seems to take it to another level. As a deck of cards, it is really easy to have with you and it doesn’t take up much space on the table either, making it the ideal game to play on trains, planes or buses. You don’t even need health counters or other components. The deck of cards is all you need to have a great two-player space battle experience.