The game, it’s a test of sorts, for determining whether something is a machine or a human being. There’s a judge and a subject. The judge asks questions and based on the subject’s answers they determine who they are speaking with – what they are speaking with. All you have to do is ask a question. So, now it’s your turn to ask Turing by Glenn Ford from Man O’ Kent Games. 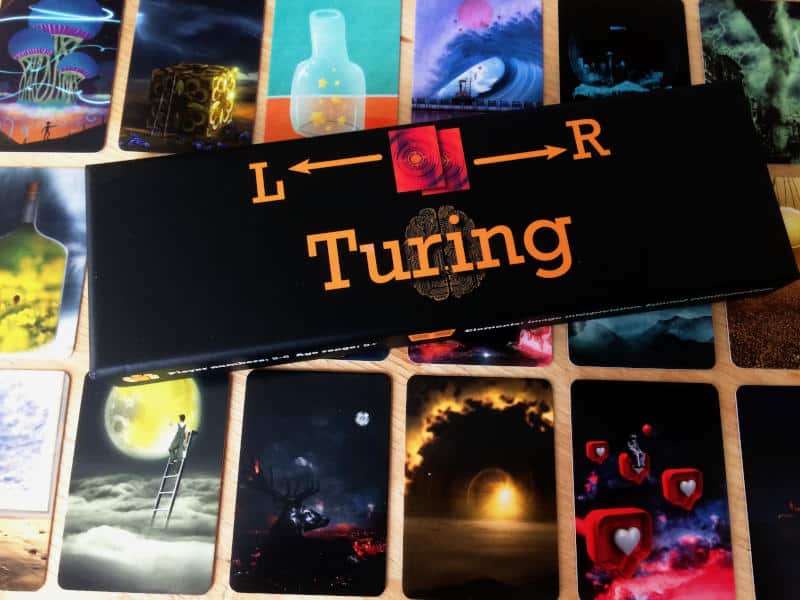 I felt using the description of the Turing Test that is given by Alan Turing as played by Benedict Cumberbatch in the film The Imitation Game is really fitting. It’s probably one of the best explanations there is, outlining the way Turing suggested that we check if a machine is indistinguishable from a person. The test never really goes as far as saying that it can prove that a machine thinks just like a human being does. It just evaluates if a machine is good enough to fool a person into thinking that they are communicating with a person.

The card game Turing has the test at its core. Rather than having a single judge, the game can have multiple interrogators, as it calls them. The subject from the test is called the responder in the game. Instead of asking questions, there is an abstract image laid out on the table for everyone to see. The responder’s job is to play the role of a person as well as that of a machine. They draw four abstract image cards and keep them hidden.

At the start of the game, the responder will have randomly chosen whether the machine chooses the leftmost or rightmost of these four cards as its response, while they secretly choose one of the other three images as the human being’s choice. They then play the machine’s and their chosen card face up in two columns, one representing left, the other right. They then discard the remaining two cards face down.

The interrogators can now choose one of the played cards as the machine’s choice or they can delay their decision to the next round or even the round after. However, all of the interrogators have to make a choice in the third round at the latest.

If you’re playing co-operatively, the responder will do their best to select cards that somehow indicate to the interrogators that they’re a human being. That could be by matching their choice to the abstract image played at the beginning or maybe by trying to play three cards that have a similar colour theme or setting. It’s really up to the responder to find a way of showing everyone that they’re definitely a person and not the machine.

The problem is, that their options aren’t always helpful. Sometimes you draw four cards, one of which is the perfect match, but the machine is the one to select it. You’re left with three cards that bear little resemblance to the starter image. Whichever card you choose, everyone else will think that’s the machine’s card and not a thinking person’s.

Of course, if you’re playing competitively, that’s perfect. Your aim as the responder is to confuse the interrogators and make them think that you’re the machine. So really terrible cards will be in your favour in this case. However, you might also draw cards that are really good matches, of course.

You all take turns to be the responder once when you play Turing. So everyone gets their chance to play three sets of two cards and try to either prove you’re human in co-op mode or to pretend you’re the machine if playing competitively. So everyone gets a taste of how random card draws can really mess up with your goal and how hard it can be to try and win the game.

Unfortunately, I found the rules for Turing too difficult to understand. Luckily, there is a rules teach video which makes everything a lot clearer. Don’t get me wrong, the rules cover everything and there are a lot of illustrations to help you understand what needs to be done. I guess, I’m a very visual person and the illustrations weren’t enough for me. As I say, watch the video and everything will make perfect sense.

I played the game a few times with my wife. Even though you can play it two-player, it’s going to be a lot more fun when you play with more people. A larger player count will also allow for bad card luck to even out a little, which felt a little unfair at times when playing just the two of us.

Hiding which card you choose on behalf of the machine and which one as the person isn’t easy. I love that the box of the game doubles up as a shield. You can hide your cards behind it, but it’s a little small. It’s relatively easy for others to see when you choose a card from the far left or the far right, which is going to be the machine’s card in 99% of cases. I think you might want to either find a bigger screen or maybe choose your cards under the table.

Turing is a lot of fun at larger player counts. Suddenly the element of group dynamics, of herd mentality kicks in. You’re really all just making your own choice as interrogators as to whether the left or the right card is the machine. You’re not supposed to talk really and the responder certainly isn’t allowed to give any clues. In reality though, you do start talking and responding to the cards played.

In fact, I think it’s the social element that makes Turing a lot of fun. When you play co-operatively, you discuss which card you think is the right one or whether you should wait another turn. Of course, everyone knows that the longer you delay your choice of card, the fewer points you will get. So you do want to come to a conclusion early on and some of you will just make a choice, while others will take more time.

When you play competitively, everyone will try to convince everyone else to choose the wrong card, of course. It’s just glorious.

What’s also great about Turing is its length and the player count. It’s really short and can be played with up to six players and in theory with even more. So even when you play the game with the maximum people, it won’t take long to play a whole game. Once you understand the rules, it’s also not hard to teach and understand. So it’s the perfect game that you can quickly set up and play with a group of people. Play it once before the “main game” or play it several times. It’s up to you.

If you ever want to pit yourself against the wits of a machine, then Turing is the perfect choice.