I know this is a First World problem, but I currently have a number of games sitting on my shelves that I haven’t played yet. I also know that I’m not the only one with a “shelf of opportunity” that seems to be growing, rather than shrinking. I basically have too many board games. It seems to be something that’s quite common in the board game hobby. In this article, I want to look at a number of reasons why my game pile has increased, rather than gotten smaller. 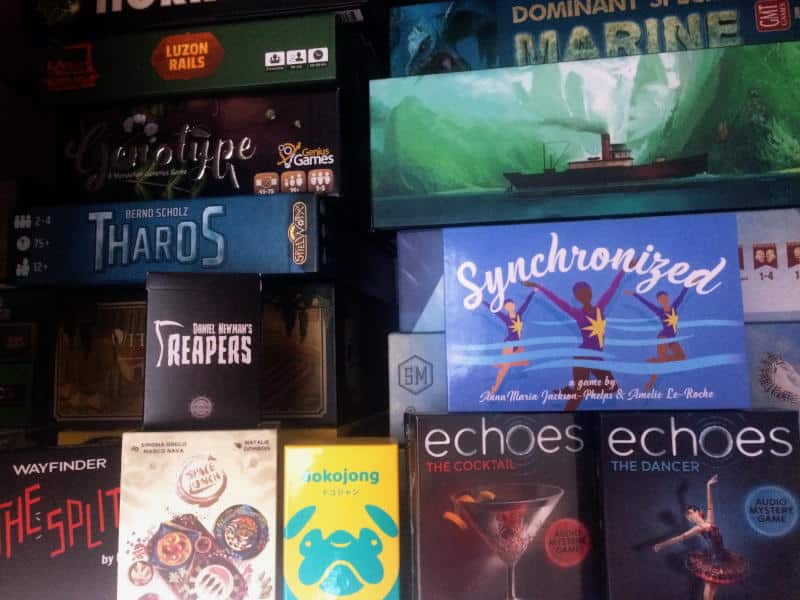 Let me start with the obvious: I’ve been backing quite a few games on the various crowdfunding platforms. These games are now being fulfilled and therefore the stack of unplayed games is growing. I think that’s true for a lot of us. The lure of a glitzy crowdfunding campaign with exclusive components is very powerful. The feeling of helping someone make their dream a reality is wonderful. It’s also very hard to resist the pull of lots of people on social media singing the latest campaign’s praises. The fear of missing out can be very strong.

However, I’ve now made a decision to only back campaigns from smaller, independent publishers or self-publishers and show them my support. Other than that, I’ll only be backing games that do something new, something different, that I’ve not seen in other games before. That used to be my aim anyway, finding a game with a new mechanism or that somehow uses existing mechanisms in a new way. So I’m going back to that, which will help.

The other main reason why I’ve now got more games than I can play is the lockdown, of course. It’s not only me who has been backing crowdfunding campaigns. My friends did the same. So where we would normally have had time to meet up and play those games, the lockdown prevented us from doing so. It’s hard to say exactly, but I think we lost about 2 years. It’s no surprise that I now have too many board games.

While we were unable to meet in person, we played a lot online (quick hello to Jamie Adams from the Brainwaves board game news podcast at this point). We learned a lot of new games. So I was able to continue writing reviews, be it for digital versions of board games rather than physical games. However, we didn’t get time to play the games we were getting in the post.

When the lockdown was over and we were happy to meet up in person again, everyone wanted to play their game first. My friend’s copies of Oath, Root and Dwellings of Eldervale got played. At the same time, my copies of Brass: Birmingham and Die Macher stayed on the shelf. Mind you, we did get to play Brass: Birmingham digitally. So, it’s not too bad, but then it would have been nice to play with the Iron Clay poker chips.

It was great that my wife played games with me that I could review, but that only got rid of games that could be played with two players. A lot of the games I buy are for more than just two, or at least they are more fun at a higher player count.

It also didn’t help that publishers started to send me review copies of their games. Previously, I only had received a small handful of review copies. So as that number went up, my pile of unplayed games didn’t go down. After all, you want to play a publisher’s review copy first. You want to show them that their trust in you is justified. My games group and my wife were really wonderful. They helped me get those games played, so that I could review them. I’m deeply in their debt for that.

So while I’m really grateful that publishers are happy to send me their games for free, it does also put pressure on me to get them played. I’m not complaining though. I’ve chosen to become a board game reviewer. It’s a responsibility that I happily take on. However, it does illustrate why I still have too many board games.

There is another reason why I’m not playing more games these days. That’s because I now tend to play the same games more often. When previously I might play a game maybe three or four times, before moving on to the next, I now often play a game five to ten times. That’s especially true for shorter games, of course. However, even longer games now get to the table more frequently.

So while playing We Can Play 20 times in a week is easy, getting Oath to the table once a week for three consecutive weeks is a lot harder. Yet, that’s exactly what we did. We were able to start a little Oath campaign and see how the game evolves. Similarly, I’ve now played Root over five times.

Playing the same game multiple times means you don’t get to the next game as quickly. So that’s another reason why I still have too many board games, or at least I have more games than I can play.

As I mentioned earlier though, things are changing. I’m now buying fewer games, be it via crowdfunding or directly from a store. I’m more focussed on finding games that are different to those I have previously played. It’s a lot more about curating my collection now. I don’t want to have two games that basically do the same thing or that create the same experience. If that’s the case, I get rid of one and therefore shrink my collection.

That doesn’t directly affect the many games I haven’t played yet, but it means it will slowly change in the future. I am determined to play the majority of unplayed games. So I have to make sure I have the time to do so.

I also have to make sure I only buy games that I’m pretty confident are a good fit for the people I play with. I’ve recently increased the number of lighter games, that I know I can play with the wider family. I also focussed a bit more on two-player only games, which I will be able to play with my wife. The number of heavier games hasn’t gone up though. That allows me to play each heavier game multiple times with my games group, so we get the most out of them.

So how about you? Do you have more games than you need? Do you have an ever-increasing pile of games that you know you probably won’t get played? What do you do to reduce that pile? Or do you not care, because for you just owning games is important? Are you more of a collector maybe? As always, please share your thoughts and experiences with me. Just post them in the comments below. I wonder if you also have too many board games, like me.