There was darkness everywhere. The surface of the Earth was empty and cold. There was no noise, nothing stirred or moved. It was an arid place, void of everything – a blank canvas – but you would change all that. You would command the energies of the Earth and mould lifeless piles of mud into creatures that would populate the world. It was the time of the Golems by ThunderGryph Games. 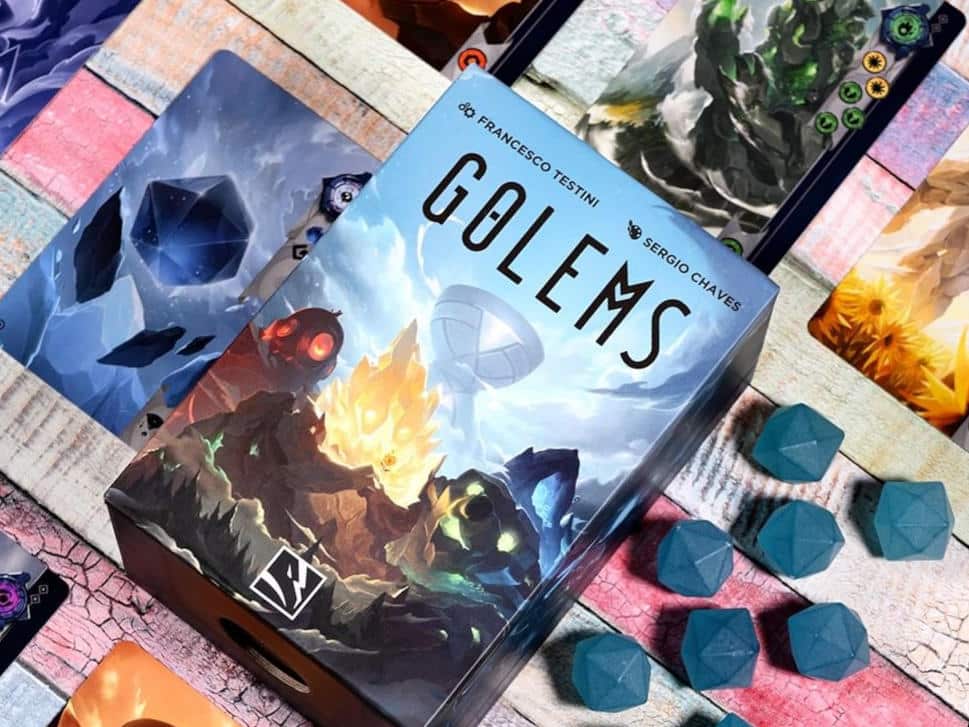 Here is the fourth game in the Matchbox Collection that I’m reviewing and yet again it’s a wonderfully small box containing a deck of cards and a fistful of unpolished plastic gems. I assume the gems are unpolished, because it’s your task to use gems and different resources to forge golems. You turn the empty Earth into a world inhabited by mystical creatures.

Sure, the setting is fascinating, the deck of 52 cards is beautifully illustrated with evocative depictions of the golems, gems and a number of runes and the 13 plastic gems are really quite chunky and tactile, but the important question is if the gameplay lives up to what the components promise. After all, great quality components are no good if the game itself disappoints.

In Golems, every card fulfils at least two functions: it either represents one or two resources or it represents a golem, rune or gem, the latter two having some additional benefits. Ultimately, your aim is to draw cards and store them in front of you as resources until you have enough to summon a golem, which means you take the resource cards that are depicted on the golem card, stack them underneath it and then put the deck into your scoring area. The summoned golems are what earn you points at the end of the game, while runes give you bonus points, depending on the golems you have collected. Finally, gems are the currency in the game.

It all sounds quite simple, but there are a couple of things in Golems that I haven’t seen in other games so far.

First of all, there is a 3×3 grid of cards that you can draw from. However, you can’t just take a card, but you need to pay gems. That’s not new, of course. Payment is in the form of putting a gem each onto the other two cards in the same row, i.e. the two cards that you didn’t take. Again, there is nothing new here. Many other games also require you to put money onto the cards you don’t choose.

Where Golems is different is that, when you take a card from a row with only two cards in it, you move the gem off of that card onto the remaining card, leaving the last card in that row with two gems on it. So taking the second card in a row is basically free, which is nice. Finally, when you take the last card in a row, you also take the two gems back into your supply, thereby making the third choice in a row fairly lucrative.

So you do need to think about whether the card you want is actually worth it. If it’s the first card in the row, it’s quite expensive, but that might be worth it for you. Alternatively, you might want to take all three cards in a row, which also ends up costing you nothing, because you pay two gems for the first card, you pay nothing for the second card and you get back your two gems when you take the third card. In a way, Golems is more about deciding which row has the best cards on average and choosing that, rather than thinking about individual cards.

The other thing that is different in Golems is that there is a closed economy. OK, that in itself isn’t new, but in this game, when you draw a gem card to take gems, you take them from the other player, if there aren’t enough gems left in the supply. So it’s impossible for a player to have a monopoly on gems. Everyone is encouraged to re-invest their gems into cards. It’s a lovely little thing, which won’t necessarily become an issue, because you do have to spend gems, but it’s there and is something you need to consider.

I’ve played Golems only in solo mode, but it can be played with two people and if you do that, you can also add the mini-expansion to give you a bit more variety. In the solo game, after buying 5 cards during your turn, the rest is given to the “opponent”. Any golem cards will count as summoned, meaning they will score two points at the end of the game, plus an additional 2 points for the golems of a specific colour, as decided randomly at the beginning of the game, while every set of two runes counts as 3 points. Gem cards are worth nothing to the opponent, but gems collected from you are worth 1 point.

For yourself, you need to summon golems, which also score you 2 points, plus another 2 points if they match the colour you were randomly assigned at the beginning. Runes don’t give you any points, but gem cards can score if you collect a few of them. The real points for you come from the resource cards that you used to summon each golem: 1 point for every card.

I have played the game a few times now and have so far not beaten the opponent. They tend to score in the 40-50 point region, while I only get to around 20-40 points. It’s not easy, because you can only buy 5 cards on your turn, the rest goes to the opponent. So you usually only summon 3 or so golems before the game ends. However, I’ve not given up yet.

In fact, as a solo game, Golems is really addictive. That’s me saying that, someone who isn’t a solo player really. The game is set up pretty quickly and usually over in 10 minutes. The cards are beautiful and it’s really satisfying putting the plastic gem tokens on the cards that you don’t buy or taking back the two gems from the last card in a row. It’s quite a visual and tactile game in that respect.

It does take up a bit of space on the table though, so is probably not suitable to be played on the train or in a pub, let alone on a plane. However, it’s great as a game you can quickly play by yourself during your lunch break. It’s a lovely little brain teaser that gets you thinking without being too taxing.