We had been on this planet for decades now, exploring its riches, mining for crystals and ore, building factories, markets and other public buildings, growing our pool of experts and increasing our commerce. Now it was time for the steam guilds to move to another section of the amazing planet Tharos by Spielworxx. 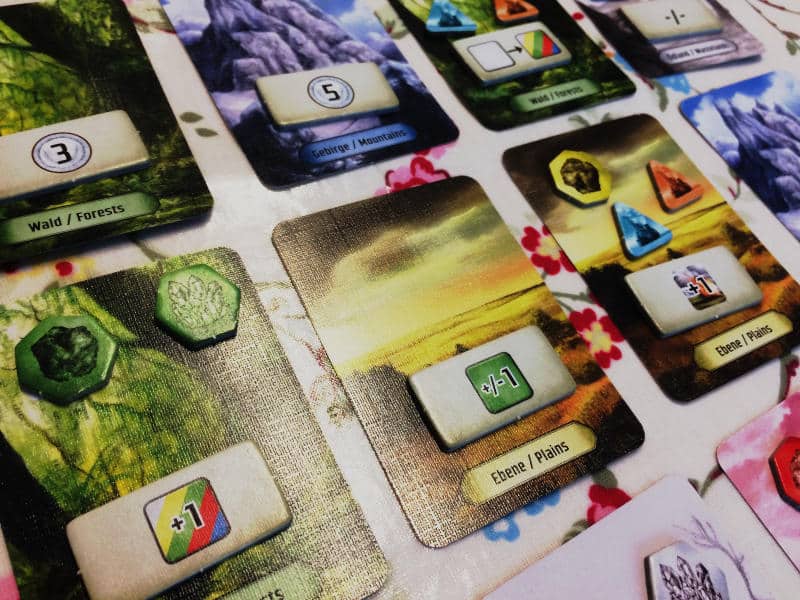 I don’t really know where to start with this game. I had backed it on Kickstarter and couldn’t wait to play it. Here was a dice worker placement game with a bag building mechanism, plus some tableau-building thrown in. There is certainly a lot to take in when you first play the game and the rulebook reflects this. There are around 16 A4-sized pages to read and digest. There are a lot of illustrations to try and help, but personally, I have always struggled with Spielworxx‘s rulebooks, unfortunately – but maybe that’s because I’m not used to rulebooks for heavier games.

Teaching the game is also not a quick thing and I don’t really think Tharos is the sort of game you can just start playing. Mind you, that’s what my wife and I did during our first learning game, but you really just take stabs in the dark and do things that seem interesting, without having any idea of how useful they will eventually be.

So, in reality, you do need to cover everything at the beginning to give players a fighting chance of making meaningful decisions. Even then, because there is so much to take in, people will still ask questions during the game and it will take probably half of the game to really start to settle.

That’s not a problem, of course, because Tharos is a complex game and should probably be considered as a so-called heavy game and these types of games will take a while to learn and understand. It’s one of the reasons why I did choose to back the game in the first place. I had a hankering for something more beefy and demanding.

Also like other heavy games, Tharos takes up quite a bit of space on the table, but it does look really colourful and the illustrations by Harald Lieske are really fitting and help you immerse yourself into this world of steampunk. Generally, the components are of really good quality, with thick card stock for the cards, really thick cardboard for the player boards and cardboard tokens and numerous wooden dice in five different colours that feel wonderful in your hand and are a joy to roll.

Yes, as I said, you roll dice in this game and the dice results decide what you can do on your turn. It’s a classic dice worker placement game in that sense, except that you place your dice onto your own action spaces, so there is no blocking other players or any other direct player interaction of that sort. Different actions require different amounts, colours and pip values of dice, so you do need to think about which dice you use for what and there are never enough dice to do everything you want to do.

There is another element to the dice though and that’s the dice bag. You start with 12 dice in your bag and draw 5 to be used for actions. Once the dice are used up, they get put to one side and you draw another 5 from the bag, thereby depleting your pool of dice little by little. Once you used the second set of 5 dice, you draw the last 2 dice, put all used dice back into the bag and draw 3 more to give you the 5 dice you need.

It works very much like deck building in that respect and you can buy more dice to add to your pool, allowing you to influence how many dice of a particular colour you have available and consequently affecting the likelihood of what dice you will draw from the bag. It also means that you will be able to tell which dice are left in the bag and try and make decisions based on that.

However, unlike in many deck-building games, in Tharos there is no such thing as bag thinning, by which I mean, you can’t remove dice from your pool. So you will always be stuck with the same dice and you can only add to them. Any dice that are not useful to you will remain and slow you down.

Luckily, there are ways to give you some control over your dice. You can play cards that allow you to change the pip value of dice or use dice of one colour as if they were another colour. That does give you more flexibility, but of course, to get those cards played, you have to use dice of a specific colour. It’s certainly a conundrum, because the dice you need to get a helpful card ready may be the same dice that you desperately want to play a certain action. So you have to decide between one or the other and because of the bag mechanism, you may not see those dice again for a while. It’s tricky.

There is a lot more to Tharos of course. In order to gain victory points and win the game, you can: place mines, which are worth some points if you have enough on the map; you can place shields, as we call them, onto the map and if they’re in a certain configuration, you can retrieve them to turn them into points; you can dig for ore and crystals which you can trade for points; you can build buildings and cards to get points; and you try to defend yourself against attacks and if you do, you can get points.

As I said, there is a lot to take in, which I think is what is the attraction of Tharos to many people. Your brain starts to hurt quite quickly, because you constantly need to decide which dice you use for what and in what order. You need to make some rough calculations about how many points there are in it for you. At the same time, getting certain points is impossible before certain cards have been played, and even though cards do give you points, it’s what they allow you to do that’s the real benefit and that’s where the points are likely to come from.

It’s a constant if-this-then-that-then-this-than-that in your head. It’s a big, constantly changing puzzle, based on the dice you have drawn from your bag and the pip values they show after you’ve rolled them. It’s strangely addictive, if you ask me, and it’s because my wife and I have played the game quite a few times now and will keep playing it many more times to come.

At the same time, there is a lot in Tharos that may put some people off.

Player interactions are absolutely minimal. You can try and dig ore or crystals that you know someone else is likely to want, but that is only possible if you have the right dice of the right colour. Public buildings can be owned by a player, giving them a couple of coins of income if another player uses them, but those two coins really don’t make a huge amount of difference. People who like heavy games often also want a lot of player interaction where one person can influence another person’s ability to do what they want in a large way.

These same people also won’t like the huge amount of luck in Tharos. Even though you know which dice are left in your bag and you can buy additional dice, at the end of the day, if you don’t draw the right colours, then there is only so much you can do. Additionally, you then roll these dice and if that doesn’t go your way, then there is also little you can do, even if you have access to cards that allow you to influence the colour or pip value of dice.

There is another element of luck, which I haven’t mentioned yet. There is a deck of 40 so-called action cards. These give you one-off actions or other benefits, which can be hugely powerful if you get them at the right time, or they can be absolutely useless. The trick is to keep drawing more of these cards to even out the luck factor and chances are you will get at least one card that will give you something really useful. Ultimately though, it’s pure luck if you get what you want and it costs you a dice, so you do need to think about when to draw more action cards.

There is also luck when it comes to defending against attacks. If you don’t survive an attack, a card is drawn from a deck of penalty cards that decide your fate. You might lose some money and you might be lucky if you don’t happen to have any money at the time, or you might lose cards or mines or something similarly valuable. The penalty gets harsher the later it is in the game, but ultimately, it’s luck if you are forced to remove something that you need or if you just don’t happen to have it and are therefore unaffected by the damage.

As I say, there is a large amount of luck in Tharos and heavier players will probably not like that.

The thing is, it’s exactly these reasons, the lack of player interaction and the amount of luck, that my wife and I enjoy the game so much. We enjoy playing competitive games, as long as we can’t really attack each other. After all, in a 2-player game, attack always means the other player. There is never a choice between who you attack. So it becomes very direct and mean and is just not enjoyable. So, for the two of us, Tharos offers just that and the luck just means that we both have a good chance of winning.

Saying that, people who want a game with little player interaction and a fair amount of luck probably also look for games that don’t take too long to play. Unfortunately, Tharos is on the longer side. My wife and I manage to play a game in under 2 hours, usually around 1 hour 45 minutes. That’s not short by any measure and even though it works for us and we’re happy to just play a round or two and leave the game set up to continue on another day, people who enjoy lighter games might not be interested in that.

So it’s a bit weird to me who Tharos is really for. You have to persevere through the long rulebook and learning the large number of actions you can take and the other rules, which is a barrier for lighter gamers, while heavier gamers just don’t get the meaty game they’re probably looking for.

Yet, Tharos is my wife’s and mine new favourite game, because sometimes having a longer game that really occupies your brain and forces you to focus and think about your actions is exactly what we want and need. Drawing dice, rolling them, placing them on their action spaces, placing markers, playing cards and everything else are such wonderfully tactile actions that really draw you in and want you to play again, because maybe, just maybe, next time your dice will be on your side.