Our spaceship had safely landed on Mars and it didn’t take too long to convert it into our base station. A few other corporations had done the same and we could just about see them in the distance. There was even an embassy station that was there to try and keep the peace. However, we were quite some way off thinking about politics. All of our energy was spent mining resources so we could build tunnels and other buildings to grow our settlement and increase our population. It would take a long time, but eventually, we would finish project Migration: Mars by Enhance Games. 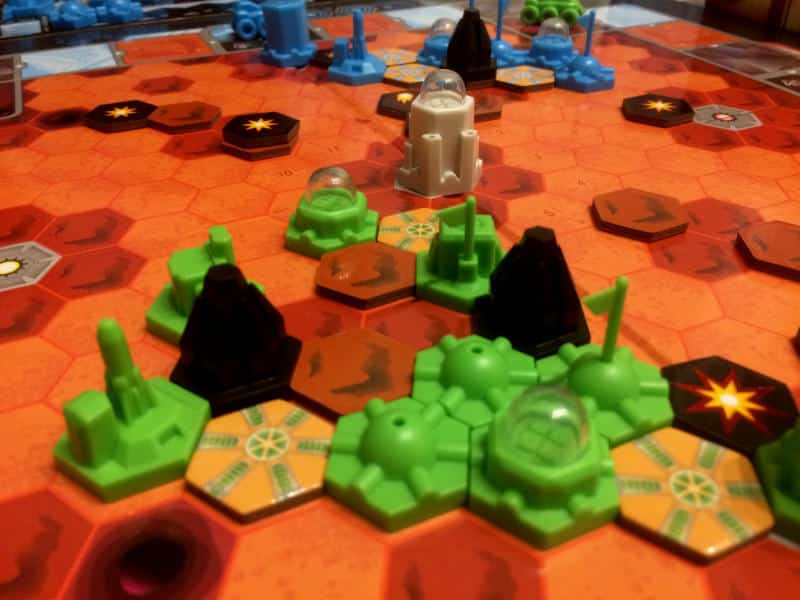 I was really looking forward to this game. I had backed it on Kickstarter and my expectations were especially high, because here was another game where your task was to settle on Mars. For some reason, this setting really appeals to me and makes my imagination go wild. I was looking forward to a game where you were barely surviving and toiling away to extract the resources you needed to expand your settlement while also keeping everyone alive. The way I imagined the game was that air, water and food would be scarce and the risk of asteroids or other space events was going to be ever-present. Every step forward would be a real achievement.

So, yes, my expectations for Migration: Mars were very high and of course, the game didn’t meet them. That’s no surprise, really, because it would have been hard for any game to tick all the boxes for me. As it would be unfair for me to compare the game against my expectations, I will review it like I would any other game. That way you can decide for yourself, if the game is for you, even if it turns out not to be for me.

In Migration: Mars, every player starts at a specific location on the surface of Mars where they place their HQ, or starting habitat. The game board, which represents the surface, is completely symmetrical for four players. So it doesn’t matter which of the four staring spaces you choose. If anything, it only matters where in relation to other players you begin. In a two-player game, for example, the game wants you to sit opposite to each other and start at opposite ends of the board.

Everyone also gets to place a tunnel for free, so from the start, you have to make a decision about whether you head for the embassy in the centre of the board or if you want to explore the edges of the board, where you might come across ancient ruins, which hint at alien life having visited Mars some time in the distant past. You also have to navigate the terrain, because some spaces can only be occupied by a tunnel as they are too unstable or difficult to build a building on.

The board is divided into hex spaces and you expand your settlement by placing new tiles adjacent to an existing one, as you would expect. In addition to dealing with the features on Mars’ surface, you also can’t place buildings right next to each other, but have to separate them by at least one tunnel tile. That is, except for habitats that need to be placed right next to life support centres, which makes thematic sense, of course.

As you can tell, there are a lot of things to consider. You can’t just expand your settlement whichever way you want. In fact, a large part of the game is about thinking about where to put things. It is possible to build yourself into a corner and make winning the game a lot harder for yourself, if not even impossible. It’s something that the rulebook doesn’t point out, but is something that new players will have to learn for themselves.

Speaking of blocking yourself in, because everyone expands on the same map, it is possible to build towards another player and try and make it harder for them to place tiles where they want them to. However, it does take a concerted effort to interfere with other players and I doubt it would be actually beneficial to yourself to do so. You’re better off heading towards the centre of the board and try and connect your settlement with the embassy, which is neutral, but allows you to put one of your population there – and you need to have five population and survive your turn to win the game.

So you need to figure out what buildings you want to build when and where. Every building costs resources, but some buildings give you protection or other benefits. Factories produce so-called RCU, which allow you to build tunnels for example, while hospitals provide room for population in case of a meteor strike or other event.

The problem is, apart from buildings that produce something, the resources you get depend on a dice roll. Around the outside of the board is a resource track. You will move your rover player piece along this circular route as many spaces as a D6 tells you and then collect a certain number of the resource that you landed on, based on another six-sided dice. It feels a lot like Monopoly and you have very little control over where you are going to land and what or how many resources you will get.

Speaking of the game reminding me of other games, I was also very much reminded of Catan, or Settlers of Catan as I know it. At the beginning of your turn, you can freely trade your resources with other players or if you have built the export station building, you can trade with the bank. You then use resources to pay for buildings and expand your settlement on a hex board. No, there is no “longest road” or “biggest army” in Migration: Mars, but still.

Given the similarities, I have taken to call the game Settlers of Catan Monopoly on Mars. I think that’s a fair comparison.

There is even more randomness in Migration: Mars, because there is an event deck – and that also reminds me of Monopoly, of course. A lot of the event cards give you some sort of one-time bonus or there is a meteor strike that hits the board at a certain point based on rolling more dice. So, if you’re very lucky, you get everything you need from those events and avoid every meteor strike – or you might be unlucky and basically have no chance of winning.

Even winning the game will depend on luck. You might have the required five population to win and enough water to “feed” them, but if an event card is a meteor strike and that meteor hits one of your habitats and that habitat doesn’t happen to be protected by an ancient ruin, then you lose one population and you don’t win the game. You just have to try again. It’s very random indeed.

Of course, the hope is that the randomness evens out over time, but just be aware that there is a lot of luck in Migration: Mars and if you’re not a fan of this level of luck, then maybe the game isn’t for you.

The game does look nice on the table though. It comes with 3D plastic buildings and little flags that you stick into a habitat to represent your population. So you can see your settlement grow in front of you and it’s very tactile when you have to remove a population or building.

However, overall Migration: Mars is really a mix of roll and move to get resources and some resource management. It’s really quite pleasant and the sort of game you can play with the whole family. It’s the same sort of level of difficulty as Settlers of Catan, so if you like that game, you will like this one too.