The bazaar was busy. Traders were displaying their colourful wares on their rickety stalls, shouting into the crowd how they offered the best prices and the best quality. It was mesmerizing to watch, but I had to focus and make sure I found the goods I needed to exchange for rubies. If I could get six rubies before everyone else, then I would be the best trader in Istanbul: The Dice Game by Alderac Entertainment Group. 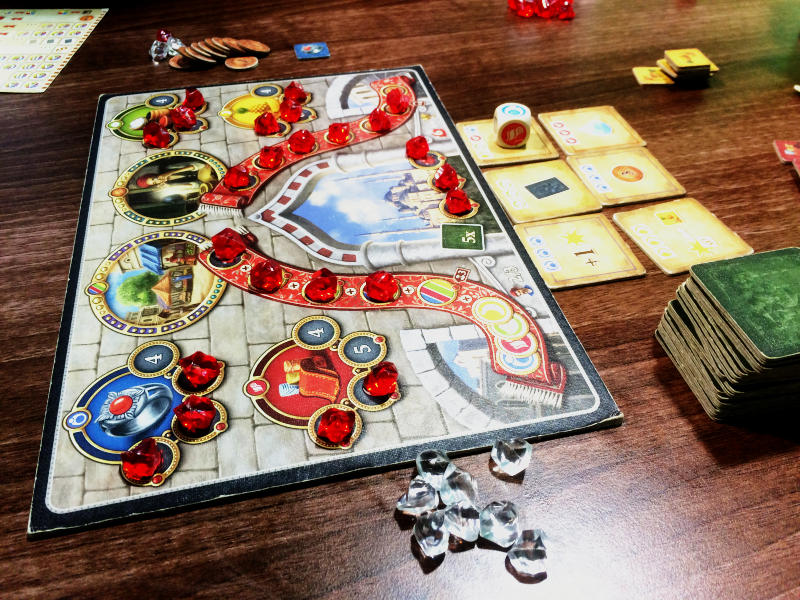 If you have played Istanbul, the full worker placement game, which I haven’t, then you will probably feel right at home with this dice rolling variant. Your aim is to be the first player to collect a certain amount of rubies, based on player count, which sounds simple enough. It is certainly relatively simple to start with, but as the game continues, getting hold of a ruby gets harder and harder.

The whole game is based on rolling dice, as you can probably gather from the title, and using them to carry out up to two actions on your turn. You have to split the dice into at least two groups and depending on the action, you’re either trying to get several dice with the same result or sets of different dice. You won’t always be able to use all dice and sometimes you can apply the dice to only one action and have to forego the other, but pretty much always there is something you can do.

At the core, Istanbul: The Dice Game is an engine-building game, because even though it’s relatively easy to get hold of a ruby at the beginning of the game, you can’t just rely on the dice to give you what you need to add more rubies to your stash later in the game. You need to try and get extra dice or special tiles that give you extra powers or you need to try and store goods in the form of cards, so you can add them to your dice results to be able to trade the dice and the cards for one more ruby.

There is also a lot of player interaction in the game, not in the sense of being able to steal other players’ goods or bonus action tiles, but more in the sense of when one player trades in their dice and/or cards for a ruby, the next player now has to pay more dice and/or cards to get a ruby from the same space. It sort of emulates market forces, where goods become more valuable, the less there are available. So if you trade four pineapples for a ruby, the next player will have to pay five pineapples, the next six and so on.

There is also positive player interaction in Istanbul: The Dice Game. If you draw an action card, other players usually also get a bonus, not just you, but of course, you get a better bonus than everyone else. I think that’s a nice touch and this deck adds to the randomness of the game.

In fact, there is a lot of randomness in the game and even though I appreciate that you’re heavily reliant on your dice rolling luck, you also have to be clever about when to use the dice to improve your engine and maybe forego an action and when to maybe take two less powerful actions instead. It’s all about tactics and making the best of your dice results every turn to stay in the game.

The advantage of everyone rolling dice and all the other randomness is, of course, that over time, the levels of luck will even out and throughout the game it’s rare that one player is way ahead of everyone else. On average, players are maybe one or two rubies apart, but there is always a really good chance to catch up again.

Istanbul: The Dice Game also plays very quickly and is pretty easy to learn. We learned it one afternoon in a games cafe and played it several times. It took us maybe one game to fully understand all the different actions and how the dice worked, but after that, we whizzed through game after game. It’s really addictive to play, probably due to the dice rolling and other luck elements, and everyone won at least one game, making it a very fun experience overall.

So, if you’re looking for a quick game with lots of luck, but also a good amount of tactics, which keeps you thinking but isn’t too overwhelming, then Istanbul: The Dice Game will not disappoint.