The room was buzzing. Paintings of different sizes and in different styles were filling the walls, all beautifully lit to bring out every detail and make them really shine. People were mingling and chatting, waving their champagne glasses around as they were discussing the style, composition and imagination displayed in the variety of art. Suddenly, it went silent and everyone turned their attention to the gallery owner in the middle of the room. It was time to choose the best piece of art on Canvas by Road to Infamy Games. 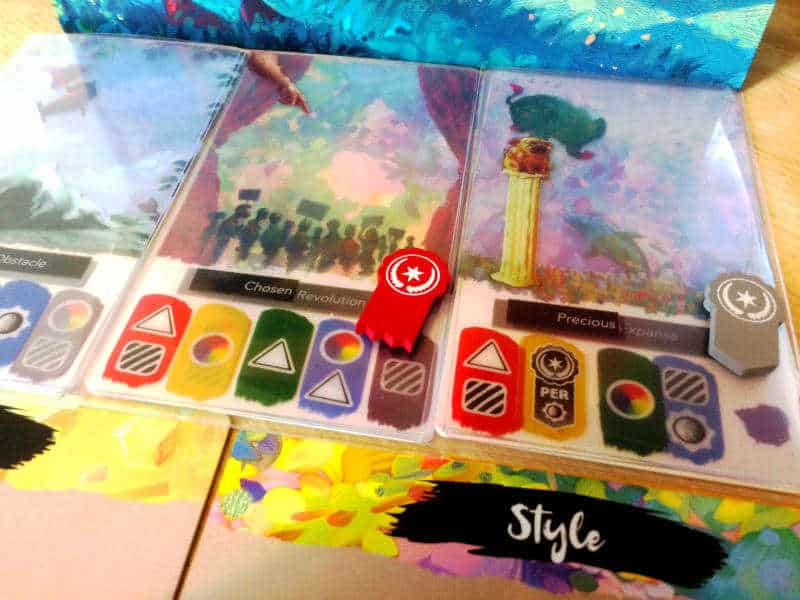 There are a lot of creative people and painting is a popular past time. I have tried it myself, but oil or acrylic is quite a difficult medium to master. I am more adept with a ballpoint pen, sketching a landscape in black and white. So a game where you try and create a unique and imaginative painting is going to appeal to a lot of people, myself included.

Canvas comes with a big stack of transparent cards, each of which have an element of an imagine printed of them. You can overlay these cards to create different compositions and combine them with a colourful background to create a complete painting. The possibilities are almost endless and before you even start to play, everyone just wants to keep making their own piece of art. Take an background card with blocks of shades of purple, add a balloon, some raindrops and a city skyline and, hey presto, your own modern artwork has been created.

Of course, in the game itself, it’s not quite as simple as that. It’s not like you can just choose your favourite combination. Instead, you’re trying to fulfil certain objectives. The more objectives you can meet with each picture you create, the more rosettes you get, which are converted into points at the end of the game.

These objectives come from a relatively large deck of cards and include scoring a painting based on variety, composition, emphasis or repetition. Intuitively you think that a painting with multiple elements of the same type should score high for repetition. So you look for as many overlays as possible that have a toy in it maybe. Or you think that composition is about having good spacing and a good layout of elements in your final painting.

However, these objectives are lot more basic than that.

At the bottom of every transparent overlay, there are a certain number and type of symbols. As you stack these overlays on top of each, some symbols will get covered up, while others get added. To create a picture, you overlay exactly three transparent cards, and if you end up with the right combination of symbols, you score one or more of the objectives.

It feels rather abstract unfortunately, because all you’re doing is looking for a certain number of triangles or exactly one colour wheel or maybe one hashed square, a sun symbol, a colour wheel and a triangle. Ideally, you want one of each, but also two triangles, so you can score multiple objectives at the same time.

What starts out as a fun game where you try and create three beautiful or interesting paintings, ends up being a brain-burning exercise in finding the right combination of symbols from the available overlays, so that you get as many rosettes as possible. Within two or three games, you stop looking at the art and only focus on the symbols at the bottom. The game tries to keep you thinking about and looking at the final piece of art by asking you to read out the title of the painting that you have made, which is also created through the overlays, but really all you want to do is score the painting to see how many rosettes you are due.

It’s a real shame, because Canvas had so much potential. When I first saw the Kickstarter campaign, my imagination was going into overdrive. I was really looking forward to a game where you’re encouraged to create beautiful artwork, using transparent overlays that give you endless possibilities. Yet that’s not the case here. The spell of Canvas is quickly broken and all you worry about is trying to get the right overlays to get the right combination of symbols to score the most points.

It’s doubly disappointing, because the artwork in Canvas is really beautiful. A lot of thought has gone into selecting the right sort of elements that allow you to create imaginative paintings. The abstract backgrounds add another layer that encourages you to play around with the overlay cards and background cards. Trying to make an imaginative painting out of the overlays is a lot of fun. Flicking through the overlay cards is enchanting. You have so many different elements and there are so many different paintings you could make. Yet, it’s almost more fun just making pictures rather than actually playing the game.

Saying that, I did enjoy playing it and I will play it again. However, I now see Canvas as more of an abstract puzzle game and not a game of imagination and creativity. It is very clever how the symbols on the overlays work. It’s not easy to get the right combination for the scoring objectives. It is clear that a lot of thought has been put into the arrangement of the symbols. Depending on how the overlays come out, you will sometimes curse that you just can’t score anything, while other times it seems almost too easy to achieve the objectives laid out in front of you.

So, if you want a brain teaser that’s not too taxing, but will still keep you thinking, then Canvas is definitely for you.