Our peace had been shattered. We had been living underground for centuries, happily going about our daily chores. We had spread across many moons around the planet and were very content and happy until one day a meteor impacted and threatened everyone’s lives. It was time for us to come above ground and start mining our moons for resources, so we could build new technologies that would save us. We were able to communicate with the other moons and co-ordinate our efforts, so we were hopeful. Yet, time was running out and we had to be quick and efficient if we wanted to escape our doom and flee to Uranus by The Dark Imp. 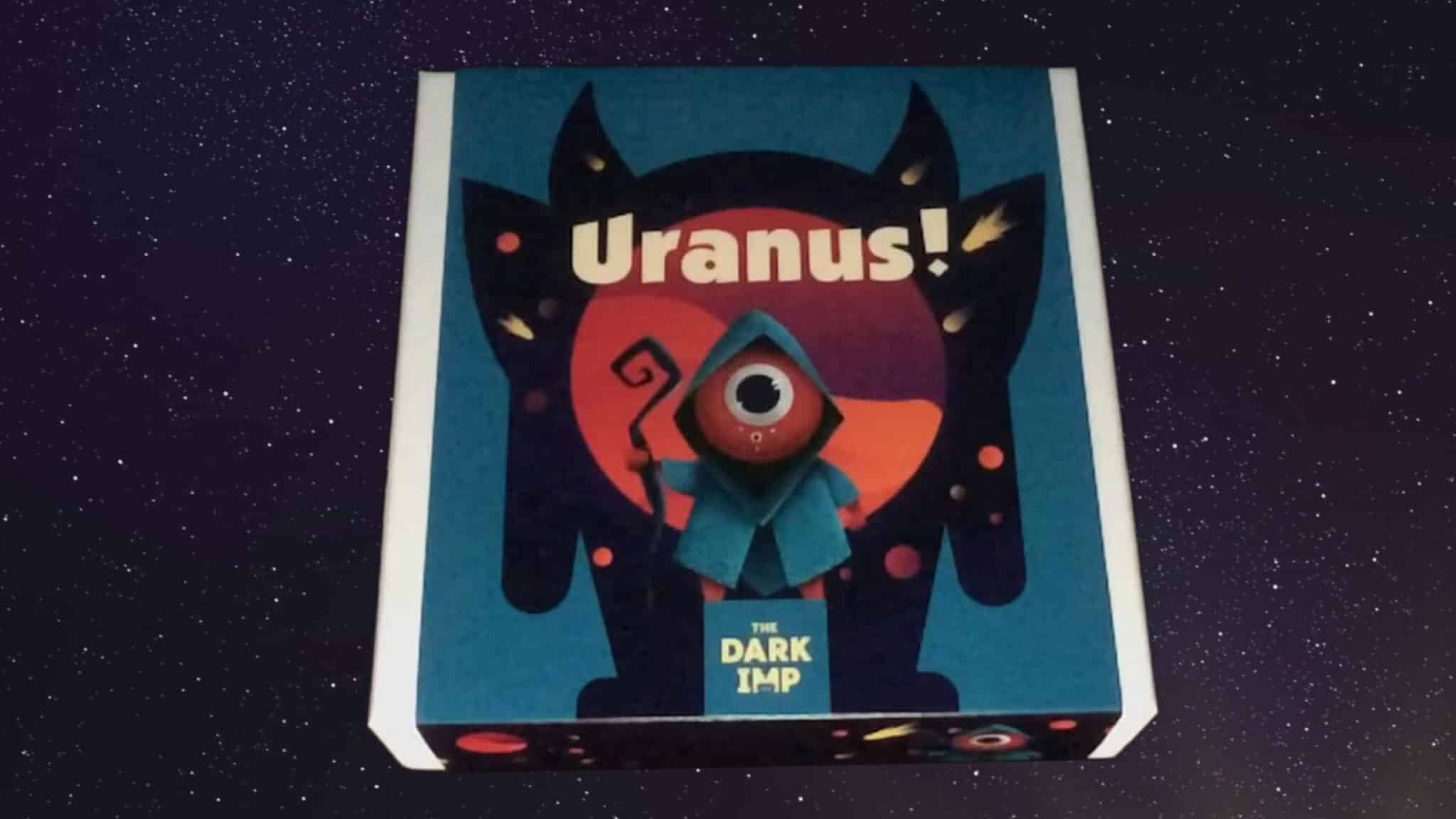 Yes, here is another game from the wonderful Ellie Dix of The Dark Imp. Their games are always family oriented, trying to be accessible to as wide a range of people as possible. So whether you’re an experienced player or are completely new to modern board games, you will enjoy their games.

Uranus! is no different. It won 3rd place in the 2020 Board Game Workshop Design Contest, which is a huge achievement and proves that the game can compete with a large variety of game styles. So once again, congratulations to Ellie.

In the game, you all work together to try and build mines and connect them with tunnels, so that you can harvest the right combination of resources to develop new technologies and otherwise advance your moon people, so that eventually you can build rockets and flee to Uranus, where you will have also built shelters during the game.

It’s the usual puzzle of deciding what to do when and in what order. Resources can be used for so many different things, all of which are important, but you don’t have enough to do them all. So you have to slowly build your engine and do whatever you can to reach the goal.

So while everyone does their own thing on their own moon and tries to get their people onto Uranus, you’re not competing with other players. You work together to build shelters on the planet that you can then live in, once you’ve managed to get off your moon. However, the game only ends in victory if everyone has successfully escaped their moon. So just because you made it off first, doesn’t mean you win. You all win, or lose, together.

Every player takes on the role of a unique race, each of which has some specific abilities. So even though the rules are the same for everyone, every race has a rulebreaker or two or they find it easier to achieve certain goals. So your race may already be able to build rockets, while others can’t, but then other races might be better at something else. So you do have to try and find the right way of working together, so that everyone benefits from each race’s special abilities.

On your turn, you basically get certain types of resources, based on the mines you’ve built. However, one resource alone won’t achieve much, so you have to build tunnels, so that you can combine the resources to allow you to do more things. You also need to build more mines, so that you get enough resources to achieve the bigger goals.

The problem is, if you link up all your mines to create one giant mix of resources, you end up with waste, or spacejunk, as it’s called in the game, because you have to use all resources together and can’t split them up for separate actions or upgrades. The spacejunk will cause trouble and may undo some of the hard work you’ve put in up to that point.

The other threat comes from meteors which will impact all the moons at certain points in the game. They will literally obliterate whole sections of your moon and destroy mines and tunnels. You have a little control over the orientation in which a meteor impacts, so you can usually reduce the damage, but you’re still going to be set back.

There is also another big threat. If the volcano on your moon gets hit twice, it starts to erupt. The lava will start to spread slowly, but speed up more and more each round, until eventually it’s too late.

Like in so many co-operative games, there are more ways to lose than they are to win. The odds are stacked against you and even though it looks impossible to win, the more you play, the better you get. Also, you may prefer to place certain races, as they may work better with your play style or give you valuable benefits that reduce the risk of losing. Of course, that also means you can increase the difficulty when you think you’ve mastered the game.

There is one more interesting thing in this game, which makes it almost feel like a roll-and-write. Your player boards and moons have a coating that allows you to write on them with dry-erase markers, which are supplied with the game of course. You literally draw the mines and tunnels on your moon board, you fill in sections that have been hit by a meteor or that are filled with lava. You record the number of resources you’ve collected and assigned to different actions or upgrades, and then wipe it off again as you use those resources.

It’s really interesting and somehow makes the game more fun than having heaps of resource cubes in front of you, like you would in other games. Mind you, the game still comes with a huge bag of coloured wooden cubes, representing the different resources (see my unboxing video for more details) and you put those cubes on your moon board in the production phase. So you still get to play with resource cubes.

The game offers just enough complexity to get you thinking and it will give the more seasoned strategy game players plenty to keep them occupied, while at the same time not being too complex and allowing people who are new to the hobby to learn about resource management and co-operative play.

Of course, the risk of an alpha player is present in Uranus!, just as it is in most co-operative games. However, chances are, everyone is so busy with their own moon, that they have little time to tell others what they should or shouldn’t do.

I think, Uranus! is a lovely game that’s really well produced. It deserves taking a podium place in the Board Game Workshop Design Contest and you should take a closer look.