The last time I checked my board game player profile on Quantic Foundry was back in April 2020, so nearly a year ago. So I thought, it’s time to run through the questions again and see if much has changed. You can check yours as well. Just follow the links at the bottom of this article.

Let’s start with the graph itself: 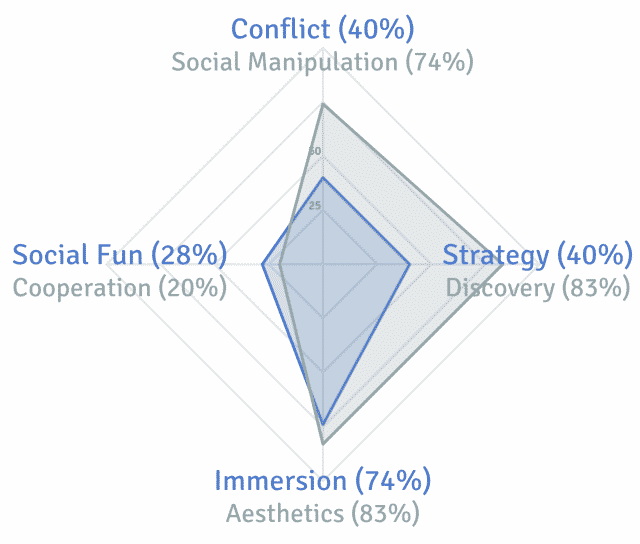 One thing that sticks out immediately to me is that discovery and aesthetics have gone just right up, to 83%. Back in April 2020, discovery was at around 40% and aesthetics at around 45%. So it’s clear that I want to be much more drawn into the game. I prefer games that allow me to explore and that look amazing.

I think that’s actually very true. I’ve always liked the look of games, but that’s become a stronger influence for me now. Unsurprisingly, I launched the podcast series Let me illustrate where I feature a different board game artist every two weeks. It really confirms that I want games to look great.

To back up that I want to be drawn into games more these days, immersion has gone up from around 35% to nearly 75% now. That’s over double, showing how much I want to play a game that takes me away into its own world and allows me to focus my thoughts on things other than the day-to-day worries.

I guess, it’s understandable given the current situation, where we can’t go out or meet friends, but are stuck at home and are worried about our health, our jobs and our families and friends – and probably a lot more. Games have clearly become an even bigger escape for me now.

Social fun has also gone up, from around 10% in April 2020 to nearly 30% now. However, it still seems rather low. I do love the social aspects of games, whether I’m playing with family or friends. I like the chat, the banter around the table and just “being” with other people, even if it’s virtually at the moment when playing with friends. I would have expected the value be at maybe around 80%, but there we are.

Conflict has gone down slightly, from around 50% to 40%. So I still like conflict in games, but not quite as much as I did before. That’s about right, because I’m not a player who likes to be mean to other players, but I enjoy games with a good amount of player interaction.

Co-operation has remained the same. Depending on who I play with, I do like co-operative games, but I guess in general I prefer competitive games.

So, yes, that’s my latest board game player profile. I do always find it interesting to see how my profile changes over time. You can see all my previous results by following the links below – and you can complete the survey for yourself for free, again just follow the links below.